Colm Meaney on shooting in the pandemic: ‘I’ve been tested up the kazoo’ 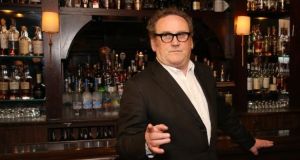 Colm Meaney: I do miss a good pint. You genuinely can’t get a good pint of stout anywhere off the island of Ireland. It doesn’t matter what they say. Photograph: Walter McBride/WireImage

One can scarcely imagine a face more likely to coax you back into the theatre than that of Colm Meaney. It thus made sense for Michelle King, head of Performing Ireland, to have that actor front a video celebrating the forgotten theatre workers who have been sent home during the pandemic.

Directed by actor Simon Delaney in the Olympia Theatre, the clip sees Meaney playing barman, popcorn salesman, box-office clerk and himself. The film acknowledges that this will be “a journey of many parts”.

“It was just to raise awareness of the theatre generally,” Colm tells me. “But particularly about the backstage and front-of-house people. The performers are often talked about, but people don’t often talk about those other people who are essential to the running of the theatre. That is a good angle to take. When I was in Dublin recently there was debate about pubs and about sports. I didn’t hear anybody on radio mentioning theatre.”

Has he got a sense, talking to friends and colleagues, of how the lockdown has affected those theatre workers who don’t get their names in the programme?

“Yes. It’s been devastating,” he says. “And those people are not as well paid as some actors. They don’t have that cushion. Obviously, that’s not there for many actors as well. They are all in bad shape.”

Large parts of the screen and theatre industry were sent to sleep at the end of March. Film production is creeping back into action, but theatre, which relies on the presence of an audience, is finding it harder to return to normality. Meaney recently spent time wandering the empty streets of the West End of London. The theatres there didn’t close during the Blitz. No such total shutdown has happened since the plague years.

“The whole of the West End is dead. The whole of Broadway is dead,” he says with a sigh. “I was staying just off Piccadilly and the back street of the hotel went by the stage door where I had done Cat on a Hot Tin Roof a couple of years ago. The stage door is barred and bolted. Also, rubbish is piling up. It’s as if it’s derelict. It’s very sad to see that.”

So what needs to be done to restore audience’s confidence? It’s no good staging events if the punters are still nervous about gathering in public spaces?

Even before the world knew his name, Colm Meaney was a familiar face on film and television

Colm Meaney is not used to enforced time off. He has been working pretty steadily since the acting bug took him as a young man. Raised in Glasnevin, the son of a bread van driver, he doesn’t know where he got the idea to go on the stage. He was working as a lounge boy in the Parnell Mooney pub when he spotted Donal McCann, then doing a show at the Gate, and he bravely asked him the best way to get started. McCann pointed Meaney towards the Abbey School of Acting and the young man was away. He worked with our National Theatre. He toured Britain with John McGrath’s radical 7:84 theatre company.

Watching Meaney scrutinising tickets and serving drinks in the Performing Ireland film, I imagine him remembering his own youth. In my experience, those jobs are often done by up-and-coming actors.

“The closest I came was when I was in the School of Acting at the Abbey,” he says. “In those days they would use us as hands, in stage management. You’d do the props and then maybe have a walk-on part. That’s the closest I got.”

Even before the world knew his name, Colm Meaney was a familiar face on film and television. You can see him on episodes of Remington Steele and Moonlighting.

In 1987 he made an appearance as Miles O’Brien in the pilot episode of Star Trek: The Next Generation. The character became popular and ended up as the lead in Star Trek: Deep Space Nine. Irish audiences may think of him serving fried nappies in Roddy Doyle adaptations, but much of the world still imagines him manning a space station in the 24th century.

Looking back at the CV, I wonder if he can remember the last time he had to take any non-acting job.

“It makes for a very boring interview. Actors have great tales about the problems they had. But I never really did anything else from the time I went into the Abbey. I have never done anything else. When I was in the School of Acting I did have a job as a customs clearance clerk on Merchants Quay. I had a motorcycle and I’d run up and down to the docks with documents. That was about it.”

His unusual period of downtime has now come to a close. As we speak, Meaney is in England shooting a comic horror called The Little People for Jon Wright, who directed Grabbers some years back. All kinds of new normal have set in. In just six months, the industry has had to change its practices more radically than it has done over the preceding 50 years.

“I have been tested up the kazoo,” he says. “I was tested before because I was in Dublin for a month. I was tested twice here this week. Where we are shooting is very close to the Leavesden Studios where they are filming The Batman. They started shooting again there last week and then Robert Pattinson came down with the dose. So they had to shut down.

I do miss a good pint. You genuinely can’t get a good pint of stout anywhere off the island of Ireland

“So, our guys are very paranoid. We wear masks to and from the set. The actors have to take them off during takes. We are in a bubble. I can maybe go to a grocery store, but it’s basically from hotel to work and back.”

Meaney lives an impressively international lifestyle. He has been married to French costume designer Ines Glorian since 2007 and home life is shared between Los Angeles and the Majorcan town of Sóller. “My wife does not like Los Angeles because she’s French and she much prefers being in Majorca,” he says with a giggle.

Lockdown was spent on that island, but he got back to the old sod reasonably quickly. No trace of America (or Spain for that matter) has rubbed off on the Meaney persona. He still seems as much a Dubliner as ever. What, aside from family, does he miss most when he’s away?

“I am never away long enough to be melancholy about the place,” he says. “I am in Dublin four or five times a year. But I do miss a good pint. You genuinely can’t get a good pint of stout anywhere off the island of Ireland. It doesn’t matter what they say.”

Just Like You: Nick Hornby’s contemporary love story nestled in a Brexit novel
9