Corneliu Porumboiu: From a whistle to a screen 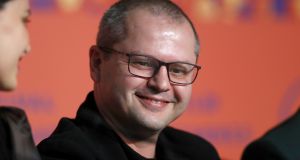 Corneliu Porumboiu: ‘I came to the cinema quite late. I was 19 years old and I was studying management in Bucharest before I started going to the cinema. And then I saw La Dolce Vita.’ Photograph: Getty

Silbo Gomero, or “Gomeran whistle”, is a whistled version of Spanish used by inhabitants of La Gomera in the Canary Islands. It can reach up to 5km across the ravines and mountains of the island. In the 1940s and ’50s, it was the standard way to alert the Guardia Civil about a wildfire. Its subsequent decline was arrested by an initiative to make it a compulsory subject at primary school in the 1990s. In 2009, Silbo Gomero was declared a Masterpiece of the Oral and Intangible Heritage of Humanity by Unesco and was the subject of Written in the Wind, an award-winning documentary.

That film caught the attention of the filmmaker Corneliu Porumboiu.

“I saw it on French television,” says the Romanian writer-director. “That was in 2009. And I started getting interested in the subject. But it took some time to find some books and more information about it. At the beginning it was a project I was working on between other projects. After my last film I started to really focus on the whistling. And I got in touch with the head of the whistling department of language in La Gomera. Because they teach it in school now. So there was all this process before the writing.”

I thought I could play with genres. We watched the classic noirs. Double Indemnity. The Big Sleep

The Gomeran whistle is a major plot device in Porumboiu’s The Whistlers, a sleek, deadpan neo-noir. With a nod to the director’s 2009 hit, Police, Adjective, the film concerns a corrupt cop named Cristi (Vlad Ivanov) who infiltrates a criminal group, only to fall for Gilda (Catrinel Menghia), the girlfriend of the mob muscle Zsolt (Sabin Tambrea).

Leading man Ivanov had played the draconian police chief in Police, Adjective, which won both the Un Certain Regard jury prize and the Critics’ Prize at Cannes. When challenged by a younger, idealistic cop (Dragos Bucur), who is reluctant to jail a teenager caught smoking dope, Ivanov’s chief forces him to read out the dictionary definition of “police”.

“I had the idea of using that character because in the last film he was someone who trusted the system and was part of it,” says Porumboiu. “The character in Police, Adjective had a certain way of thinking. What if we find this guy 10 years later on and he’s completely lost? He doesn’t know what he believes anymore.”

The Whistlers is a departure in every sense for Porumboiu. It’s his first film set outside his native Romania, and his first foray into genre, albeit with characteristically droll flourishes and whistling criminals. In addition to the slinky femme fatale, her intimidating beau, a big boss (Agustí Villaronga), and two mattresses stuffed full of hundred-euro bills, there are eye-catching formal beats. Some 20 minutes in and there are more edits and shots than might be found in all of the director’s other films. Even Porumboiu was surprised to find himself making a film that features flashbacks.

“The film was much bigger than anything I’ve done before,” he says. “It was a much bigger production. With my previous films, most of the focus is on acting. So it’s about understanding actors and rehearsing a lot on the set. Here was another type of work. Many of the films I made are from real life. This is more stylised. Being a film about language and codes, I thought I could play with genres. We watched the classic noirs. Double Indemnity. The Big Sleep. Those kinds of films. I had the idea that in a noir the characters are always playing characters in order to trick others. So I wanted to use that.”

Corneliu Porumboiu emerged alongside Cristi Puiu, Cristian Mungiu, Radu Muntean and Tudor Giurgiu as a major figure in the Romanian New Wave shortly after the turn of the millennium.

“It wasn’t a wave in terms of the classical sense,” says Porumboiu. “Nothing was written down. But for me it was important because I was a student at that time. I think each director had his own world and developed his own style. And with each of those directors, as time goes by, you can see the personal journey they are on.”

The movement, whether codified or not, came to dominate Cannes and Berlin – as well as cinema-themed chatter – for more than a decade, hoovering up a staggering number of awards. Cristi Puiu’s Cigarettes and Coffee won the Short Film Golden Bear at the Berlin International Film Festival and Catalin Mitulescu’s Trafic which won the Short Film Palme d’Or at Cannes in 2004. Cristi Puiu’s The Death of Mr Lazarescu won Un Certain Regard at Cannes in 2005. Dorotheea Petre was named best actress at Un Certain Regard for The Way I Spent the End of the World, while Porumboiu took home the Camera d’Or at Cannes for 12:08 East of Bucharest in 2006. Cristian Nemescu’s California Dreamin’ won Un Certain Regard in 2007.

Porumboiu would win again at Cannes with Police, Adjective (2008) and The Treasure (2015).

“Cannes has been very important for me,” says Porumboiu. “I’ve been lucky to be there with so many films. It’s important for me, being Romanian, coming from a small culture. You know, it is difficult to be seen. Cannes helps to introduce these films to a wider world.”

Unlike his fellow nationals Cristi Puiu, who came from painting, and Cristian Mungiu (4 Months, 3 Weeks and 2 Days), who came from journalism, the Vaslui-born Porumboiu was not particularly interested in the arts before he enrolled at the faculty of management at ASE University Bucharest in 1994.

“I came to cinema quite late,” he says. “I was 19 years old and I was studying management in Bucharest before I started going to the cinema. And then I saw La Dolce Vita. And that was the film that made me want to get involved in cinema.”

The Romanian New Wave has to date been characterised by a minimal, realist aesthetic undercut with a flair for absurdity. A gallows humour pertains whether the films are, like Tales from the Golden Age, set in the final years of Nicolae Ceausescu’s totalitarian rule, or against the free market capitalism that has subsequently defined Romania (see California Dreamin’ or Tuesday, After Christmas).

Porumboiu’s darkly ridiculous and wryly observed engagements with the minutiae and peculiarities of Romanian life include 12:08 East of Bucharest (2006) in which a talk show host, a drunk and a Santa Claus impersonator debate whether the Romanian revolution of 1989 really happened in the director’s hometown.

The Second Game (2014) sees the filmmaker sit down with his referee father Adrian to revisit a 1988 derby match between FC Dinamo, the footballing wing of Romania’s Internal Affairs Ministry, and FC Steaua, the team managed by the Romanian Army. By half-time, there’s plenty of blood but Porumboiu snr, who was presiding over the fixture, has done nothing to, as it puts it, interfere with “the flow of the game”. A bit like Gogglebox with a loaded political subtext, it’s a simple yet audacious piece of cinema.

“I saw five minutes of that game on TV and it was something from my past that I had forgotten,” says Porumboiu. “So that was where the first impulse came from. I think there’s a lot of humour in it. And it was interesting because you don’t like to repeat yourself; you want to try new things.”

He has subsequently returned to the beautiful game with Infinite Football (2018), a documentary portrait of former Romanian footballer Laurentiu Ginghina and his big plans to overhaul the international game with a quasi-octagonal pitch and players confined within their own half.

But, with the exception of The Whistlers, even his dramatic features betray a documentary bent. 2015’s caper The Treasure began as a nonfiction project concerning its star, the Romanian filmmaker Adrian Purcarescu, and his attempts to find valuables believed to have been hidden by his grandfather on the grounds of a family estate. The metal detector he hires, played by Corneliu Cozmei, is a real-life professional metal detector. Casting, especially casting non-professional actors, is a big part of the director’s process.

“I spend a lot of time on casting,” he says. “It was the same for The Whistlers. The thing about casting is that it’s the moment you can see if the text is working and you can play with what you have. You can use it as a rehearsal. It’s the best possible preparation.”