Brian Dennehy obituary: A giant of American theatre who stayed loyal to his Irish heritage

On screen, tireless actor ranged from Rambo to Romeo + Juliet, with plenty of trips to old country 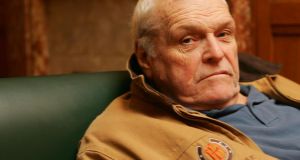 Brian Dennehy in Dublin while he appeared in The Field, in 2011. Photograph: Bryan O’Brien

Brian Dennehy, who has died in Connecticut at 81, stayed loyal to his Irish heritage without admitting sentimentality or cheap romanticism.

Speaking to this newspaper in 2011, as he prepared to play the Bull McCabe in John B Keane’s immortal The Field, the tireless performer – a “character actor” on film, a towering lead on the stage – explained how his grandfather, who emigrated in the 1890s, “hated being reminded of Ireland and hated everything Irish”. His dad swung in the other direction, and Brian seemed to strike a happy balance. “My own father, he became a typical Irish-American, a typical sentimentalist,” he said. “Me, third generation, I fell in love with Ireland when I first visited, but I am no idealist; I know the good and the bad points – the joy and the craziness.”

Throughout a busy career that surged in middle age, Dennehy returned often to the old country. He brought his renowned performance in Eugene O’Neill’s The Iceman Cometh to the Abbey Theatre in 1992 and purchased a cottage on the Beara Peninsula, in west Co Cork, shortly afterwards. On a Late Late Show appearance in 2011 he talked about his family’s origins in that county.

Dennehy became such a familiar presence on film – sometimes warm, sometimes aggressive, always charismatic – it is hard to imagine how the medium had existed without him. He squared up against Sylvester Stallone in the first Rambo film. He was a memorable Montague, father to Leonardo DiCaprio, in Baz Luhrmann’s Romeo + Juliet.

By the end of the 1970s Brian Dennehy had become an immovable piece of the Hollywood furniture. Always there to add presence. Always available to quietly dominate

Many critics regard his role as the anguished protagonist of Peter Greenaway’s The Belly of an Architect as the finest of his screen career. Reviewing the film on release in 1987, Janet Maslin of the New York Times said he brought “a robust physicality… without missing the essentially cerebral nature of the role; this is one of the best things he has done.”

Meanwhile, that combination of the cerebral and the physical helped him become the most acclaimed interpreter of Eugene O’Neill on the contemporary American stage. “O’Neill was Irish-American, remember, not Irish,” he told Sara Keating in that 2011 interview. “And that’s a whole lot different.”

Brian Manion Dennehy was born in Bridgeport, Connecticut, and raised in Long Island, New York. His father, Edward Dennehy, was a wire-service editor for the Associated Press. He secured a place at Columbia University on a football scholarship, but his real priority was acting with the Columbia Players. Years later he revealed that the dramatic society looked down on sportsmen and refused to entertain his advances. “We’re not interested, my dear boy. Not interested,” he remembered them saying. “When you come back with your black turtleneck and your beret, we will consider you at that point.”

He dropped out and served in the marines before returning to complete his degree in 1965. Now married with a young family, Dennehy worked as a cab driver, trucker, butcher and, ultimately, stockbroker to keep the lights on, but, active in community theatre, he continued to sustain acting ambitions.

He eventually lunged for New York, and by 1976 he was appearing in Chekhov for the admired Impossible Ragtime Theater company. That performance caught the eye of an agent, and Dennehy secured a role opposite Burt Reynolds in Michael Ritchie’s American football comedy Semi-Tough.

One day you are hamming it up for the popcorn crowd, the next you are winning Tony awards for performances in the work of Eugene O’Neill and Arthur Miller

The cliche “He never looked back” is for once appropriate. Hollywood loves slim young Adonises. But the industry also finds endless space for blocky character actors such as Charles Durning or Ned Beatty (both of whom were also Irish-American). In 1977 Dennehy appeared in 14 TV series and films: Kojak, Mash, Police Woman, Lou Grant; that performance in Semi-Tough. By the end of the decade he had become an immovable piece of the Hollywood furniture. Always there to add presence. Always available to quietly dominate. “The only thing I do well is loom large. I do that better than anybody,” he said modestly.

His performance as the sheriff who runs up against John Rambo in Ted Kotcheff’s First Blood pushed him to another level. It is a standout role in a film that has a very different tone – grittier, more ambiguous – than the increasingly jingoistic sequels that followed. Dennehy offers a frightening and plausible embodiment of mid-level establishment intolerance. He could be a friendly presence. But he could also be properly frightening.

He had a significant part in Ron Howard’s lovely science-fiction fantasy Cocoon and an amusing one as Chris Farley’s dad in the hugely successful, unashamedly low-brow Tommy Boy from 1995. That is how such careers function. One day you are hamming it up for the popcorn crowd, the next you are winning Tony awards for performances in the work of Eugene O’Neill and Arthur Miller.

He took those prestigious prizes for two of the standout parts in American theatre: as Willy Loman in Miller’s Death of a Salesman and as James Tyrone snr in O’Neill’s Long Day’s Journey Into Night. On those roles alone he secured a place as a giant of American theatre.

Few other contemporaries so effectively combined delicacy with domination. “What this actor goes for is close to an everyman quality, with a grand emotional expansiveness that matches his monumental physique,” Ben Brantley wrote in the New York Times of his Willy Loman, in 1999. “Yet these emotions ring so unerringly true that Mr Dennehy seems to kidnap you by force, trapping you inside Willy’s psyche.”

One joy of being a more robust sort of actor is that the parts are less likely to dry up when the hair turns grey. Dennehy was in demand deep into his later years. He had a regular role on the continuing TV series The Blacklist. His performance in Barry Alexander Brown’s civil-rights drama Son of the South will emerge posthumously. “I don’t look like an actor,” he said when asked to explain the length of his career. “I don’t sound like an actor, I’m just another person. Which really is the whole point of acting, is trying to be just another person.”

Brian Dennehy was twice married. He is survived by Jennifer Arnott, his second wife, and by his five children.

Billy Hutchinson: ‘I justify everything I did in the Troubles. To stay sane, I have to’
Real news has value SUBSCRIBE