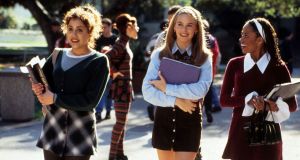 The verbal sparring comes thick and fast in this occasionally improvised, pitch perfect screwball comedy in which Cary Grant workaholic editor attempts to win back his star reporter and ex-wife, Hildy (Rosalind Russell). Russell won the role after Ginger Rogers, Katherine Hepburn and Claudette Colbert said no. View on archive.org

A mentally unstable young woman (Aubrey Plaza) becomes obsessed with a social media influencer (Elizabeth Olsen) and reinvents herself in this delicious, squirm-making satire. O’Shea Jackson Jr and Wyatt Russell are the boyfriends in the background. View on Netflix

It’s a little late for Easter but it’s never too late to watch Monty Python’s good-natured religious satire in which Very Naughty Boy Graham Chapman is mistaken for his next-door neighbour (with the exact same birthday), Jesus Christ. View on Netflix

Men-children Will Ferrell and John C Reilly are forced to live together as brothers after their single parents, Richard Jenkins and Mary Steenburgen get married. They bond, they make space for more activities, and fall out again before a ludicrous performance of Por Ti Volaré. View on Netflix

Determined to make a socially conscious drama, Hollywood’s top director of comedies, played by Joel McCrea, dresses as a hobo and sets out “to find out what it’s like to be poor and needy”. Veronica Lake, sometimes dressed as a boy, is his wise-cracking travelling companion. View on iTunes and Google Play

The team behind South Park take aim at racial stereotypes, Liberal Hollywood, former North Korean dictator Kim Jong-il, and US imperialism in this riotous Supermarionation-style puppet show. Featuring sex and a lot of vomit. View on iTunes and Google Play

Another Cary Grant remarriage comedy, in which socialite Tracy Lord (Katharine Hepburn) must pick between her heavy drinking ex-husband (Grant), her nouveau riche fiancé (John Howard), and a reporter looking for an inside scoop (James Stewart). Shenanigans ensue. View on iTunes and Google Play

In 1977, the titular Harry asserts that men and women cannot be friends as “the sex part gets in the way”. Thus, Billy Crystal and Meg Ryan end up in a will-they-won’t-they rom-com holding pattern for more than a decade, as Nora Ephron’s sparkling script introduces such now familiar concepts as “high maintenance”. View on Netflix