Ema: A heady fusion of dance and sexual coupling

Film review: Pablo Larraín’s incendiary tale of grief and healing moves to its own rhythm 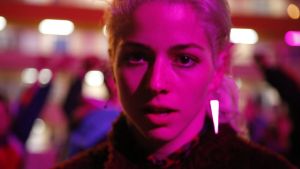 It’s still dark in Valparaíso and a traffic light burns. Pyromaniac dancer Ema stands back and admires her handiwork. This arresting visual is the perfect opening gambit for Pablo Larraín’s incendiary eighth feature. The Chilean auteur typically divides his time between the sweeping spectacle of films such as Jackie and the demented rantings of The Club and Tony Manero. Ema marries the best of both Larraínian tendencies.

A carnal telenovela in which the lines between dance, sex, and fire-starting are blurred, Ema stars Mariana Di Girolamo as a grieving mother looking for solace in what looks like all the wrong places. A dancer and a fire-starter, this imperfect, compelling heroine has split from her choreographer husband Gastón (Gael García Bernal).

Between heated exchanges, we piece together the grisly details. The couple have returned their troubled, adopted son, Polo, to the orphanage. The seven-year-old tried to burn down the house, set his aunt ablaze, and shut the cat in the freezer, but Ema is desperate to get him back.

She and the exasperated Gastón continue to work together as she builds a messy life away from him, a life of many sexual partners and, much to her ex-husband’s dismay, Reggaeton. (Within the film’s wild world Reggaeton is synonymous with lesbianism.) Many writhing montages later and Ema’s elaborate – and melodramatic – plan becomes apparent. And it’s a doozy.

It’s tricky to tell how much of Guillermo Calderón and Alejandro Moreno’s script survives in the heady fusion of dance and sexual coupling onscreen. In common with Gaspar Noé’s Climax, Larraín marries dance and cinema to create an innovative grammar, shaking and twerking to its own dembow.

For Ema, all healing is sexual, which is the kind of thinking that would undoubtedly lead to a terrible downfall in a Hollywood picture. There are no such rules here. There is only defiance, a boldness that courses through every fibre of Di Girolamo’s being, through every stunning composition by Sergio Armstrong, and through Nicolás Jaar’s electrifying score.

There’s no one and no film quite like Ema.

Free premiere on the Mubi platform for 24 hours on May 1st. Mubi.com