We Summon the Darkness: Cheap and cheerful heavy metal horror

Review: This old-school chiller is a joyous – if nasty – celebration of the female rock fan 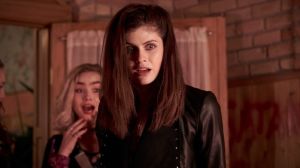 Film Title: We Summon the Darkness

In this strange time, when $100-million blockbusters are going straight to streaming services, it’s reassuring to encounter a film that feels like a straight-to-video release of the old school. That is not to diss We Summon the Darkness. Loose and funky with a strain of pop feminism, Marc Meyers’s follow-up to My Friend Dahmer reminds us of those VHS releases that grew into minor cults. Watch and chortle before voting for Michael Dukakis.

The film is, indeed, set in 1988. Three young women are driving toward a heavy metal gig in a time of unease. A demonic killer is slicing up their contemporaries as a tele-evangelist (Johnny Knoxville, no less) prophesises doom for the cursed nation. Along the way, they rub up against three lads – also followers of the mighty riff – who fail to endear themselves by throwing a milkshake at the girls’ windshield.

Meyers and his cast are tuned into the chumminess that makes metal fans such agreeable company (the same can be said of horror buffs). References to bands are traded in a believable badinage until one of the guys is found to have a switchblade in his pocket.

We Summon the Darkness - official trailer

We then reach an awkward chicane. The trailer chooses to reveal The Big Thing that happens, but we will shroud TBT in forgiving vagueness. Suffice to say (you knew this anyway) the violence heightens and the girls get to show they ain’t made of sugar and spice.

The setup triggers inevitable reminders of Jeremy Saulnier’s Green Room. We Summon the Darkness cannot rival that film for tension or wit, but it has a ramshackle enthusiasm that keeps interest alive even as the last act descends into unnecessarily murky confusion. The dialogue is just about sharp enough to justify some early periods of inactivity. A few beakers (if not quite buckets) of blood are spilled to satisfy the gorehound demographic.

What really sets We Summon the Darkness apart, however, is its joyous – if nasty – celebration of the female rock fan at a crucial point in her development. Alexandra Daddario, Maddie Hasson and Amy Forsyth know how to make a gang from convincingly distinct individuals.

A complaint? Nobody can now use the title for a horror flick in which devil worshippers call a certain Lowestoft-based metal band into their bloody pentangle. Maybe in another five years or so.

Available to stream from April 20th

‘Jennifer Aniston cried in my lap’: the inside story of Friends
Real news has value SUBSCRIBE