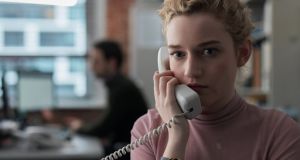 In The Assistant there is a pervasive sense of dread as Julia Garner’s Jane, a new employee working for a bullying boss, quietly suffers through another intimidating day at the office

Starting in autumn of 2017, a series of stories exposed Harvey Weinstein’s sexual harassment and abuse of dozens of women over four decades. These in turn inspired the viral spread of the #MeToo hashtag on social media.

Some 2½ years on and the social justice movement has its own terrifying new movie.  There are no jump scares or acts of sexual violence in The Assistant. There is, however, a pervasive sense of dread as Julia Garner’s Jane, a new employee working for a bullying, abusive boss, quietly suffers through another intimidating day at the office.

Ever since Kitty Green’s film premiered to rave notices at the 2019 Telluride Film Festival, it has been unofficially dubbed “the Harvey Weinstein movie”. The writer-director has mixed feelings on the matter.

“It’s complicated,” says Green. “I try to avoid being associated with the Weinstein label, but, of course, you can’t escape it. It’s reductive to say that the film is only about Harvey Weinstein. It’s about broader issues.

“It’s about unconscious bias and microaggressions. This is essentially a period piece because it takes place before the #MeToo movement when there was no space to talk about misconduct. The biggest problem I have when people say ‘oh, it’s about Harvey Weinstein’ is that then they can go home and say ‘oh, that doesn’t happen in my workplace’. When in fact this happens in every kind of workplace.

“That was my problem with a lot of the coverage of the #MeToo movement. The idea that if we get rid of that Harvey Weinstein everything will be fixed. Well, after 10 years working in the film industry and on the film festival circuit, I know the everyday behaviours that hurt and sideline women.”

Functioning as an unintentional riposte to John Lithgow’s thrillingly ghastly portrayal of Fox News chief executive Roger Ailes in Jay Roach’s Bombshell, The Assistant reduces the boss to an off-screen presence as the young woman of the title (with a conscious nod to Jeanne Dielman, 23 Commerce Quay, 1080 Brussels), attends to croissant crumbs and unwanted intrusions. Jane’s employer snarls and shouts down the phone, often indecipherably. Aspiring young women arrive for “meetings” to which the viewer is never privy.

“Originally, and from the very beginning, I didn’t want to make a film about the bad boss,” says Green. “Bad men get enough screen time. And I wanted to make the narrative about women, specifically the youngest woman on the desk, someone who had no power.

“But I also needed to show how the boss wields this power over the company, and how corrosive it was. Initially, the phone calls weren’t even scripted. I just had ‘yells’ written in the script. But it felt weird to hear what was not going on on the phone at the other end. So we put the phone calls in during post-production and hired an actor to sound terrifying.”

In the film’s most discombobulating scene, Jane raises her concerns with a senior figure in the company, only for him to chillingly dismiss her with a suggestion that she is both jealous and lucky. The exchange, which is brilliantly performed by Julia Garner and Matthew Macfadyen, doubles as a masterclass in gaslighting.

“I’ve spoken to a lot of people who worked in HR and how they represent the company and not the employees,” says Green. “And I’m lucky to have Julia, who can do so much with her face and eyes. And Matthew, who was so calm. That’s the point. It’s so insidious. We know the things that have been reported, that happen behind closed doors. But I wanted to look at the machinery around that, and the culture of silence and the toxic work environment.”

Green’s carefully constructed debut documentary feature Ukraine Is Not a Brothel, probed FEMEN, the Ukrainian feminist activists who, during a 14-month shoot, were clearly under the thumb of abusive ex-convict Viktor Sviatsky. After making its premiere at the Venice Film Festival in 2013, the film screened at more than 50 festivals internationally, and won the Australian Academy of Cinema and Television Arts Award for Best Documentary. The director’s follow-up project, The Face of Ukraine: Casting Oksana Baiul, won the Short Film Jury Prize for nonfiction at the Sundance Film Festival.

Her much-lauded second feature, Casting JonBenet, was acquired as a Netflix Original and screened at Berlinale 2017. Revisiting the unsolved 1996 killing of six-year-old JonBenét Ramsey, this fascinating and unsettling documentary explored the case through the audition tapes of hundreds of local actors in Boulder, Colorado, where the murder took place.

“Americans love to talk,” Green told The Irish Times in 2017. “That’s something I found out quickly. As soon as you put them in front of a camera they know what to do. I expected it to be a much longer process. But it was really quite organic. I’d ask about the case and immediately they got personal. They immediately connected it to their own lives. They immediately had ideas about who done it.”

All walks of life

The Assistant is Green’s first fictional feature. She employed the same scholarly, interview-based process she has brought to her non-fiction work. Some of the women surveyed had, in fact, worked for Miramax and The Weinstein Company. Others hailed from all walks of life. The production also partnered with the New York Women’s Foundation and other women-led organisations dedicated to making workplaces fair and equitable.

“I did about 100 interviews,” she says. “I started with the film industry. I expanded out to agencies and studios, and then I went to women and finance and tech and other industries. It was shocking how similar the stories were. I was hearing the same kind of stories again and again about unfair treatment and the gender division of labour.

“It was really depressing to be honest because I met a lot of people who didn’t feel there was a path forward for them in their careers. They just quit and left and moved into other jobs or other industries. It was shocking how common that was.

“And it was interesting how many stories were relatable or transferable to anyone who’s ever worked in an office. I tried to focus on those rather than the crazy stories about helicopters and private jets. I wanted to find something that anyone could identify with.”

Did she ever consider configuring the material into a documentary?

“If it was a documentary it would have been just people listing bad things that had happened to them,” says the writer-director. “I wanted to put people in the shoes of someone who’s in a powerless position. To think about all the glances and gestures that really affect a young person’s confidence. Those things can really mess somebody up.

“There are things that I’ve experienced in the film industry, and when you mention it to friends they say oh, ignore it, or whatever.’ And it really hurts when people doubt you or dismiss you. So I wanted to make sure the audience was stuck in her shoes for the duration of the movie.”

As The Assistant opens the main character has overnighted at the office in order to keep on top of her duties. It’s a state of semi-servitude that speaks to the more general awful working conditions that are frequently imposed on interns and entry-level employees.

“A lot of men have come up to me after screenings to say they see themselves in the character or that they’ve had female bosses who are bullies,” says Green. “It’s not clear cut along gender lines. But this is specifically something that women do face as women get a lot more of it.

“There are men who have worked in these entry-level positions, but very often women get stuck in these positions for longer and have to put up with this behaviour for longer.”

Back in 2017, Green described how a lack of opportunities had pushed her into the documentary sector. Does the very existence of The Assistant suggest that the post-#MeToo industry has more space for women?

“That might be a question if I’ve made like a Marvel movie or something,” laughs Green. “I’m still on the path towards making a proper film, but I’ve seen some of my filmmaking friends getting opportunities they didn’t have before. I think the conversation is helping. I’m even starting believe that women can make movies too.”

The Assistant is available on demand from May 1st