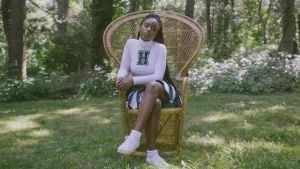 Selah (Lovie Simone) runs the Spades, suppliers of drug and alcohol across the campus, with an iron hand.

Film Title: Selah and the Spades

After it premiered to no little fanfare at Sundance last year, Amazon Studios scooped Tayarisha Poe’s excellent debut feature for distribution and further development of an original series based on the same story.

The film opens, as so many high school movies before, with an overview of the various factions at an exclusive boarding school.

Alongside right-hand man Maxxie (Moonlight’s Jharrel Jerome), Selah (Greenleaf’s Lovie Simone) runs the Spades, suppliers of drug and alcohol across the campus, with an iron hand.

Charming, charismatic, and not above ordering violence against those who would cross her, Selah, who is in her senior year, is desperate to find an heir. Enter Paloma (newcomer Celeste O’Connor), a scholarship student who develops a deep bond with Selah, one, to use her phrasing, that leaves one wondering if she is in love with Selah or if she wants to be Selah.

The efficient and loyal Paloma seems like the ideal candidate to take over the Spades, but the group’s enemies are circling. Worse still is Selah’s inability to be second best. Brief glimpses of her home life – “What happened to those three points?” asks her mother, upon learning of a 97 per cent result in a trigonometry test – hint at the causes of Selah’s self-sabotaging desire for perfection.

There’s something of the dreamy realism of Sean Baker’s The Florida Project or Desiree Akhavan’s The Miseducation of Cameron Post here. ASKA’s atmospheric score and Jomo Fray’s trippy visuals create a strange sense of unease, reflecting the adolescent anxiety that powers the drama along. This isn’t 1990s teen angst, it’s Gen Y stress.

And boy, is it stressful. On the surface, Selah is calm, collected and capable of making a very convincing speech about cheerleading as empowerment. What lies beneath is very different, a contradiction captured in Lovie Simone’s note perfect performance. Newcomer Celeste O’Connor, who will soon be seen in Ghostbusters Afterlife, is simply outstanding as Paloma.