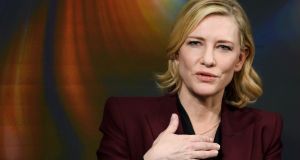 Cate Blanchett has addressed sex abuse allegations against Woody Allen made by his daughter Dylan Farrow, claiming she knew nothing of them when they worked together.

The actor won a best actress Oscar for her part in the film-maker’s 2013 comedy drama Blue Jasmine.

In a new interview with CNN’s Christiane Amanpour, asked Blanchett how she could juxtapose being a #MeToo supporter with staying silent about working with Allen.

“I don’t think I’ve stayed silent at all,” Blanchett said. “At the time that I worked with Woody Allen, I knew nothing of the allegations. At the time, I said it’s a very painful and complicated situation for the family, which I hope they have the ability to resolve.”

Dylan Farrow has accused him of molesting her when she was a child, a claim consistently denied by Allen.

Cate Blanchett on the Woody Allen case: "If these allegations need to be re examined, that in my understanding they've been through court, then I'm wholeheartedly in the support of that. Social media's fantastic about raising awareness about issues but it's not the judge in jury" pic.twitter.com/18tn7UnQg0

Blanchett also talked about the importance of the justice system.

“If these allegations need to be re-examined which, in my understanding, they’ve been through court, then I’m a big believer in the justice system and setting legal precedents,” she said. “If the case needs to be reopened, I am absolutely, wholeheartedly in support of that.”

She also said social media – where the #MeToo hashtag took hold – shouldn’t be seen as the “judge and jury”. “I feel that these things need to go into court, so if these abuses have happened, the person is prosecuted and so someone who is not in the shiny industry that I am can use that legal precedent to protect themselves,” she said. “Always, in my industry or any other industry, they’re preyed upon because they’re vulnerable.”

Blanchett is the latest actor to address Allen’s alleged abuse of his daughter, following on from Mira Sorvino, Marion Cotillard, Greta Gerwig, Colin Firth, Michael Caine and Ellen Page. His next film, titled A Rainy Day in New York, is currently awaiting release while its stars, Rebecca Hall and Timothée Chalamet , have announced that they will donate their salaries from the film to charities.

After Farrow re-stated her allegations of abuse in January, Allen said several investigations cleared him of any wrongdoing.

“When this claim was first made more than 25 years ago, it was thoroughly investigated by both the Child Sexual Abuse Clinic of the Yale-New Haven Hospital and New York State Child Welfare. They both did so for many months and independently concluded that no molestation had ever taken place. Instead, they found it likely a vulnerable child had been coached to tell the story by her angry mother during a contentious breakup. Dylan’s older brother Moses has said that he witnessed their mother doing exactly that – relentlessly coaching Dylan, trying to drum into her that her father was a dangerous sexual predator.”

Farrow named Blanchett and other actors specifically when pointing out what was, in her view, an incongruity between defending Woody Allen while also declaring that “Time’s Up”.

Despite a state’s attorney saying there was “probable cause” to prosecute, Allen was never put on trial. – Guardian Service, agencies