The Third Murder: One of the most polarising films of the year

Review: Many are left cold by the strange marriage of brutality and wistfulness 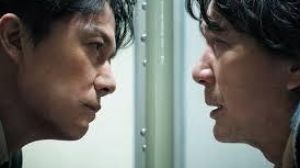 Masaharu Fukuyama and Koji Yakusho in “The Third Murder”.

An enigmatic tangle of anti-death penalty campaigning, murder-mystery, and legal procedure, the 12th feature from prolific Japanese director, Kore-eda Hirokazu, is a departure from the tenderly observed family dramas (Like Father, Like Son; Our Little Sister; After the Storm) that have made him a perennial favourite at the Cannes Film Festival.

Shigemori (Fukuyama Masaharu), a rather jaded state defender, is assigned an apparently open-and-shut case. Misumi (Koji Yakusho) who has already spent 30 years in prison for a murder committed in the 1980s, has allegedly killed his factory-owner boss, burned the corpse and stolen the victim’s wallet.

Shigemori is tasked with pleading the court down from the death penalty to a life sentence, but the lawyer soon realises there is more to the case than meets the eye.

There is no material evidence linking the accused with the crime, beyond Misumi’s own confession. His vague account is inconsistent with the crime scene and, more confusingly, varies wildly from one telling to another. He even sells a story to a supermarket tabloid claiming that the victim’s wife had offered to pay out from her husband’s life insurance. The victim’s mysterious teenage daughter (Suzu Hirose) adds to the confusion.

What is going on here? Are these fanciful embellishments and contradictions symptoms of a broader psychosis? Or might he be covering for someone?

The Third Murder has, unexpectedly, become one of the most polarising films of the year. Many critics have not warmed to the film’s strange marriage of brutality and Kore-eda’s wistful milieu.

Look closer, and despite the curveball content, the film teases out relationships just as carefully and patiently as the director’s earlier, gentler films. It’s killing as Yasujiro Ozu or Mikio Naruse might have had it.

Detailed conversations about the Japanese legal system and capital punishment – rather conveniently, Shigemori’s father is the retired judge who heard Misumi’s original case decades ago – are genuinely fascinating.

The slow-burning and sometimes surreal interrogation room interviews and the director’s canny use of doubles, reflections, red-herrings, and Rashomon-effect makes for a nervy, if softly-spoken courtroom drama.

A jagged turn by veteran actor Koji Yakusho (Tampopo, Shall We Dance?) keeps the viewer and Masaharu Fukuyama (a most effective foil) guessing until the final credits.