Unsane: A mental-health movie with a split personality 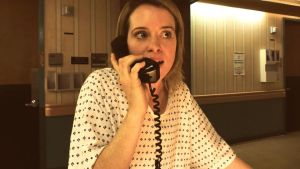 The current move to shoot feature films on smartphones (one brand in particular) springs largely from a willingness to explore the possibilities of a technology that, though present in most first-world pockets, remains largely under-exploited by users.

The early pioneers of cinema would be surprised to learn that, when everybody got a high-end movie camera, most would use it for little more than filming the cat. But, as this typically egg-headed, typically frustrating shocker from Steven Soderbergh clarifies, there is something else going on.

Early on, we establish that Sawyer Valentini (Claire Foy), a Bostonian lawyer, lives her life on Tinder and FaceTime. When an online hook-up becomes physical, she urges the man never to contact her again. That’s enough real life for her.

The dramatic contrasts and cold edges of the iPhone video are how many of us view much of the world. Movies made with that technology are closer to contemporary reality than any celluloid could manage.

Sawyer is a special case. She became more than usually shut off after a nasty experience with a stalker. Now relocated to Pennsylvania, she imagines the creep staring from various murky corners of various urban shells.

A sensible, if nervy, sort, Sawyer makes an appointment with a psychiatrist. The doctor is sympathetic. She asks her patient to sign a few routine forms. Then the weirdness really begins. Sawyer finds herself confined to a mental institution and, suddenly aware that she was tricked into admitting herself, can see no way of escape for at least the agreed seven days.

This is by far the better half of a film that (perhaps appropriately) displays a distinct split personality.

Over the last few years, the word “gaslight” – derived from the Patrick Hamilton play of that name – has been increasingly misused to mean blatant deceit (“Donald Trump is gaslighting us again”). This is what Hamilton really meant: the doctors question Sawyer’s perceptions to persuade her of her own mental instability. Her initial theory is that such establishments are deliberately incarcerating the sane to siphon funds from insurance companies.

This is the sort of furiously frustrating “wrong person” story with which Hitchcock had so much fun. Combining that director’s taste for creative paranoia with the exploitation aesthetic of contemporary horror merchants such as Blumhouse, Soderbergh works a suffocating knot around Sawyer. She makes a friend. But can she trust him? She smells escape. But we suspect a dead end.

Some of the solutions are overly pat. Others make no sense whatsoever, even when allowances are made for the looming Gothic universe

Juno Temple, never less than arresting, is excellent as a hyperactive inmate straight out of Sam Fuller’s Shock Corridor. Foy manages to combine a stubborn flintiness with a scattered intelligence, even as her American accent wavers uncertainly from state to state. The sickly nature of the iPhone footage adds to the unease.

During the opening half, we are fed inevitable suggestions that Sawyer may, perhaps, be less sane than we initially believed her to be. The ambiguity is part of the appeal.

Unfortunately, Soderbergh ends by gathering such questions into a loosely bound package whose wrapping fails to cover too many awkward angles. Some of the solutions are overly pat. Others make no sense whatsoever, even when allowances are made for the looming Gothic universe. (No joke. The end is less William Castle, more Castle of Otranto.)

We wouldn’t want to scare Soderbergh back to the unconvincing retirement he abandoned a year or so ago. His unquenchable taste for experiment is to be celebrated. But, like too many of his looser films, Unsane – which he again edits and shoots under pseudonyms – could have profited from a bit more polishing. The film about the false imprisonment is terrific. The other film is really not very good at all.

That will have to do for now.