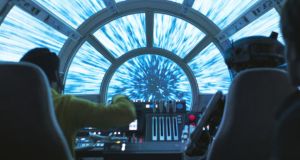 The reviews for Solo: A Star Wars Story are far more unpredictable than the mostly sickened notices for The House That Jack Built. “Dull and dutiful,” says Rolling Stone. “A curiously low-stakes blockbuster, in effect a filmed Wikipedia page,” says the New York Times. “A movie so un-fun you should get college credit for watching it,” according to the New York Post. Reviewers were more impressed at NPR (“fan service doesn’t get more serviceable”), the Guardian (“Boisterous bromance”) and the Minneapolis Star Tribune (“clever, light entertainment that shoots ahead as if it was launched from an intergalactic slingshot”). At the time of writing Solo has a 72 per cent approval rating on Rotten Tomatoes. That’s not terrible, but it is lower than any of the newer franchise entries, including the fan-derided Star Wars: The Last Jedi (which had a 91 per cent approval despite the flying princess and book-burning Yoda).

Tuesday was all about Solo: A Star Wars Story. As the European premiere of the only Hollywood blockbuster at this year’s bash came down, fireworks blasted across the Croisette. Earlier Chewbacca posed at the strange white box that anchors the photocall. Everyone is here for chats with organs such as The Irish Times: Alden Ehrenreich, Emilia Clarke, Donald Glover, Thandie Newton, Phoebe Waller-Bridge. Mysteriously, the Finnish actor Joonas Suotamo, who has taken over playing Chewbacca from the retiring Peter Mayhew, appeared in the cast photo while another actor occupied the suit. Wookie-watchers might like to make note of a very special cameo in Solo that will soon send them running to Wookieepedia.

Von Trier does a von Trier

Day two of Von Trier Watch at Cannes. For viewers just joining us: the premiere of The House That Jack Built, the Danish auteur’s idea of a serial-killer movie – featuring hectoring women victims, breast slicing, child mutilation, archive footage from concentration camps, the usual – prompted walkouts and widespread revulsion. But the real fun began when critics started tripping over themselves on the way to the vomitorium in an effort to prove themselves the most appalled reviewer. Publicists looking for quotes can choose from “an ordeal of gruesomeness” (the Guardian), “Self-reflexive torture porn” (the Daily Telegraph), “irredeemably unpleasant” (the Playlist), and, worst of all, “The film keeps pausing for lectures: on the fermenting of grapes, the architecture of cathedrals, the Stuka dive-bomber.” (Variety). There’s no such thing as bad publicity, right?

Cultural historians, semioticians and great minds everywhere have spent much of the past 24-hours analysing and debating the meaning of Kristen Stewart’s shoe removal. Was it a feminist gesture? A Marxist allegory? A nod to the legacy of 1968? “Sous les pavés, la plage! Or le tapis!” The Personal Shopper and Twilight star spoke out against the festival’s controversial red-carpet flats ban in 2016. Posing for photographs en route to the premiere of Spike Lee’s BlacKkKlansman on Monday, Stewart removed ridiculously tall heels that looked like they might have been borrowed from a circus act and dashed up the steps in her bare feet. It’s a noble gesture, but it does beg a question: why should Stewart, one of this year’s competition judges, bother with the silly black Christian Louboutin stilettos in the first place? What are they going to do? Call the shoe police? Kick out one of the planet’s most recognisable movie stars? Who, then, will visibly check out Cate Blanchett’s bottom?

While waiting for hours and hours in a queue today we got an insight into how the dress code is enforced at red-carpet screenings. A woman journalist came into a ticket for the House That Jack Built bash after her male friend was ejected for wearing the wrong sort of shoes with his dinner jacket. Our new pal was lucky to be out in something a little like a formal dress and had only to cram feet into another colleague’s smarter shoes. So, contrary to what we all wrote a few years ago, it’s not just women who fall victim to Cannes’ shoe police. It’s just that men aren’t forced to wear painful implements of bondage. Important distinction. Equality!

Spike Lee was on fire at the press conference for his well-received BlacKkKlansman, which describes efforts by Colorado police to infiltrate the Ku Klux Klan in the 1970s. The film-maker was particularly strong on the closing footage of last year’s Charlottesville conflict that closes the film. “I knew that this had to be the coda for the film, but I had to do something first,” he said. “I was given Susan Bro’s phone number. She is the mother of Heather Heyer, who got murdered when that car came crashing down the street. I was not going to put that murder scene in the film without her blessing. Mrs Bro said, ‘Spike, I give you permission to put that in.’ ” Lee went on to lambaste Donald Trump in withering language. “We have a guy in the White House – I’m not gonna say his f***ing name – who defined that moment not just for Americans but the world,” he said. “And that motherf***er did not denounce the motherf***ing Klan, the alt-right and those Nazi motherf***ers. It was a defining moment, and he could have said to the world, not just the United States, that we were better than that.”

Euphoria
★★★
Directed by Valeria Golino. Starring Riccardo Scamarcio, Valerio Mastandrea. Un Certain Regard, 115 min
The Italian multitasker Valeria Golino came to international prominence as the exotic star of the Hollywood films Rain Man, Big Top Pee-wee and Hot Shots! She released several albums and became one of only three people to have twice won the best-actress award at Venice Film Festival, before reinventing herself as an award-winning film-maker.

Honey, her debut feature film, won a commendation from the Cannes ecumenical jury in 2013 and many gongs besides. Euphoria, her sophomore bow, is one of 14 films in contention for this year’s Queer Palm. Anchored by a brilliant, maddening turn by Riccardo Scamarcio (Romanzo Criminale, John Wick Part 2), the Roman dramedy concerns Matteo, a wealthy gay playboy, and his cantankerous older brother, Ettore (Valerio Mastandrea).

For reasons that are never quite made clear or plausible, when Ettore is diagnosed with a terminal tumour Matteo decides to keep the extent of his sibling’s illness a secret. He moves his brother into his own ludicrously plush apartment, where, between tasteful objets d’art and domestics, he entertains his equally well-to-do friends. Ettore, who is now juggling a broken marriage, a mistress, a young son and cancer, is hardly a good fit.

But nothing is a very good fit here. Narratively, Ettore’s family life is ceremoniously dismissed in favour of brotherly bickering. Matteo – a keystone capitalist who brokers ill-defined deals for unseen corporations, Abu Dhabi and the Catholic Church – scans only because of Scamario’s considerable charisma. He’s always drinking, always snorting, always oblivious, always on the make. He’s so vain he gets calf implants. He discusses a refugee camp in Kenya as a branding exercise: “The future,” he says, “is the mercy business.”

For all these faults Matteo is mostly cheery company, and the froidure between the brothers eventually thaws. An impromptu trip to Medjugorje for the two very lapsed Catholics makes for surreal comedy.

Elsewhere, in what may be a compensation for the loss of Orson Welles’s The Other Side of the Wind to Netflix, or possibly the festival’s own understated way of marking the 50th anniversary of 1968, this year’s classics programme has brought out all the big guns, including Tokyo Story, a 70mm print of 2001: A Space Odyssey, The Seventh Seal, Vertigo, The Apartment and Jacques Rivette’s adaptation of Denis Diderot’s lurid 18th-century tale of convent life.

The Nun is often seen as a concession to French heritage cinema by the leading new-wave practitioner, but, in common with John Schlesinger’s contemporaneous Far From the Madding Crowd, this 1966 picture is very much a 1966 picture. It even stars Anna Karina, who is about as gloriously implausible in a habit as the late, great Margot Kidder was as Superman’s girlfriend.

It’s fascinating to rewatch Rivette’s tale of a woman enslaved by an unholy alliance of religious orthodoxy and patriarchal oppression in the era of Hulu’s Handmaid’s Tale. Karina’s unfortunate Suzanne rails against the brutality that has been visited on her by the church and by her family, only to discover that, for an 18th-century woman, the only way out is down. It’s equally fascinating to note that Alain Levent’s use of greys in his cinematography is as eye-popping as anything in the reddest Italian giallo of the era.