Brandon Cronenberg: ‘I feel like I’m playing a video game about releasing a movie’ 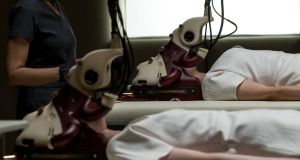 Body-swap movies generally rely on the comic potential of Jamie Lee Curtis and Lindsay Lohan’s flipped mother-daughter roles in Freaky Friday or Tom Hanks lumbering through a toy shop in Big. They can be as profound as Your Name or as freaky as Mulholland Drive but until now they’ve never been completely horrifying.

Brandon Cronenberg’s Possessor, the second film from the writer-director of the discombobulating 2012 satire Antiviral, was partly inspired by his experiences on the earlier film’s press tour. Speaking now on Zoom from Toronto, he’s careful to contextualise.

“Speaking as someone on this side of the interview I should say it’s less devious than you think,” he says. “I think it’s just that when you do a lot of interviews as you travel, there are certain questions that people ask frequently because that’s just the nature of interviews. There are certain things that people are going to be interested in. At first you try to say it differently each time you answer but at a certain point you have to try and refine your answers and give the best possible answer.

“And then you start performing a little script. Not out of disrespect but because there are only so many ways that you can say something and give an honest answer. And despite the fact that you’re being honest, you’re performing. It’s kind of like an improvisational play that you may or may not be consciously collaborating on. You’re inventing a public persona, a kind of alternate version of yourself which goes on to have its own life without you.”

That unnerving notion powers along Possessor (or Possessor Uncut as it is called for gory R-rated reasons in the United States). The now(ish)-set science fiction concerns a corporation that hijacks people’s bodies and minds to body-swap an assassin who will kill others before dying by suicide.

Andrea Riseborough stars as Tasya Vos, a star employee who, as the film opens, takes over the body of a young black woman and brings about her death at the hands of the police. A debriefing scene between Tasya and her boss (Jennifer Jason Leigh) suggests that the mission was not straightforward. There is a suggestion that she’s losing her sense of self when we see her rehearsing future interactions with her estranged husband and young son on the way home.

That process is exacerbated by her possession of Colin (Christopher Abbott), the son-in-law of Tasya’s new target (Sean Bean). The job is complicated by Colin’s willpower, Tasya’s psychological unravelling and by a shadowy corporate endgame.

Cronenberg is not convinced that weaponised, possessed humans are almost upon us. At least not in 2008 – or rather the alternate version of 2008 – when the film is set. He did read up on private military technology and mind control extensively before writing the screenplay even if the final draft is soft science fiction rather than the harder stuff.

“I’m really only using it metaphorically to talk about people. I don’t think it’s a technology that can exist in the near future or in the world that resembles the world of the film. Although I did do a bit of research into the neuroscience behind it. I think that technology – or something like it – is possible. Certainly it’s possible to control an alarming range of brain functions by electrically stimulating different areas of the brain. So it is rooted in science even if that’s not really the focus of the film.”

Possessor may be shocking and occasionally squelching but it has, unusually for a face-melting horror, picked up some of the year’s best reviews. “It is a singular work,” writes critic Chris Evangelista. “One so ghastly, so unique and so brutal that it will awe some and disgust others.” Watching the final shocking sequence, one can’t help but wonder what kind of conversations Cronenberg had with potential investors and producers.

“Once we started shooting it went surprisingly quickly and smoothly,” he says. “I don’t know if that was in part because of the long development period or in part because I was working with close friends and collaborators. Certainly there were discussions. I may or may not have had to put together a montage of children being killed on commercial television programmes as part of that discussion. But ultimately I wasn’t really pushed to give anything up. I didn’t have to censor myself or take anything out.”

Cronenberg can’t remember the first time he was on a film set. He supposes he must have been a baby. The son of Canadian director David Cronenberg and the late film editor Carolyn Zeifman, Cronenberg the Younger was initially reluctant to follow in his famous father’s footsteps.

“I went to film school in my early 20s,” he says. “I was interested in other art forms. I wanted to write. I played in bands. And at a certain point I realised I couldn’t focus on all of those things. I needed one thing. And film is a bit of a meta-art. You can write and make visual art and music.”

Cronenberg’s first feature film, Antiviral, debuted at the 2012 Cannes Film Festival in the Un Certain Regard section. An intriguing convergence of celebrity and virus, the film stars Caleb Landry Jones as a top salesman at a clinic that allows ordinary people to infect themselves with the same diseases their favourite celebrities have contracted.

Many of the notices used such phrases as “wrestling with legacy” and “like father, like son”. Certainly, when commentators use the adjective “Cronenbergian” they are typically referring to the genre-defining body horror of David Cronenberg’s Videodrome, The Fly or Dead Ringers. But the same adjective could easily apply to Brandon Cronenberg’s two sinister features. That hasn’t happened on purpose, he promises.

“From the moment I went into film I felt the only way I could do it was just to ignore all that and work from an honest place and follow my own interests and creative impulses,” he says. “And that’s what I’ve been doing. I feel like I really lack perspective on my father’s work. I have to leave that discussion to other people and I can’t keep that in mind when I’m working. That would leave me operating completely in the context of someone else’s career and that would be a fairly empty experience.”

Just to add a further layer of – here comes that adjective again – Cronenbergian upset to Possessor, the film features Jennifer Jason Leigh, who starred in dad’s 1999 biotechnological nightmare, Existenz. And then there’s the strange business of virtual release. Antiviral enjoyed a Croisette premiere with all the Cannes brand hoopla. This time around, Brandon Cronenberg finds himself boxed into a small Zoom frame on the interview circuit.

“Cannes was absolutely ludicrous,” he says, laughing. “It’s a bit like going to LA. It feels like you’re on another planet and you have to engage with it as some kind of dream – that’s a lot of fun. This is completely surreal in a different way. I can sit down at my computer and do interviews. I can see the numbers. But I’m not physically travelling with the film and I’m not able to engage with audiences and listen to the responses afterwards.

“I’m very removed. I almost feel like I’m playing a video game about releasing a movie.”

Possessor is on digital platforms from November 27th