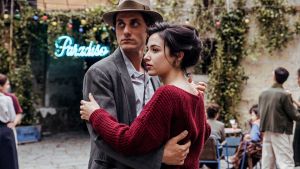 Martin Eden falls for Elena and the bourgeois opulence of her surroundings.

The reputation of Jack London’s unrivalled depiction of bad faith has endured in mainland Europe, where it has inspired various adaptations and songs and featured on Le Monde’s 100 greatest books of the 20th century. In Vladimir Nabokov’s Pnin, a character is dismayed when an American bookstore does not have the 1909 novel  in stock: “Strange! The vicissitudes of celebrity! In Russia, I remember, everybody – little children, full-grown people, doctors, advocates – everybody read and re-read him.”

Pietro Marcello’s wildly ambitious new version transports Martin Eden from turn-of-the-century Oakland, California to Naples in the 1920s where – thanks to archive footage and dazzling editing work from Aline Hervé and Fabrizio Federico – the revolutionary socialist Errico Malatesta listens to Eden’s repellently individualistic ideology. The character’s politics and rejection of communism as a “slave morality” differentiates him from his socialist creator. In most other respects, however, the story is autobiographical. Or as London had it: “I was Martin Eden.”

Like London, Eden – unforgettably essayed by the magnetic Luca Marinelli – is a girl-chasing, adventurous, handsome bruiser until he rescues a young nobleman named Arturo (Giustiniano Alpi) from a beating. Arturo invites Eden, more as an object of curiosity than out of gratitude, to his family’s palatial estate. Here, Eden falls for Arturo’s sister Elena (Jessica Cressy) and the bourgeois opulence of her surroundings. He vows to become worthy of her by embarking on a gruelling programme of study, writing and self-improvement.

An accomplished autodidact, Eden becomes as infatuated with the social Darwinist writings of Herbert Spencer as he is with Elena. His prolific output as a writer is repeatedly rejected. There is something of Nietzsche’s transvaluation of values in Eden’s betrayal of himself and his class, and director Pietro Marcello does not shy away from such weighty philosophical themes.

In theme and appearance, Martin Eden straddles such Italian cornerstones as De Sica’s Bicycle Thieves and Bertolucci’s The Conformist. It’s a sweep of cinematic history earned by the film’s aspirations. No film could replicate the tragic weight of London’s work, but this comes awfully close.