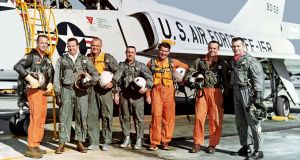 In 1972, Rolling Stone publisher Jann Wenner dispatched New Journalism superstar Tom Wolfe to cover Apollo 17, Nasa’s last manned mission to the moon. While researching, Wolfe became curious about the astronauts and their motivations. What, he asked, would make a man “. . . willing to sit up on top of an enormous Roman candle, such as a Redstone, Atlas, Titan or Saturn rocket, and wait for someone to light the fuse?”

Wolfe was especially intrigued by the original Mercury Seven. This elite group of men selected from the US military had a lot in common, Wolfe later noted in a 2015 Vanity Fair profile, being mostly oldest sons, born in the mid-1920s, named after their fathers, and raised in small towns by Anglo-Saxon Protestant families. More than half of them had “Jr” in their name.

Wolfe’s inquisitiveness inspired a four-part series of articles titled Post-Orbital Remorse, which he then amalgamated into the 1979 bestseller The Right Stuff, which in turn was adapted by Philip Kaufman into a 1983 movie.

We do films with no narration and no interviews. We want to go back to each era and experience the story in real time

Last month The Right Stuff, a new TV series based on Wolfe’s book, dropped on National Geographic/Disney Plus. This month, Wolfe, who died in 2018, is one of the archival stars of The Real Right Stuff, a fascinating new documentary portrait from the Emmy and Peabody Award-winning filmmaker Tom Jennings.

“We were lucky in that we found footage of Wolfe being interviewed by Tom Brokaw,” says Jennings. “He was also interviewed extensively by Studs Terkel on his radio show in Chicago. And we were able to access that. I like to get back to the source and you don’t get closer to the source than the guy that wrote the book.

“What a great storyteller. I loved to listen to him telling the stories. Younger people probably don’t know a lot about Tom Wolfe. But The Right Stuff when it was published was such a landmark book. I remember the paperback version being everywhere. It completely captured the public imagination. You had Chuck Yeager, this over-the-top character, who ended up not being part of the space programme. And, as Tom Wolfe explains in our film, the Mercury Seven came along when the country needed heroes. If you look at the footage, they were like The Beatles before The Beatles came to America.”

Jennings has won some 48 awards to date, including three Emmys, a Producers Guild of America award, and another two from the Writers Guild of America. In common with Asif Kapadia’s Amy and Diego Maradona, The Real Right Stuff eschews narration and contemporary talking heads in favour of careful archival research and assembly.

As a director and producer, Jennings has worked across a wide range of subjects – Malcolm X, Patty Hearst, Fidel Castro and Princess Diana have been chronicled in their own words. But he is arguably best known for his Nasa-themed films Challenger Disaster: Lost Tapes, The Lost Tapes: Apollo 13 and Apollo: Missions to the Moon.

“We get along pretty well with Nasa, ” laughs Jennings. “And it’s unfortunate that Nasa has had to cut its budget over the years, especially the past few years. But there are a few researchers left that are very familiar with us and what we do. And they like what we do because of the style that we use. We do films with no narration and no interviews. We want to go back to each era and experience the story in real time. People are always surprised that we can make the films work.”

Nasa is right to be impressed by Jennings and his team’s meticulous approach to filmmaking. He tells a story about the thousands of hours of footage they pored over ahead of the Challenger documentary, made to mark the anniversary of the space shuttle tragedy and the fate of its crew, particularly Christa McAuliffe, the first civilian to be launched into space.

“We made it for National Geographic in 2016,” says Jennings. “We were finding things that people have never seen or heard before, specifically with Christa McAuliffe, who was the teacher in space. She had lessons planned and she was going to beam those back to Earth to schools all around the world. They were experiments that she was going to demonstrate in the space shuttle. In order to prepare for that, she was rehearsing those lessons in the space shuttle with a film crew before the launch.

“We had never seen this footage before and there was a ton of it. When you go to Nasa and ask for documents on Challenger or Mercury, they send you a box or boxes and say here’s all our stuff. In the case of Challenger, they sent us 40 Beta tapes. They had sent it out to other producers who probably got through the first 10 tapes and stopped looking. But we have a wonderful team of researchers, and the McAuliffe footage happened to be on tape 38. That won an Emmy for research for us.”

While sorting through the staggering amount of material (500 hours of footage, 800 hours of audio, 10,000 still photographs) that went into the making of Apollo: Missions to the Moon, Jennings happened upon a stunning cache of films from the Mercury programme. And then came a happy coincidence.

“We started looking at the Mercury footage and because they were shooting on film back then, it was gorgeous to look at,” he recalls. “And then National Geographic announced that they were going to be doing an eight-part episodic fictional version of The Right Stuff. So I met the executives who worked with us on Apollo and said maybe we could do a non-fiction companion piece. And they said: what a great idea. And the more we looked, the more we discovered that this is one of the stories that you think you know.

“Oh, the Mercury guys. Alan Shepard and John Glenn. But do you remember 10,000 people standing in Grand Central Station in New York all looking up at the television in absolute silence as they’re waiting to see if the astronauts are going to make it?”

As The Real Right Stuff captures, the apple-pie heroism projected on to the Mercury Seven –  Scott Carpenter, Gordon Cooper, John Glenn, Gus Grissom, Wally Schirra, Alan Shepard and Deke Slayton – was largely manufactured by Life magazine, which gave the men $25,000 a year (three times their annual salary) for the exclusive right to tell their stories. And in a United States that was lagging way behind the Soviet Union in the space race, those stories were required to be wholesome.

“The Mercury Seven didn’t really know what they’re doing,” says Jennings. “But they were racing the Soviet Union so they became representative of the American male whether they wanted that or not. They had to refine their images when Life magazine came along and said we’re going to pay you a lot of money but you guys need to be clean-cut American boys or it’s not going to fly.”

At least one of the astronauts was the real deal. Churchgoing family man John Glenn – who has emerged as a hero in many accounts, including 2016’s Hidden Figures – would lock horns with Alan Shepard on the matter of “cookies”, this being the favoured term for astro-groupies. It’s an anti-bromance that makes quite an impression in The Real Right Stuff.

“There is a kind of romance about the Mercury guys,” says Jennings.”I think in looking at Apollo, which we did last year for National Geographic, once we got to the moon everybody lost interest in space. People stopped caring about moon rocks. It took the near-tragedy of Apollo 13 to get people interested again.

“It was almost like we finished the marathon. We got there. It’s over. But the Mercury guys were first. And Glenn really was a good guy.”

The Real Right Stuff is on Disney+ from November 20th