New this week: My Friend Dahmer, Pandora's Box and That Summer 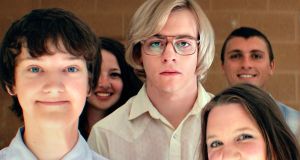 MY FRIEND DAHMER ★★★★
Directed by Marc Meyers. Starring Ross Lynch, Alex Wolff, Anne Heche, Dallas Roberts, Miles Robbins, Vincent Kartheiser. 15A cert, limited release, 107 min
Moving study of Jeffrey Dahmer, future serial killer, as he grows up awkwardly in 1970s Ohio. Those unaware of Dahmer’s fate could see the film as an angular take on 1970s loserdom played to melodies from the Lars Von Trier songbook (stark, liquid camerawork; awkward riffs on learning disability). Most of the audience will experience something else: a variation on Carrie that ends with the actual death of 17 men. Full review DC

Compellingly lurid melodrama from 1929 about a woman who refuses to conform to the expectations of society. Lulu (Brooks) is both kept and curtailed by a series of men. The sight of “first patron” is frightful, but Lulu’s luck truly runs out after she marries a wealthy doctor and newspaper editor, snatching him away from another, more “respectable” fiancee. His sexual possessiveness leads to murder and a series of sensational plot twists, wherein Lulu attempts to evade sexual slavery and Jack the Ripper with a little help from some friends, including an acrobat, a lesbian, and a boozy dwarf. Brooks retired from movies in 1938, two decades before French critics realised that Pabst’s film was a masterpiece. TB

In 1972, photographer Peter Beard and socialite Lee Radziwill (the younger sister of Jacqueline Kennedy Onassis) began filming Radziwill’s eccentric aunt and cousin, Edith Bouvier Beale and Edith “Little Edie” Bouvier Beale, in their Long Island home. The estate was overrun by raccoons and feral cats and had no water of electricity. Radziwill abandoned the project but her cameramen, the Maysles brothers, returned to make Grey Gardens (1975), one of the great American documentaries. This prequel, fashioned from Radziwill and Beard’s footage, is a must for Edie-ologists. TB

The latest from Kilkenny’s Cartoon Saloon concerns a girl in Taliban-controlled Kabul who is forced to dress as a boy to support her family. If the previous Cartoon Saloon features, Song of the Sea and The Secret of Kells, had a flaw, it was a lack of discipline in their narrative structure. Despite its frequent diversions into high fantasy, The Breadwinner has greater momentum and a more secure story arc. As ever, the visuals are gorgeous. Full review DC

By any reasoning, O’Sullivan’s hybrid portrait of the art collector and gallery founder Hugh Lane simply shouldn’t work. The film’s marriage – or rather menage – of talking heads, artistic flâneurism and historical recreation ought to make for a screaming match, or at the very least uneasy transitions. But working from Mark O’Halloran’s fiendishly clever script, the December Bride director and dexterous editor Mick Mahon have fashioned a project as elegant as its subject. Full review TB