Jurassic World: Fallen Kingdom: ‘I wanted a dinosaur that would be very scary’

The trailer for the next film in the 'Jurassic' series has arrived. Released in June 2018. 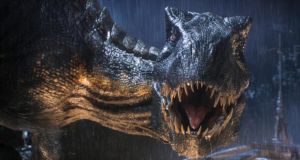 Jurassic World: Fallen Kingdom: the indoraptor was designed in consultation with Jonathan Cranston, an English veterinary surgeon with experience with wildlife in South Africa

When Steven Spielberg and his producing partner Frank Marshall decided to reboot the Jurassic Park franchise for a new generation they knew exactly who they wanted for the gig.

JA Bayona, the much-admired Spanish director of The Orphanage and A Monster Calls, topped their shortlist. It ought to have been a career-making moment. But with only a short preparation time attached, Bayona felt obliged to say no.

Colin Trevorrow, the director of the lo-fi sci-fi Netflix hit Safety Not Guaranteed, was recruited instead. Jurassic World, the fourth film in the franchise and the first instalment of a planned trilogy, became the fifth-biggest motion picture in history, rustling up almost $1.7 billion in box-office receipts.

Steven Spielberg makes you feel like you’re the most important person in the room. And I really appreciated that

“That was something I learned from talking to Guillermo del Toro, who produced my first movie,” Bayona says. “He always reminds me of the lessons he has learnt in Hollywood. And one of them is, Don’t be afraid to say no. I had to say no. The timing wasn’t right.”

Happily, Juan Antonio Bayona would get another shot at the franchise in which dinosaurs run amok. The second movie of the new trilogy, Jurassic World: Fallen Kingdom, retains Trevorrow as a writer and series “architect” but brings Bayona on as director.

Trevorrow, who lately parted ways from Star Wars: Episode IX, will return to directing duties for the next Jurassic instalment. Trevorrow’s expulsion from the galaxy far, far away (not to mention the recent kerfuffle and director-swapping on Solo: A Star Wars Story) lends credence to the notion that directors aren’t really directing the juggernaut franchises.

“But it’s great to have others to ask for advice,” Bayona says. “You put yourself in service of the saga or the franchise when you take on one of these movies. You want to make the best Jurassic movie possible. You’re not coming in to hijack Steven Spielberg’s baby. Or Colin’s baby. For me, as a director, it was very exciting to be in charge of the second episode. For me, the story is established and I’m the person who gets to turn the Jurassic World upside-down. It’s very interesting to do a chapter that’s very different to anything that’s been done before.”

Being put in the service of Jurassic World means that Spielberg, who directed the first two Jurassic Park movies, watches your dailies. That’s not as intimidating as it sounds, says Bayona.

“I was always a huge fan of Steven Spielberg. I grew up watching his films, and I’m a huge fan of his craft. So it was an incredible opportunity to get to work with him. Having him sit down and go over the shots I was going to do and the shots I had done and listening to his always enthusiastic responses was very, very special. I felt very supported and empowered by Steven all the time. He has a quality about him that makes you feel like you’re the most important person in the room. And I really appreciated that.”

Having departed the repeatedly doomed World War Z sequel, Bayona signed up for dinosaur wrangling in January 2016. He immediately rewatched all four Jurassic films, reread the books and took notes on favourite scenes.

Trevorrow “told me from the very beginning that he thought I was the right director, because of The Orphanage, specifically, which was a horror film,” Bayona says. “It was very exciting for me to bring that kind of suspense to the dinosaur world. If you remember the moments of suspense from the very first Jurassic Park film – the T rex and the car, the velociraptors in the kitchen – that’s what we trying to do.”

Bayona, who was born in Barcelona in the final year of Franco’s dictatorship, was still a teenager when Jurassic Park opened at his local multiplex. He still recalls his sense of elation seeing realistic dinosaurs on screen for the first time. He never imagined that he would be directing the fifth Jurassic film some 20 years later, with Jeff Goldblum attached.

“I had already read the book by Michael Crichton, and I remember the experience of watching the movie very vividly,” he says. “I remember that first moment I saw a dinosaur re-created with CGI. I felt that I was witnessing something that was pivotal, something that would stand the test of time. But I was also excited because I knew, from that moment on, that everything was possible on the big screen.”

Bayona’s early superfandom means that Jurassic World: Fallen Kingdom has more dinosaurs than any previous instalment and features the franchise’s most dangerous beastie to date. The indoraptor was designed in consultation with Jonathan Cranston, an English veterinary surgeon with experience with wildlife in South Africa.

“The Jurassic movies are not a fantasy,” says Bayona. “Going back to the original Michael Crichton novel, they are grounded in reality. The series is based in real scientific theories. All of the dinosaurs, even the ones that we’ve invented, are based on what we know about dinosaurs. All of the details are taken from real animals.”

That doesn’t preclude a little artistic licence. In addition to a squadron of puppeteers and animatronics experts, the indoraptor was formed by chatting with palaeontology-mad kids. These consultants were keen to overthrow the conservative colour scheme that has defined the representation of obsolete lizards onscreen. In Bayona’s film black is the new grey-green.

“So many children play dinosaurs in their rooms,” Bayona says. “We had a lot of expertise on the film, but the opinions of kids I almost value even more, because they’re so honest. I was very interested in the way that they talk about dinosaurs. They talk about textures and colours. I wanted to create a dinosaur that would be very memorable and very scary for them. I wanted to create something that was very dark – almost black – with very white teeth, so that when you see it in the dark it’s very effective, just a set of eyes and teeth.”

Jurassic World: Fallen Kingdom’s returning cast includes Blue – the comparatively cuddly velociraptor – and the screwball-comedy-compatible Claire (Bryce Dallas Howard) and Owen (Chris Pratt). The new film, set four years after the previous movie, sees the wisecracking couple return to Isla Nublar to rescue the remaining dinosaurs from a volcanic eruption. Predictably, the creatures are not as grateful or welcoming as they ought to be.

“I like we’re taking the story off the island,” Bayona says. “We’re taking the story one step further. We wanted the second half of the new movie to be kind of like a haunted-house story. It’s not about special effects or fireworks. It’s about building up tension in a very different way.”

Bayona’s films have focussed on children who have faced supernatural forces (The Orphanage), the Indian Ocean tsunami of 2004 (The Impossible) and terminal illness (A Monster Calls). Although Pratt’s character certainly flies the flag for the immature, Jurassic World: Fallen Kingdom is less obviously child-centric. But Bayona, the current favourite to direct the Superman film Man of Steel 2, says there’s still a very human drama lurking beneath the dinosaur husbandry and the genre thrills.

Godzilla (Ishiro Honda, 1954) Not actually a dinosaur but a mutation born of radiation and postatomic Japanese panic.

The Land Before Time (Don Bluth, 1988) The film that introduced the adorable apatosaurus named Littlefoot has spawned 13 sequels and a TV series.

The Tree of Life (Terrence Malick, 2011) You’re watching a poignant family drama set in 1950s Texas when, for cosmic reasons, a healthy dinosaur encounters an injured dinosaur but decides to do the sporting thing.