Review: They don’t make inappropriate girl-slapping erotica like they used to 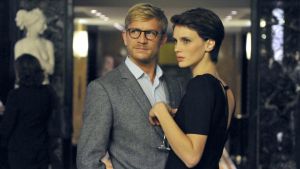 The prolific Ozon opens this overheated psychosexual thriller with a speculum-view of a vaginal examination, an image which is referenced again and again in a film that pointedly trades on doubles and duplicates. There’s even a mini-lecture on an XXY cat.

Classic Parisian gamine Chloe (Vacth) is suffering from stomach cramps that are believed to be psychosomatic in nature. She starts to see Paul (Renier), a psychoanalyst. Before you can say “code of ethics”, they’ve moved in together. And that’s when Chloe discovers that Paul has a secret identical twin: a meaner psychoanalyst for whom “no” means “Yes!”

Cinematographer Manuel Dacosse (The Strange Colour of Your Body’s Tears) adds odd elongations and angles to sustain the freak out factor.

If you’ve watched any movies before – forget the similarly themed Body Double or Dead Ringers; even Finding Dory will suffice – you’ll soon ponder whether the twins are real or if they’re the only set of twins.

Were L’Amant Double the work of any other film-maker – one without the credible female-oriented pictures 8 Women and Swimming Pool on his CV – it would make for unimaginatively troubling viewing.

Working from Joyce Carol Oates’s eighties mystery-pulp Rosamond Smith books, Ozon appears to be having a pop at all phallocentric sleaze. His efforts aren’t entirely convincing. They don’t make inappropriate girl-slapping erotica like they used to. And with good cause.