Could video games have been a factor in Florida shooting? 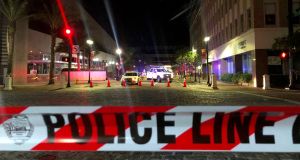 It’s a long-standing argument: do violent videogames – or films or TV – increase violent or aggressive behaviour in real life? Particularly after mass shootings in the US, a shooter’s gaming habits are often scrutinised, but analysis shows videogames rarely play a significant role in the lives of US mass school-shooting murderers.

The research connecting videogames and real life violence is inconclusive and conflicting.

But in the case of this week’s public shooting in the US – in Jacksonville, Florida – a connection initially appears striking. The 24-year-old killer, David Katz from Baltimore, was playing in a videogame tournament, and the two people he murdered with a handgun, Eli Clayton and Taylor Robertson, were other contestants, previous winners of the tournament, whom he appears to have specifically targeted at the GLHF Game Bar (short for “Good Luck Have Fun”). Eleven others were wounded before Katz killed himself.

Witnesses were quoted saying Katz was a disgruntled gamer who was angry he lost a game in the tournament.

Can we draw a connection here between exposure to screen violence and increased propensity towards real violence? Prof Gerry Moore, associate professor of psychotherapy at Dublin City University (DCU), says “the jury is still out” on academic research linking gaming and violence. However, it does show that gaming can reduce pro-social behaviour (voluntary behaviour that benefits others) and empathy.

He says evidence also suggests that if you are exposed to violence over time, in real life or in games, it desensitises you to aggressive behaviour.

Nearly all children in the US play videogames, 85 per cent of which contain some form of violence.

The American Psychological Association (APA) considers violent videogames a risk factor for aggression and says playing them can increase aggressive thoughts, behaviours and feelings, both short term and long term.

According to the US nonpartisan think-tank, National Center for Health Research, studies show the longer boys or girls are exposed to violent videogames, the more likely they are to have aggressive behaviours and thoughts.

When there is competition, especially with young males – we see it played out on sports pitches every week – people may become aggressive because of it

It says some studies show competition between players is a better predictor of aggressive behaviour than is the level of violence. This could be relevant to the Florida shooting. Winners of the American football Madden NFL 19 videogame tournament, where Katz was competing, go on to finals in Las Vegas, with a $165,000 (€141,000) prize.

Gerry Moore at DCU agrees. He points out that even though Katz wasn’t playing an ostensibly violent wargame, “people get hyped up during games and it can increase aggressive thoughts and reduce pro-social behaviours”. He says: “When there is competition, especially with young males – we see it played out on sports pitches every week – people may become aggressive because of it.”

But there are always other factors, Moore says. “You have to add in the gun laws in the US. If you have access to a weapon, it is easier to use it.”

Moore says it may be less that the shooter was playing videogames, and more about the competition, which hyped up aggression, with the added factor of gun culture, he says.

Katz bought two guns legally in Baltimore within the past month. Federal law requires gun buyers to disclose involuntary commitment to a mental institution, and Maryland prohibits gun sales to those with a mental disorder.

According to his parents’ 2007 divorce court papers, Katz appears to have been a troubled teenager. He played videogames obsessively as a young adolescent, often refusing to go to school or to bathe, was hospitalised twice for mental illness, was prescribed anti-psychotics and antidepressants, and his parents disagreed on how to care for their troubled son.

This tallies with researchers who don’t dismiss a violence-gaming connection outright, saying exposure to media violence is one of a number of contributing factors to aggressive action.

In 2011 the US Supreme Court ruled videogames were covered under the First Amendment but that videogame content couldn’t be regulated by governments, partly because the psychological research was “unpersuasive”. Some academics point out that videogame studies are often flawed or are misrepresented and can add to moral panic. Problems with the research include how aggression is actually measured, publication bias, and the source of research funding undermining its results.

While videogames are most probably not the cause of violent behaviour, they can increase the risk of aggression

Prof Mona O’Moore, psychologist and founder/ co-director of ABC, the National Anti-Bullying Research and Resource Centre, at DCU, agrees “there is evidence to indicate that violent games do increase aggression and desensitise players making them insensitive to others’ suffering. So while videogames are most probably not the cause of violent behaviour, they can increase the risk of aggression.

“In my opinion it only stands to reason that, like all images on television and film, videogames will impact the way young people think, feel and behave. If this was not the case, advertising would be dead in the water and not the thriving industry it is.

“Whether children and young people act out their increased aggression resulting from violent videogames will depend on their psychological makeup [for example, psychopathic disposition] and their parenting, educational and societal background. Research has, unfortunately, predominantly used laboratory measures that may not at the end of the day be able to mimic real life.”

While studies have conflicting findings, she says, “research will invariably, with time, confirm common sense. So far the methodology, which is lacking in sophistication, is contributing to the controversial results that exist.”