Classical gig of the week: Westport Festival of Chamber Music

The historic setting of Westport House is the centerpiece of this fine boutique festival in Co Mayo featuring works by Grieg, Mozart, Bach, Shostakovich, Schumann and Fauré 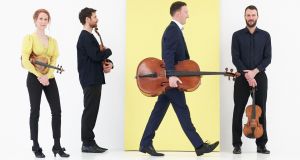 The strangest of good things happen in bad times. The Dublin Grand Opera Society was founded in 1941, in the midst of the Second World War. Wexford Festival Opera opened its doors 10 years later, when food rationing was still in force. John Beckett’s Bach cantata series in Dublin started in 1973, the year of the oil crisis, and Opera Theatre Company, now subsumed into Irish National Opera, presented its first production in 1986, when Ireland’s borrowing, unemployment and emigration were all headed in the wrong direction.

Westport is what you might call a boutique festival, running from a Friday evening to a Sunday afternoon, with pride of place going to concerts in Westport House, as characterful and idiosyncratic a historic venue as you’ll find on the Irish concert scene.

The future of the debt-ridden house was in doubt for a number of years until its sale last year to Hotel Westport Ltd. This was followed by the appointment of Tim Husbands as CEO. Husbands was the highly successful CEO of Titanic Belfast, but in July he jumped ship a second time, citing project delays as the reason for his departure from Westport. His plans there apparently included turning the estate into a major outdoor concert venue.

The chamber music festival and its artistic directors, violinist Catherine Leonard and pianist Hugh Tinney, have so far sailed safely through all the threats and changes. The Westport House concerts are held in a room that’s long and narrow, and if you don’t like the idea of intimacy with fellow concert-goers and performers you’d be well advised to stay away. That intimacy, of course, is what most people prize.

All of Saturday’s concerts are in Westport’s Town Hall Theatre, a venue which was not even up and running when the chamber music festival started. In the morning, rising cellist Killian White gives the Next Generation Artist Concert with pianist Gary Beecher. Works by Lowell Liebermann (his Yeats setting A Poet to His Beloved from Tritschler with a mixed ensemble that includes Hugh Tinney), Shostakovich (his Cello Sonata with Natalie Clein) and Fauré (his G minor Piano Quartet) form the main evening concert. And Tritschler is joined by pianist Michael McHale for a late-night performance of Schumann’s song-cycle, Dichterliebe.