A Festschrift for Anthony Coughlan review: book fails to focus on its subject 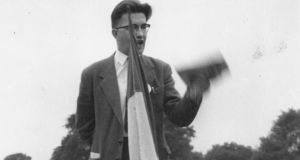 Anthony Coughlan’s relationship with the Communist Party is studiously avoided, as is his dalliance with the Eurosceptic right from the Lisbon Treaty referendum campaign to his support for the Tory exit from the EU.

Book Title:
A Festschrift for Anthony Coughlan Essays on Sovereignty and Democracy

A Festschrift for Anthony Coughlan: Essays on Sovereignty and Democracy is a deeply disappointing book. Billed as a festschrift, the intention is to celebrate its namesake’s contribution to Irish intellectual life. Instead it proffers a random series of essays to which Coughlan is peripheral.

While there are no strict rules for a festschrift, one would expect that the honoree would be central to its contents. A biography of its subject would have been welcome. Some critical assessments of his principal contributions to political debate and account of academic achievements would surely be obligatory.

Rather than getting a celebration of the important contribution made by Anthony Coughlan to our public debates on Irish and European politics, we are left with essays that, while written in Anthony’s spirit, tell us little if anything about the man himself and his political and intellectual activism over 60 years.

This is deeply disappointing for two reasons. First because such a book is needed as Coughlan has indeed made a vital contribution to our democracy. Second because the editors could have produced a better book given their proximity to the man and his ideas.

The book is divided into four sections. Three essays open the volume under the title “Assessing Anthony Coughlan”. Former MEP and prominent Dutch Eurocritic Jeans-Peter Bond offers a affectionate preface reminiscing on his lifelong friendship with Coughlan. Author and former Irish Times journalist Deaglán de Bréadún pays tribute to Coughlan as an alternative and at times lone voice on European Union affairs. In contrast to the two short tributes, UCD economist Ray Kinsella provides commentary on Irish politics from the United Irishmen to the present. Unfortunately for the reader the three openers provide little if any actual assessment of the book’s subject.

The weakest section of the book is titled “The European Union: Perspectives and Alternatives” with contributions from Finbar Cullen, Mícheál Mac Aonghusa, Tommy McKearney and Eoghan O’Neill. Each writer provides a critique of the EU, challenging the democratic deficit and neoliberal bias inherent in the integrationist project. While sympathetic to their critique, I was disappointed if not unsurprised by their failure to outline any actual alternative.

The book’s final section is a mixed bag of historical essays covering a wide range of topics including the London-based Connolly Association, the Northern Ireland Civil Rights Association, the work of Marxist historian Desmond Greaves, the history of the Greaves Summer School, anti-republican bias in the Irish media’s coverage of the peace process and some thoughts on social prejudice. Michael Carty’s essay on Coughlan’s London activism from 1958-1961 is one of the only occasions in the entire collection when we learn directly about the subject of the festschrift. Ruan O’Donnel’s short history of the Connolly Association is also of note.

Unfortunately the better essays in this section are lost in a collection of eight contributions that lack any common thread or coherence. Indeed the fact that this section of the book, which takes up more than half of the total, talks more about Desmond Greaves than Anthony Coughlan, speaks to the publication’s central weakness.

Oddly, the book closes with a contribution from journalist and political activist Eoin Ó Murchú which rightly belongs in the “Alternatives” section. Like the other contributions in that section this essay is strong on critique but weak on actual alternatives.

This lack of detailed alternatives is another great disappointment of the book. A number of writers – Kinsella, O’Neil and Ó Murchú – make Irish exit from the EU the central focus of their essays, a cause strongly advocated by Anthony Coughlan himself. Unfortunately, nowhere in this book’s 149 pages is a credible case set out in support of this position. I say unfortunately because I would genuinely like to hear the case from its advocates.

Rather, Irexit is presented as a rhetorical slogan by which to demonstrate the radicalness of each author’s political position. Given the profound impact such a course of action would have on the Irish economy and its society – positive or negative depending on your point of view – there is a responsibility on those advocating Irexit to set out the case.

The collection has a number of other omissions. The thorny question of Anthony Coughlan’s relationship with the Communist Party is studiously avoided. So too is his dalliance with the Eurosceptic right from the Lisbon Treaty referendum campaign to his support for the Tory exit from the EU.

For many years our public debate on the EU – and the union’s impact on our sovereignty, democracy and economy – was characterised by a suffocating group think. Europhile evangelists – whether academics in UCD, lobbyists in the Institute of European and International Affairs, or leader writers in papers – sought to dismiss opponents of EU integration as dishonest cranks deliberately misleading the public.

Anthony Coughlan was often a lone and brave voice asking the uncomfortable questions and highlighting the dangers of such an uncritical attitude. Thanks to him and indeed many of the people writing and referenced in the festschrift, our public debate is more balanced today – Brexit hysteria not withstanding.

As an activist and writer I have been heavily influenced by Anthony Coughlan and the Eurocritical left republicanism which he has promoted throughout his life. That is why I would enthusiastically welcome a book that details his life and critically assesses his ideas. Unfortunately this is not that book.