Fantastic beasts and where he found them: Frans Post in Brazil 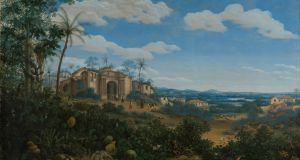 Curious Creatures at the National Gallery of Ireland centres on a recently identified group of drawings that expand and enhance our understanding of the work and world of the 17th-century Dutch artist Frans Post (1612-1680). Post’s reputation rests on his being the first European artist to experience and paint the landscape of Brazil, then largely a Portuguese colony.

Towards the end of October 1636, just short of his 24th birthday, Post set sail for Brazil as part of an expedition comprising the flagship Zutphen and four escort vessels. Post’s elder brother, the highly regarded architect Pieter Post, had worked on the residence of the Count of Nassau-Siegen, Johan Maurits, in The Hague. Maurits had just been appointed governor-general of a substantial region, dominated by the province of Pernambuco, in northeast Brazil. The Dutch West India Company had seized the land in 1630, and Maurits was charged with consolidating the Dutch colony and boosting the productivity of its lucrative sugar plantations. Maurits brought with him scientists and artists (including Post and Albert Eckhout) to explore and document this vast terrain and its inhabitants. The presumption is that Pieter’s endorsement won Frans his berth on this adventure.

Working from his drawings made on the spot, Post was able to make paintings that accurately described that distant world

Post’s specific assignment was to make topographical studies of the main civil and military locations in the Dutch-controlled territories. He set to the task with great energy and evident enthusiasm, in landscapes that sometimes seem to verge on the naive but are always exceptionally immediate and alert with the wonder of discovery. His term in Brazil was tied to Maurits’s tenure, which came to an end just 7½ years later. Relations between Maurits, who loved Brazil, and the company were strained from the first. Conceivably, that might have been because he was a (relatively) tolerant governor, encouraging of minorities and in favour of co-existence rather than repressive domination. But the sugar trade was a cruel industry dependent on the brutality of slave labour, and Maurits was by no means a humanitarian when it came to slavery.

In 1637 he dispatched a punitive expedition to the African Gold Coast, clashed with the Portuguese there and initiated Dutch involvement in the slave trade. Shockingly, more than 20,000 people, mainly from Angola and Guinea, were enslaved and brought to Brazil during his tenure.

He returned to Holland heavily laden with the fruits of research and a vast store of artefacts and specimens. They formed his Brazilian cabinet of curiosities – “taxidermy specimens, musical instruments, weapons and shells” – at his home in The Hague. That home, the Mauritshuis, is now celebrated as the Royal Picture Gallery, home to a stunning art collection. About 25 years after Maurits’s death in 1679, a fire at the Mauritshuis destroyed most of his cabinet of curiosities, but in his lifetime he had sold or gifted much of his collection of art and artefacts around Europe.

Post, meanwhile, had returned to his home city, Haarlem, and established himself there as an artist. This was during a time that became known as the Dutch Golden Age, and the art market, while competitive, was thriving as never before, with a whole new class of buyers, far removed from the traditional royal or ecclesiastical patrons. With his Brazilian experience, and as the first European artist to paint the Brazilian landscape, Post found a market among those who had, like him, spent time in Brazil and returned home. After the Portuguese won back control of the notionally Dutch territory in 1654, there was a great influx of returning colonists. Working from his drawings made on the spot, Post was able to make paintings that accurately described that distant world and, as his reputation grew, paintings that were less accurate but satisfyingly exotic. Brazil remained his principle subject matter for the rest of his life.

Many of his Brazilian paintings are distributed throughout European galleries, including the National Gallery of Ireland, which has a fine example, Brazilian Landscape with a Sugar Mill. A notable feature of this painting and other of his Brazilian works is the veritable menagerie of animals deployed across the foreground. A good example of the menagerie is evident in another fine painting on loan from the Rijksmuseum, Amsterdam, for the exhibition.

View of Olinda, Brazil was painted in 1662. In it, worshippers congregate outside a church to the left, an example of the Portuguese architecture Post admired. To the right, a group of Africans are depicted in a similar gathering. A memory of, and/or a nod to Maurits’s reputation for tolerance? It was, after all, 18 years on from Post’s return from Brazil. Again in the foreground is a collection of exotic animals. The close proximity of monkey, sloth, armadillo et al is blatantly implausible, but each is rendered with scrupulous regard for individual accuracy.

View of Olinda is noted for its elaborately carved frame; as curator Niamh McNally notes, it is the only known surviving contemporary frame on a Post painting. Now it is reasonable to surmise that the virtuoso woodcarving of the frame, an intricate composition of tropical flora and fauna, was made with reference to Post’s own drawings, made during his time in Brazil. There had long been speculation about the existence of such drawings, given the numerous detailed, accurate depictions of animals in the paintings.

Then the missing link, the drawings themselves, were finally found and identified by the curator of Image Collections at the Noord-Hollands Archief in Haarlem, Dr Alexander de Bruin. In 2013, during the course of an inventory of drawings in the archive, he came upon a cache of unsigned, exotic animal studies of high quality, 34 in all. He instinctively felt that they could be Post’s original studies. His hunch was confirmed when he compared the drawings with the animals that appear in Post’s paintings, and indeed on the carved wood frame of View of Olinda.

This is the first time paintings by Post will be seen in company with the drawings that served as his sources. In addition, MacNally has borrowed a number of exhibits from the nearby Natural History Museum, redirecting our attention to the fabulous and unlikely menageries of creatures that Post encountered and documented so faithfully in Brazil.