In this hyper linked world of gifs and meme, we risk, in a take on the words of Socrates, becoming what we see 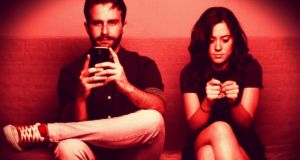 On reaching the 50th anniversary of the French événements of 1968 it may seem a curious preoccupation to be thinking about the practice of reading; violent mass protests, street battles and ferocious police brutality being more immediately associated with that spring eruption of half a century ago; far from the slow glide of the eyes, the lowered breaths of a silent reader, although many a Molotov cocktail has been launched from a page. But in thinking about what’s been termed today’s “attention economy” and its relation to the technological explosion of modes of “connectivity”, the role of reading is an aspect to be ignored at our collective peril.

Philosopher-poet Guy Debord’s 1967 treatise, The Society of the Spectacle, presaged not only the événements of 1968 in France, but forensically diagnoses our Trumpian age. Debord’s title alone is often used as shorthand for the image-saturated, comprehensively mediated way of life that defines us all.

A founder member of the Situationist movement, Debord outlines spectacle creep as an increasing tendency towards the expression of social relations through commodities: I buy/sell, therefore I am – what we now term “prosumerism”.

In a series of aphorisms, by turns technically dense or poetic, Debord abstracts from the prosaic of capital, of, in the words of Henry James, “all this trying to get”, to try to formalise human subjectivity within the belly of the beast capital.

Historically, the act of symbolisation that is reading redefines subjectivity. The ability to decode, from papyrus to book to film to photograph to ad to gif to emoji on a handheld screen, changes the human sense of being – develops, as Walter Benjamin termed it, an “optical unconscious”.

For Debord, the interweave of advertising, entertainment and news, served to “derealise” the world, served to simulate and spectacularise experience, thus altering representation and selfhood.

As we read, so shall we be read: online images surveill their users, registering eye movements, behaviours, preferences

In recent years the scope of the spectacle has expanded hugely with the proliferation of new media and social networking. From early on Donald Trump adopted, and adapted to, media technology using its tools to spectacularise his life all the way to the White House. Technology expands (Moore’s law) faster than the plod of our eyes across a screen.

We need to think ahead because, in a take on the words of Socrates, we become what we see– Socratic epistemology has us infuse our consciousness with the object of sight, much as Freud later theorised. And in the latest tech expansions, as we read, so shall we be read: online images surveill their users, registering eye movements, behaviours, preferences.

The uncovering of Cambridge Analytica’s proxy politics, the Mercer & co networks linking to election fraud and massive corruption, is another alarming example of what reading in the post-democratic 21st century is morphing into.

To think ahead we may need to go back. In her book, Eros the Bittersweet, poet Anne Carson writes of the spectacular leap the ancient Greeks made through innovating the alphabet. Around the early 8th century the Greeks modified the syllabic sign-system of the Phoenicians by “introducing the vowels”.

Until then every pronounceable sound of language had a separate sign, requiring hundreds of signs each representing a single syllable of vowel plus consonant. The Greeks split these pronounced units of sound apart into their acoustic components. Vowels came into being, symbolising the action of the breath passing through the space of the human throat as it vibrates the larynx. The innovation of our alphabet becomes really effective by the isolation, and symbolisation, of the start and stop of each sound - the consonants.

Consonants in themselves, without the exhaling vowel, actually have no sound. The genius of the Greeks can be seen in their deployment of these isolators: representing the unutterable in symbolic form – an act of intellect, of “abstraction from anything an ear can hear or a voice say”. Carson stresses the ancient analogy between language and love implicit in this phenomenon with “the breath as universal conductor of seductive influences and of persuasive speech”.

Seduction on the page then – those black shapes arousing our attention, conjoining our thoughts into delicious imaginings – also serve to isolate us: Descartes’s res cogitans, the thinking substance, independent on to itself, suggests too the isolation that reading requires.

The development of the spectacle redefines literacy. It is a view of a modern society in which authentic social life has been replaced with its representation.

Moving from oral culture, those societies of sound in which continuity is vital and ears remain open to every influence, literacy withdraws. The act of reading requires a focused attention that cuts off from immediate surroundings. The reader is alone in her book’s universe, she reads therefore she is. Who can forget the pleasure of sentences coming into being as one first learned to read? The recognition that you could put all components together, no matter with how much variety they had landed on the page, and draw meaning from it all by yourself.

But for Debord, the development of the spectacle redefines literacy. It is a view of a modern society in which authentic social life has been replaced with its representation. What was once directly lived becomes mere representation. The spectacle supplants genuine activity, being not just a collection of images, “rather, it is a social relation among people, mediated by images”. It is this dynamic – the commodification of human capacities of attention – that defines our age. It is what calls upon us to attend to attention, consider how it is being trained.

German writer and artist Hito Steyerl considers just this in her body of work examining the ghost in the machine – digitisation. Steyerl explores the “algorithmic nonconscious” of current technological advancements through her writings and art films, which come at the techno juggernaut from all angles and variety of creative association. For example, from Leonardo Da Vinci’s Salvator Mundi, recent achiever of the highest price ever paid for a painting, she moves, using the detail of the crystal orb representing the world held in Christ’s hand, to the 360 degree VR goggles currently proffered by Mark Zuckerberg & Co, “to teleport you into realities”. Steyerl uses situationist techniques to fracture awareness, stacking current realities – “default fakeness, bubble markets and financial speculation” next to this engram of Da Vinci’s humanist vision.

Throughout her work she counsels new kinds of reading essential for grappling with the “condensations or displacements of the current technological disposition”.

A major concern, as much for surveillers as for surveilled, is the fatberg-colossus of data (that amoebic precursor of content) accruing exponentially. Content merely nibbles at the edges of what data reaps. By contrast, a scarce though quantifiable commodity is that old fashioned thing – the reader, creating a competitive industry of mobilising forces in order to capture “eyeballs”, provoke “click throughs” and create “circulationism” (the more an image moves through the digital or real world, the more power it accrues).

Much of the business of tech signage carries on invisibly to our animal senses. Digital replication rides on “electric charges, radio waves, light pulses encoded by machines for machines, zipping by at slightly subluminal speed”. Seeing, Steyerl writes, “is superseded by calculating probabilities. Vision loses importance and is replaced by filtering, decrypting and pattern recognition”. Literacy today takes place within the networked space of the “military-industrial-entertainment complex”. Google’s neural network programmes activate “inceptionism” or “deep dreaming”, a form of pattern recognition that trains networks to build classified shapes out of sheer “noise” – data without coherent shape, a form of defensive reading Steyerl ironically recommends we humans adopt in dealing with digital information. “But inceptionism is not just a digital hallucination. It is a document of an era that trains smartphones to identify kittens, thus hardwiring truly terrifying jargons of cutesy into the means of production. It demonstrates a version of corporate animism in which commodities are not only fetishes but morph into franchised chimeras.”

Socrates’s meme – we become what we see – becomes hyper-redolent on considering our relation to such networked image-products. Projective identification of our deepest desires into standardised modalities that use image recognition programmes to realise a hand-held universe of cute. Meanwhile, the planet burns. And where have all the curlews gone?

Facebook, Google, Cambridge Analytica: The last word goes to Debord as he thinks through a society in which all social needs can be met only through technological mediation, in which all administration and contact between people has become totally dependent on these means of instantaneous communication, if such is the case then “it is because this communication is essentially unilateral”.