Partition epic: My father was born the same day as Northern Ireland

Michael Hughes: My novel only took flight when I decided I was dodging the real story – the conflict 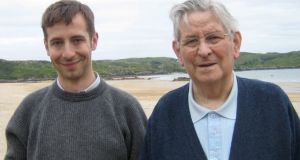 Michael Hughes and his father, who was born on the same day Ireland was partitioned

December 23rd, 1920, is probably the most significant date in modern Irish history that no one on the island stops to remember. If you don’t recognise it, you’re hardly alone. Perhaps the centenary, in two years’ time, will change that, since the ructions over Brexit mean the whole subject is a hot topic again, for the first time in a couple of decades. For it was on that day the Government of Ireland Act came in to force, creating Northern Ireland.

But I’ve always had another reason to mark the anniversary. Our house in Keady was a rare one in the North that took time every year to commemorate that momentous day. We’d pause the Christmas preparations to wrap a few books on Irish politics and a couple of boxes of chocolate-covered Brazil nuts, and leave them by the TV the night before, to be discovered in the morning as the year’s most predictable surprise. Because December 23rd, 1920, is also the day my father was born.

When I discovered the coincidence, I allowed my writer’s imagination to grace him with historical significance. What if my father was the first baby born in the newly partitioned six counties? Someone had to be. Here was a novel, I told myself. I was going to fictionalise his life in a Midnight’s Children-type epic, following the nine decades he lived in the same street a handful of miles north of the Border, negotiating family and faith and business, as the politics of the place and the values of the wider world changed around him beyond all recognition.

There were a few choice details available to get me started. He was the first baby delivered by a certain Dr Dorman, newly arrived from Co Cork to take up a position as the town GP. And almost 90 years later, another Dr Dorman, that man’s grandson, cared for my father in his final illness. He was a school friend of Patrick Magee, the actor for whom Beckett would write Krapp’s Last Tape, and he performed in the parish drama group with Tommy Makem, the folk singer whose early Greenwich Village gigs were a key influence on the young Bob Dylan.

There was an American connection in the family too, supported by a musty letter produced occasionally from a biscuit tin, which worried that a relative who’d joined the cavalry might have been killed “in the wars with the Indians”. It was often said that another US emigrant was an ancestor of Richard Nixon, while on my mother’s side, the most notorious entry in the family tree was James McParlan of the Pinkerton Police, the infamous union-buster portrayed by Richard Harris in the movie The Molly Maguires. Plenty there to fire the imagination.

Although this was a book I’d love to read, it wasn’t one I knew how to write. And besides, my own ancestors were the ones who’d stayed put. All eight of my great-grandparents are buried within ten miles of my family home. I’m sure that’s true for plenty of Irish women and men of my generation, but it’s quite a novelty among my peers where I live now, in suburban southeast London. Of course, there might well be locals even here who could say the same, but my social circle these days is almost entirely made up of fellow blow-ins, setting down fresh roots far from our home places.

My London-born wife, also a writer, always encouraged me to work on something about the world and the times I was raised in, but for a long time I didn’t feel those stories were mine to tell. Through my childhood, the conflict was mostly something that happened on the news, a good way off in Belfast or Derry, or in villages and townlands I’d never visited, even though some were only a dozen miles away. In the end, my first novel The Countenance Divine was set almost entirely in London, and didn’t have a single Irish character.

But when it came time to start another, I finally took my wife’s good counsel. I began a book grounded in my own memories and my own angst, about someone like me returning home to make sense of what made no sense at the time. I threw months and months at it, wrote tens of thousands of words. And I got nowhere. Plenty of decent material, but I just couldn’t make a novel out of it. No shape, no centre.

I decided I was dodging the real story, the one that was everywhere and nowhere around me as I grew from boy to man: the conflict itself, and those who took part in it. I only got a hold of it in the end when I dared myself to lean on a classical epic, borrowing a structure and characters that let me write my way inside the violence, a life I know nothing about at first hand. I trusted this ancient story to guide me through territory I’d hardly dared think about before. At last, something clicked. I had my novel.

The result is a very long way from the sprawling family epic I first planned. But as it turns out, that’s just as well. Going through his things after he died, we came across my father’s birth certificate. To our astonishment, it gave the date as one day earlier, December 22nd, 1920. Nobody could say where the confusion started, or whether he was even aware of it. But it leaves me now with the inkling that if my father does deserve a place in history, it has a very different resonance. Rather than the first baby born in the new Northern Ireland, I let myself imagine he might have been the last one born on an island without a border.