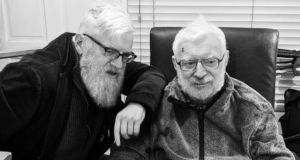 The last memory I have of my paternal grandfather – Grandy, we called him – was of him in the backseat of my father’s Morris Oxford. Grandy was banging on the window with his unlit pipe, begging to be let out. As the car was pulling out of our driveway, the family stood on the doorstep and just watched. My father drove him to St John of God’s , where, soon after, he died. Late stage dementia, dead at 78.

A more pleasant memory of Grandy, from a short time before his traumatising exit, was of him standing outside his Phibsborough house responding to my inquiry about the time of day. Grandy withdrew his pocket watch – a gift on his retirement from CIÉ – and, peering down at it, after a moment said: “According to my watch it’s now three and sixpence.”

These tales are ceaseless, and like an outburst from a long-dammed glacial lake he is a flood of stories

This wasn’t the first time I’d asked that question but it was always three and sixpence in Phibsborough. Looking back, I realise now that this routine of ours may have expressed a stage in his decline. But this is not the way I choose to understand this memory. A small, nonsensical exchange with a grandson seemed to be very much his thing.

Is it not often the case that a person’s declining years can clarify their essence? Grandy was sociable, and a po-faced teller of small stories. He once told me he saw a “wee man” out in the Slieve Mish Mountains. He was bending over to tie his shoe. The little fellow stood beside the rock where Grandy bent down and he peered up at him. Neither of them spoke, and when the shoe was tied they strolled off in opposite directions. No mention of gold from Grandy.

My father is very much alive. However, it may be fair to assess that at 91 and recovering as he is from a slight stroke that has restricted his mobility and punished his short-term memory, he may very well be in his last decade or so. Three tops. If old age and declining health can clarify a person’s essence, what then of my father’s essence? My father is a composite of flesh and story.

In recent months, it’s fair to say that he is less flesh, and more story. These tales are ceaseless, and like an outburst from a long-dammed glacial lake he is a flood of stories, some of them containing very ancient sediment.

After his stroke my father’s memory of every Gaelic football fixture of the 1930s, 1940s and 1950s remains pristine. More interesting, to me at least, are stories of his childhood. He told me this one recently.

When my father was six, in 1933, the family moved to Dublin from Tralee. Grandy had worked in the district inspector’s office of the Great Southern Railways Company in Tralee and was transferred to Kingsbridge Station (now Heuston Station). The family lived in Great Western Square in Phibsborough.

The cow was now about to calf. Could my father help him?

During his decline, Grandy reverted to speaking only in Irish – his first tongue – but since my grandmother had little Irish, the family spoke English at home. Although Grandy had retired the language, he was a traditional man of his times in most ways and was a religious man. The story floats around the family that because of Grandy’s involvements in the revolutionary politics of Kerry in the late 1910s and 1920s, he cultivated a special devotion to first Friday Masses. A salve for his troubled conscience. Although he was determined that his children would get the best possible education and the family was bookish, nonetheless he was a censorious man, who feared that his boys would stray into inappropriate material. He would patrol his children’s reading and confiscate suspicious titles.

When my father was 10 or so, he acquired a book on the life cycle of the frog. He can’t recall from whom he got it. When Grandy flicked through it, he realised that the volume provided unseemly details about amphibian sex life, and promptly removed it from my father.

A few nights later, my father was returning to Phibsborough from the inner city. As he reached Phibsborough Road, he was called over to the entrance of a shed by a distraught man. The man needed immediate assistance. Apparently, this neighbour had acquired a cow, which he was hoping to resell for its meat. He was unaware that the animal was pregnant. The cow was now about to calf. Could my father help him?

My father would not, of course, have had much experience in veterinary affairs. It seems unlikely that his knowledge of frog reproduction could have helped either. Nevertheless, my father described how between the neighbour and himself they delivered the calf. Afterwards, my father continued along his way. Arriving home, he elected not to tell his father about it, fearing that he would disapprove after the episode over the saucy frog book. My dad pulling the calf by its legs from its mother’s womb seemed like more than Grandy could handle.

This my father did for me: he led me around the wild places of Ireland (especially in Kerry) and he told me stories. Many stories; some dramatic, some not, some with endings, and others that trailed off without any conclusion other than the beginning of the next story. He was the main storyteller in our family. Of my mother, I can say, as my father said of his, “she may not be a great storyteller, but great stories are told of her.” When we were very young – there are six kids in all in the family – my father was the chief reader of bedtime stories and teller of tales. Several of them are entertaining and most of them worth hearing the innumerable times they’ve been retold.

Over the past couple of years I have reread, and written about, many of the classic stories Dad read to me; many of these are the same ones that I then read to my children. What I’ve realised from this extravagant and nostalgic reading project is that a sensitive narrator not only distracts us from life’s mischiefs but also can propel us out the door prepared to love the world.

In the book I wrote on this topic, Beasts at Bedtime: Revealing the Environmental Wisdom in Children’s Literature (University of Chicago Press), I record my indebtedness to my father’s commitment to our reading. We had many books in the house, my mother being a great reader as well. That being said, like his father before him, my father was an amalgam of liberal inclinations and censoriousness, though the latter was expressed in a minor key. During my teens, for example, I cultivated a taste for Stephen King novels. Seeing my copy of The Shining (1977) – the only novel that I have thrown across a room, just to put some distance between it and me – my dad picked it up to inspect it. “Please don’t read the first sentence,” I said to myself. He did: “Jack Torrance thought: Officious little prick.” With that the book was gone. (Years later I found it in the attic, looking conspicuously well read.)

Consistent with this prurience about reading material was my father’s reticence about the facts of life. I have always harboured mild regrets about this negligence of his. Since, to my knowledge at least, no calves were born in the sheds of Templeogue village when I was growing up there, this particular tutorial on matters reproductive was not available to me. That being said – and this epiphany only occurred to me after hearing my father’s recent deluge of stories – when I was about 10 my father gifted me an important book intended to remedy this gap in my education. So important was the gift that I mention it in my recent book as the first truly scientific text I ever owned. It was a short book on the life cycle of the frog.

There are those who regard storytelling as a utility – read to children about animals to cultivate empathy, read to them about frogs . . . and so on – and those who care for stories as curlicues, merely as pleasant distractions from the many duresses of life. The distinction may not be important, as it’s hard to imagine a good story that does not eventually impress itself upon our lived circumstances in some ways. What I have found is that stories my father has told me matter in ways that can take me years to realise.