Can a list of someone’s stuff double as literature?

Our possessions are revealing, especially when it comes to our fantasies about ourselves – and they invariably reveal more than we intend 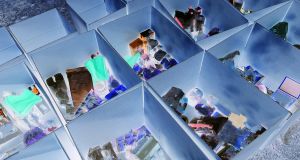 For three years, the French writer Thomas Clerc cloistered himself in his 50sq m Parisian apartment, compiling an annotation of his possessions, including some 700 books, two old pornographic magazines, one electric kettle and one small spider who had taken up residence in his living room.

The project became a book — a “poetics of property,” a room-by-room tour of his home, published in France in 2013.

The French word for peephole, Clerc writes, is judas. But, he assures, “the only secrets I’ll betray are my own.”

Clerc is an experimental writer much inspired by conceptual art. In a previous book, he walked along every street in the 10th Arrondissement of Paris, his neighborhood, documenting everything he noticed for a period of three years. He has never worn his influences lightly; this latest book, Interior, which has been translated into English, is a messy mashup of Roland Barthes, Georges Perec, Joris-Karl Huysmans. It’s fusty and pretentious but also haunting, a book of ghosts and a book of this moment.

In recent years, a new brand of personal writing has flourished on the internet, of deflected memoirs: food diaries, beauty routines, 10 items a public figure “can’t live without.” These are lives told through objects, through stories of consumption. In US magazines, celebrities share “what’s in my bag”; in a new series for The Paris Review, writers reveal the contents of their fridges.

This kind of storytelling is cropping up in literature, too. I noticed it first in Important Artifacts and Personal Property From the Collection of Lenore Doolan and Harold Morris, Including Books, Street Fashion, and Jewelry, in which Leanne Shapton charts the arc of a fictional relationship through the form of an auction catalog. It’s in The Folded Clock, by Heidi Julavits (who sometimes collaborates with Shapton), a diary partly organised around the recurrence of talismanic objects. Karl Ove Knausgaard’s recent cycle of books inspired by the seasons is largely broken into short essays on his relationship with natural phenomena and other objects, from head lice to bubble gum.

You can see the appeal. Our possessions are revealing, especially when it comes to our fantasies about ourselves (they also invariably reveal more than we intend). And with more and more of our lives spent online, how reassuring it feels to tether ourselves again to the world, to the solidity and bluntness of objects.

What’s curious is how often full-length books inspired by objects offer many of the same pleasures as shorter lists — often written in bite-size pieces, they’re easy to consume; they’re very much taken with questions of taste and they invite a glancing intimacy.

Interior is, very grandly, none of these things. It is a work of committed, almost magnificent tedium. I had to bully and bribe myself across the finish line. I suspect Clerc did, too: “I’d never have undertaken this massive documentation of myself if I weren’t convinced that archives, like capital L Literature, tell the truth.”

Great collectors are often great proselytizers for their obsessions — think of Barthes, Walter Benjamin, Wayne Koestenbaum, the photographer Sara Cwynar, some of whom feel present in this book. But Clerc cannot transmit his enthusiasm to us.

The narrator comes across as calm, morose — and inexplicably reluctant. He cannot riff, he cannot persuade us of his “lust for possessions”. The fetishism feels fake, forced. “I’d like not only to give my readers a guided tour of the museum-of-sorts that I consider my apartment, but also to make them rub their fingers over every inch of it,” Clerc writes. How much more effective to kindle our desire, to make us want to touch, to rummage and snoop.

The stolid descriptions, the allergy to suspense and any real storytelling, feels all the more strange given that the references in the book run almost exclusively to twisty mysteries – to Hitchcock, Columbo, the board game Clue.

But some of my irritation, I learned, was misplaced. At one point – the only real moment of action in the book, in fact – a chandelier becomes loosened from the ceiling, falls to the ground and shatters. Clerc is reminded of a scene in Hitchcock’s final film, Family Plot, in which a burglar hides a diamond among the crystals of a chandelier.

Interior similarly conceals its treasure. There is a hint buried among all the items we are forced to consider – the holey socks, the old postcards, a taxidermied squirrel “reclining like a Roman on a couch”.

There are only two works of art in Clerc’s apartment. Both, he tells us, are photographs of his friend, the writer Édouard Levé, who died in 2007. A short 10 days after submitting the manuscript of a novel called Suicide, Levé killed himself.

His ghost presides over Clerc’s project. Confronting the chaos of his kitchen cabinets, Clerc remembers the hero of Balzac’s novel La Peau de Chagrin, who takes shelter in an antiques shop and decides not to kill himself. “Isn’t it pretty,” Clerc writes, “to think that such a jumble of things might keep a hopeless man alive merely by liberating and intensifying the appeal of existence?” It’s a moving turn in a book that is finally not about the exultation of possession, but the futility.

Interior, by Thomas Clerc, translated from the French by Jeffrey Zuckerman, will be published in the UK in August by Farrar, Straus & Giroux