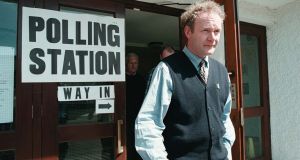 “I fought, I made peace, I made politics.” A year on from the death of the former IRA leader who became Northern Ireland’s deputy first minister, Bill Clinton’s eulogy is one of 28 reflections from politicians, journalists and others on the Martin McGuinness they knew. Some are expected – Gerry Adams, Mary Lou McDonald – others, such as Ian Paisley’s widow Eileen, or the former leader of the Progressive Unionist Party, Dawn Purvis, are less so, and it is to Collins’s credit that he has sought out a wide range of contributors.

Perhaps most interesting are the words of those knew McGuinness first as a friend and neighbour – fellow Derry man Mitchel McLaughlin, who played football with him as a child, and Denis Bradley, who says of McGuinness: “His was the first voice that I knew which made any difference”. Ironically, former newspaper editor Pat McArt recalls how he had a longstanding agreement to write McGuinness’ biography. While this volume provides some welcome insights, the reader will inevitably wonder about the stories that will never be told. Freya McClements

The Wisdom of Frugality: Why Less is More – More or Less
By Emrys Westacott
Princeton University Press; £16.99; 328pp

Upon closing the pages of this very enjoyable book, I felt only pleasure and enlightenment from a thoughtful and flowing examination of an idea that’s always snared our imaginations – if the good life is a simple life, why have we not embraced it more, especially in an age of materialistic ambition?

Emrys Westacott, professor of philosophy at Alfred University in New York, carefully places the teachings of great thinkers on the association of happiness and a frugal life in the pressure cooker of reality to see which ideas spring back after some prodding, and which of those burst into hot air.

Reading this book, it occurred to me that there is a paradox in how we label today’s society as individualistic, when we could also easily apply something penned by Marcus Aurelius (AD 121-180): “We all love ourselves more than other people, but care more about their opinion than our own.” Modern and classical thought merge more than we recognise sometimes, and this title is a fine representation of such ideas. NJ McGarrigle

The Unexpected Truth About Animals
By Lucy Cooke
Black Swan, £8.99

We misunderstand animals badly because we view them “through the prism of our own, rather narrow existence”. Here we meet “a cast of idiosyncratic obsessives”: scientists who, throughout the centuries, have misrepresented animals mainly by anthropomorphising them. Lucy Cooke demolishes many of the myths that have built up. Her “menagerie of the misunderstood” comprises the bat, beaver, chimpanzee, eel, frog, hippopotamus, hyena, moose, panda, penguin, sloth, stork and vulture. The sloth, described as a “paragon of low-energy living” and a “quiet vegetarian pacifist” is Cooke’s particular favourite.

Far from being lazy evolutionary failures that sleep all the time, they’re one of the most successful tropical mammals and sleep 9½ hours a day. Pandas, far from being helpless, sex-shy bears needing our help to survive, are strong and virile (having sex up to 40 times in an afternoon) with a penchant for group sex. Knowledgeable, humorous and informed by a deep love of animals, zoologist Cooke take us on a literary, historical and scientific tour de force of her chosen, much-maligned creatures. Brian Maye

If you’re struggling, find consolation from an unlikely source: the samurai