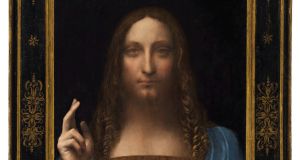 A detail from Salvator Mundi, an ethereal portrait of Jesus Christ which dates to about 1500, and is said to be the last privately owned Leonardo da Vinci painting. Photograph: Courtesy of Christie’s New York

Despite the pre-sale publicity, Salvator Mundi does not have the kind of history that would reassure you about its status and authenticity, especially if you were planning to spend the better part of half a billion dollars on it.

For starters, it is one of more than 20 versions of the painting in circulation. About 150 years after it’s provisional date of creation, 1500, this version was in the collection of King Charles I in England, but was sold on. Then there’s a blank, filled by speculation, for almost 150 years until, having undergone extensive and possibly damaging restoration and repair, it was acquired by a British art dealer. It fetched just £45 at Sotheby’s in 1958 (when it was attributed to Giovanni Boltraffio) and disappeared off the radar again until a three-member consortium of art dealers bought it in Louisiana in 2005.

By then it had been crudely over-painted, and the consortium embarked on a restoration programme and, more importantly, after an initial two years of conservation work, set out to have it authenticated. They were successful: surprisingly, it received the official imprimatur of being included in the blockbuster Leonardo show at the National Gallery London in 2011. Russian billionaire Dmitry Rybolovlev purchased it for $127.5 million in 2013. In the meantime it became caught up in a complex legal dispute involving Rybolovlev and the controversial Swiss art dealer Yves Bouvier.

With a plausible claim to be the only Leonardo – here are fewer than 20 known to exist – in private hands, the stage was set for Christie’s to manage its sale. Which it did incredibly effectively, although in a way that seemed more showbiz than auction room, more Dan Brown then Kenneth Clark, including a publicity campaign of unprecedented proportions, marketing the painting as “The Last da Vinci”. The intended audience wasn’t so much public or scholarly opinion as mega-wealthy individuals looking for a prestige purchase, but throughout Christie’s was poised to counter any suggestion that Salvator Mundi was not what it purported to be.

And there are doubters. The grounds for scepticism include: the paucity of documentary evidence that Leonardo actually painted such a subject (in other words, questioning the very existence of an original by Leonardo); the argument that he would not have allowed the optical shortcomings in the depiction of the crystal globe in Christ’s hand (he wanted it to seem miraculous is the lame riposte); and the question of why da Vinci opted for a tightly cropped, flat, frontal, rather inert, icon-like view of the figure.

Experts on the side of its authenticity tend to focus on technical details, and their endorsement is not necessarily as clear-cut as it might appear. Some argue that Leonardo’s hand is evident in parts of the painting, but not the overall composition. After much ill treatment, Salvator Mundi is a sad, massively repaired object. But most importantly, perhaps, it does not really look the part. As art historian Charles Hope wrote in 2012: It’s “a curiously unimpressive composition and it is hard to believe that Leonardo himself was responsible for anything so dull”.