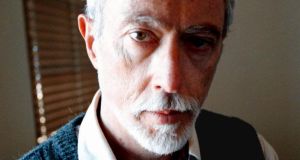 JM Coetzee: in Age of Iron Coetzee’s prose is cold and precise. No glimmer of hope. Photograph: Reuters

Cape Town in the late 1980s. Gugulethu township is on fire, school children in the vanguard. Dies irae.

Elizabeth Cullen, a retired university lecturer, is dying. She is in agony. She writes a last letter to her daughter in the United States. She will not ask her to come back. Her daughter has made a vow: she will return when the leaders of apartheid “are hanging by their heels from the lamp-posts”.

A man, Vercueil, is living in the alley next to Elizabeth’s house. A drunk, a vagrant, stinking. An uneasy relationship develops between the two. As Elizabeth weakens, as death comes closer, he, too, comes closer.

The violence of the township enters Elizabeth’s life. Bheki, son of Florence, Elizabeth’s maid, has been shot. “He still wore the grey flannel trousers, white shirt and maroon pullover of his school, but his feet were bare.” His friend John takes refuge with Elizabeth. The police shoot him too.

“ ‘These are good children,’ says Florence, ‘they are like iron, we are proud of them.’ ” The age of iron, writes Elizabeth. Given birth to by the age of granite. The Voortrekkers, “generation after generation . . . grim-faced, tight-lipped Afrikaner children, marching . . . saluting their flag, vowing to die for their fatherland.” How long she asks, before “softer ages return in their cycle, the age of clay, the age of earth?”

As Elizabeth sinks further into pain, Vercueil, the dispossessed, becomes the centre of her shrinking world. Coetzee describes them in intimate detail. “We share a bed, folded one upon the other like a page folded in two . . . His toenails . . . yellow, almost brown, like horn”.

If you’re struggling, find consolation from an unlikely source: the samurai