Move over, Richard and Judy. Meet Rick and Sinéad 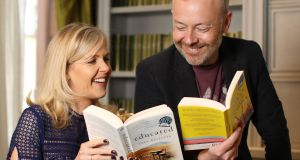 From Oprah in the United States to Richard and Judy in Britain, celebrity endorsements have proven influential in driving sales and raising the profiles of individual authors. Today Eason, Ireland’s leading bookseller, launches its version, Sinéad and Rick’s Must Reads with bestselling novelist Sinéad Moriarty and book enthusiast Rick O’Shea. The duo have been recruited by the chain to give customers authentic reviews of new and upcoming books.

Moriarty and O’Shea will recommend eight titles each season from a list of new and upcoming releases – from fiction to nonfiction, Irish authors and beyond. They explain the thinking behind the campaign.

Sinéad Moriarty
Books are my life. Reading and writing are what I do, all day, every day. I read for pleasure and I write for a living. I grew up in a house that had shelves groaning under the weight of books. Both of my parents were voracious readers and they passed on that precious gift to me.

I am so thrilled to now be able to recommend books to other readers. What an absolute joy it is to read a book, fall in love with it, and then persuade others to read it too. Word of mouth recommendations are still incredibly powerful in the world of books.

Eason is so supportive of all writers. They have been incredibly supportive to me since my first novel was published 15 years ago. I am delighted to now be working with them to promote other people’s work, and to get books that I love into the hands of other readers.

Spending time with a good book is the absolute best way to while away an hour or two. With social media, Netflix and smartphones constantly pinging and calling for your attention, there is nothing calmer or more peaceful than to sink into a chair with a great story.

I feel passionately about my four spring choices. Each book stayed with me and moved me in different ways. Each of the four books are ones I will be pushing into the hands of my own family and friends.

I’ve chosen two fiction and two nonfiction books. Two are set in America, one in Dublin and one in Korea. Educated is a book I have been waxing lyrical about since I read it at Christmas. Tara Westover’s sheer will to overcome her painful childhood and make something of herself blew me away. I also fell in love with Julia Kelly’s achingly beautiful novel about love, loss and Alzheimer’s – Matchstick Man.

White Chrysanthemum transported me back to 1943, Korea and a shameful chapter in history. Having a sister myself, I found the story of these two sisters separated so brutally by war, incredibly moving.

Little Fires Everywhere is a total page turner. It’s a charming and engaging novel about class and privilege, but mostly it’s about motherhood in all its forms – biological mothers, mothers who have adopted and surrogate mothers. Celeste Ng creates characters you really care about and become invested in.

I am currently knee deep in books for the summer selection. I’ve only found one definite so far, but I’m thoroughly enjoying reading the boxes of books from Eason that arrive to my house on a regular basis. Receiving a box of recently published books is like Christmas day to me. Who could ask for more?

Rick O’Shea
The last few months have been excruciating, and I don’t use that word lightly. You see I’m not great at the best of times when it comes to keeping my own secrets, even the small ones. This is one of the biggest ones I’ve ever had. Genuinely, on the day before launch as I write this, it feels like it’s Christmas Eve and I’m roughly 10 years old. I’m actually fidgety with excitement to see what happens when a project that Sinead and I have put so much thought, love and effort in to since January gets released into the big, bad world.

Actually, I’ve spent time over the last few months wondering what 10-year- old me would make of all this. When I was a kid my grandparents brought me into the O’Connell Street branch of Eason, regular as clockwork every Saturday lunchtime and let me off in the kids section and, later, the comic books. When it came to summer holidays in the caravan in Wexford, a whole afternoon would be needed to stash up on Famous Five, Secret Seven, Three Investigators, Arthur C Clarke, Douglas Adams or whatever was flavour of the month with me as time moved on. If 10-year-old me thought that these days, books that his ancient (!) older self had picked would be stickered and promoted on big tables in that very store and on the internet I don’t think he’d know what to do with that sort of information. He’d have no idea what the internet was for a start.

Picking the list was no easy task but I got there in the end – there are so many incredible books out in the last few months. We’re both working towards a spread of fiction and nonfiction, Irish and international, mainstream and slightly less well known. Even just looking at the first bunch we have books with grumpy Irish hoarders, intense modern love affairs and Korean family sagas as well as true stories of growing up off the grid, almost drinking yourself to death and cows! Hopefully too we’ll be putting books that might not otherwise get such public love right in your line of sights when you enter the shops.

This is just the start as well, we’ll have three more lists coming out between now and the end of 2018 and that means I’m reading, genuinely, more furiously than I ever have in my life. I’m on book 31 of the year so far. But you couldn’t call any of this work; I’m not exactly breaking rocks here. It’s just that someone has taken probably my biggest hobby and the one I’m most passionate about and given me one half of a very, very big megaphone. If readers find even two or three books over the year that they end up loving it will all have been worth the work.

Spring titles
Educated by Tara Westover: An extraordinary and inspirational memoir of a girl who had no birth certificate or education, yet who through sheer grit and determination ended up with a PhD from Cambridge.

Little Fires Everywhere by Celeste Ng: A riveting and powerful novel about two very different families whose lives become intertwined in a way that will change them forever.

White Chrysanthemum by Mary Lynn Bracht: Bracht explores one of history’s most shameful chapters in this moving and heart-breaking tale of two Korean sisters separated by war and brutality.

Matchstick Man by Julia Kelly: An intensely honest memoir in which novelist Julia Kelly writes about her partner’s disintegration into a world of confusion as Alzheimer’s takes control of his once sharp and brilliant mind. (April 24th)

The Unexpected Joy of Being Sober by Catherine Gray: An unflinching and questioning look at the role that alcohol plays in our everyday lives, and which considers how much more improved our lives can be when we give it up.

The Cow Book by John Connell: A moving and beautiful portrayal of just how hard everyday farming life can be from writer John Connell, who unexpectedly found himself back on the family farm a year after emigrating to Australia.

Conversations With Friends by Sally Rooney: One of the most talked about debuts in years, this unmissable novel is about two college friends whose relationship is tested when one of them embarks on an affair with an older man.

The Hoarder by Jess Kidd: The author of the acclaimed Himself returns with a touching new novel about an Olympic-level hoarder, and the poorly-paid care worker who is sent in to try to convince him he needs help.