Waking the women writers: Lucy Caldwell on The Long Gaze Back

Maybe a story about babies and motherhood was the last thing you should submit for a women writers’ anthology. Was I defying the buggy in the hallway, or succumbing to it? 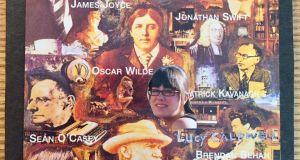 The card Lucy Caldwell’s sisters made for her, adding her to the all-male Irish writers’ poster

When Sinéad Gleeson emailed me in the spring of 2014, asking if I’d contribute a story to an anthology of Irish women writers, I was heavily pregnant with my first baby and didn’t know if I’d be able to write anything in time – or indeed ever again. But I did know, instantly, that I desperately wanted to be part of it.

We had met the previous year, at another anthology launch, and gone for dinner and drinks afterwards, a perfect, balmy June evening, during which we discussed a brilliant and startling debut by an unknown writer, whom Sinéad was reading in proof, convinced she would be massive, and the lack of plays by women playwrights at the Abbey Theatre. This was a full year before Eimear McBride went on to scoop several major awards for A Girl is a Half-Formed Thing, and two before the Waking the Feminists movement kicked off, but these things were somehow already in the ether.

I’d grown up as one of three sisters, attended all-girls’ schools all my life.

And yet: it only took one or two plays to start hearing from actors that it was unusual to have plays with female casts; that there weren’t enough roles for older women, or for many women at all that weren’t predicated on their relationships to men. It started to vex me how much of the political, religious and cultural discourse of Northern Ireland was and has been dominated by men; the extent to which we’re missing women’s voices, women’s stories. I had begun putting together the stories for what would become my first collection, Multitudes – stories entirely about or narrated by girls and young women, stories it had taken me 10 years of writing and publishing to have the courage to tell.

I had been gazing anew at the card my sisters made me when my first novel was published, a card which has been pinned to the noticeboard of every room (or corner of a room) I’ve worked in since. It is that famous poster of Ireland’s Writers, done in the same style as Pub Doors of Ireland, or Irish Cottages. James Joyce and Seán O’Casey, Beckett, Yeats, Synge. They found a suitably serious-looking mugshot of me, cut it out and stuck it about two-thirds of the way down, just below Oscar Wilde’s shoulder, my name Tippexed in, and we all laughed.

It took me years to realise the great writers who were missing. Edna O’Brien and Kate O’Brien, Elizabeth Bowen, Mary Lavin and Maeve Brennan and Norah Hoult. Maria Edgeworth and Jennifer Johnston and Lady Gregory and Frances Molloy. Anne Enright, Anne Devlin, Evelyn Conlon. The list, the litany, goes on.

To miss or turn down the chance to be published alongside them was unthinkable.

I remember very little, now, of the writing of Multitudes, which was published in The Long Gaze Back and became the title story of my own collection. I know I wrote it in bursts on my iPhone, tapping it out with one thumb as I nursed my newborn in the depths of the night. I wrote it with my laptop balanced on a stack of baby books on the kitchen table, as I joggled him in a sling. I wrote it with a focus and intensity I’d not known before, because it felt in many ways like writing for survival. I finished it by the time he was eight weeks old – I know this only because I have just checked the date I emailed it to my editor, and to Sinéad.

I had qualms. Maybe a story about babies and new motherhood was the last thing you should submit for an anthology of women writers. Was I defying the buggy in the hallway, or succumbing to it? Either way, it was the only thing I was capable of writing.

It was an honour to be published in The Long Gaze Back. What I wasn’t prepared for was just how emotional it felt. My story, about a gravely ill newborn, was suddenly in direct conversation with Maeve Brennan’s The Eldest Child, about a woman keeping vigil for the soul of her firstborn son, in conversation too with Eimear McBride’s Through the Wall, about maternal ambivalence.

An anthology, carefully curated, becomes more than the sum of its parts. The stories chatter, argue, augment and contradict each other, connect across the centuries. As a writer, you make your own genealogies, seeking out writers who speak to you across the years and oceans. But there is something very special about seeing yourself in the company of compatriots.

The readings and panel discussions that took place around the launch of the The Long Gaze Back felt a-quiver with an energy I hadn’t felt before. After one particular event at the Lyric Theatre, four Northern women side-by-side, we all agreed: we needed another anthology.

Fast-forward a year, and Sinéad had been persuaded (although that term may be something of a euphemism) to edit what would become The Glass Shore. That’s a whole other story, or rather, 25 of them.

When I look at the anthologies now, side by side on my bookshelf, this is what I think. As a young writer, you are driven half-demented by that bitchy quote by Gore Vidal; or, as the current Irish Laureate puts it, he suspects the young Sebastian Barry would have poisoned the soup of a roomful of his contemporaries if he could. But mercifully, over the years, you learn that it’s not true at all: in fact, it’s the opposite. One person’s success lifts us all. Two, three people’s success starts to bring attention to us all. You learn from each other. You see the approach that another writer has taken, in subject or style, and you benefit from that, taking it, building on it. The higher the bar is set, the more you find yourself raising your game. You are only ever in competition with yourself, but there is a great solidarity in sisterhood.

Both anthologies seem part of something bigger that’s happening at the moment, channelling, like lightning rods, something of Waking the Feminists, Women Aloud, #MeToo, #IBelieveHer, #Repealthe8th, all of the conversations we’re having about women’s voices, women’s bodies, women’s stories, women’s autonomy. Change is in the air: and they are both a valediction and a celebration of where we’ve come from and where we’re going.