The mother finds that as a woman alone in society, people want not so much to help her as to control her 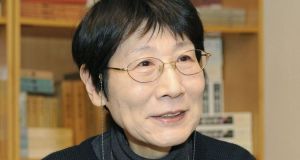 One way to realistically depict the months and years passing in a novel is to publish it in real time. That is what Yuko Tsushima did with this book, released in monthly instalments in the Japanese literary magazine Gunzo in 1978-79 and now translated into English for the first time.

This was hardly a new idea, though Tsushima’s slim story is as far removed from the sensational Victorian triple-decker as can be. Instead it reflects, like a crystal, scattered moments in the life of an unnamed mother trying to make a new life in Tokyo with her daughter after separation.

The territory of light in the title is an apartment that the mother moves into with her two-year-old girl to begin their new life. It’s on the fourth floor of an old office building, and so filled with light that “entering from the dimness of the stairwell, you practically had to squint”.

Initially she feels pleased “for having managed to protect my daughter from the upheaval around her with the quantity of light”. But she can’t protect herself from the loneliness of life as a single parent, navigating work and neighbour disputes and divorce mediation without help.

Each chapter describes a discrete episode in the lives of mother and girl, often titled with a haiku-like awareness of nature: “Sunday in the Trees”, “A Dream of Birds”. But there is a stark contrast between the gentle titles and the reality of urban life described. In “The Water’s Edge”, for example, she finds herself dreaming of rain, only to be disturbed by tenants downstairs complaining about dripping water. Yet the humdrum reality is subverted again when they go to the roof and find that the building’s water tower has sprung a leak, creating “a great expanse of clear water” rippling and sparkling like a new world. “Mommy, it’s the sea! Wow! Look how big it is!” cries her daughter.

The mother finds that as a woman alone in society, people want not so much to help her as to control her. Neighbours arrange to have mesh placed over her windows to stop her daughter from throwing things out (“The decision doesn’t involve you. All you have to do is get used to it”). Acquaintances approach her to counsel against divorce (“Every woman thinks it’s going to be different for her, but she ends up at the bottom of the heap all the same”). An estate agent tries to persuade her to rent an apartment that was the location of a murder-suicide (“Gas, so it’s not as if it left traces”).

Tsushima said that she wrote only of what she had experienced

Control is something the woman herself struggles to exert. If she’s not getting it wrong – such as when she leaves her daughter asleep in the apartment alone, while she goes out for the night to try to bring back “those carefree, lively times” before her separation – she finds control slipping away altogether, as lurid dreams creep into her reality and she can no longer remember who instigated her separation. In the later chapters of the story, she becomes more isolated still, and begins to withdraw from the rest of the world. “No one else must know about this place that made me yearn to dissolve until I became a particle of light myself.”

Tsushima’s telling of the story enhances this feeling of detachment, telescoping years into a sentence, or practising odd elisions such as the depiction of the woman’s boss Kobayashi. In one chapter he is suspiciously over-familiar, yet later he is referred to in passing as having been hospitalised with cirrhosis of the liver and a new boss is installed. That way of lopping off a subplot is unorthodox in fiction but, of course, quite normal in real life.

Tsushima said that she wrote only of what she had experienced – she too was a divorced mother – and that she got the “horrible idea of becoming a novelist” after vowing to give up writing if she didn’t win an essay competition in her college. She came first, and by the evidence of this bracing, often breathtaking book – with much more of her work yet to be translated into English – we should be glad that she did.