Mark the 30th anniversary of Thomas Bernhard’s death with Concrete

Short reviews: Bangkok Wakes to Rain is a symphony of a novel; No More Boats offers an in-depth exploration of what it means to belong 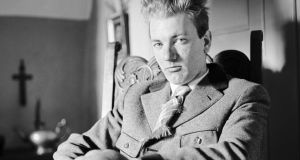 Thomas Bernhard: Anyone reading the Austrian for the first time will likely develop a sweet and sour taste towards his talent

Thomas Bernhard
Faber & Faber, £9.99
Faber & Faber is reissuing five novels this year to mark the 30th anniversary of Thomas Bernhard’s death. Anyone reading the Austrian for the first time will likely develop a sweet and sour taste towards his talent after swallowing this slight book. There is little in the way of plot or character; instead we have a monologue from wealthy, whining, would-be musicologist Rudolf and his struggles to complete his magnum opus (but for the world distracting him!). Rudolf’s mind is like a set of swinging doors in describing his life - he talks himself into action as quickly as he talk himself against it - and the reader goes along to see how unhinged things might become. Concrete will have you on nodding terms with Beckett, Kafka and Dostoevsky’s Notes from Underground, and some dark humour can be found in the slabs of text from Rudolf’s fatalistic riffing. But, after a clumsy new narrative strand is stitched in towards the end to push events over the finish line, spending time in such a pitiful character’s company leaves the reader feeling unsatisfied and unsympathetic.
NJ McGarrigle

Pitchaya Sudbanthad
Sceptre £16.99
Leading us through myriad alleyways of time and space, Bangkok Wakes to Rain is a symphony of a novel, incorporating a multitude of perspectives and eras of the city, yet with subtle themes that reverberate throughout: a musician plays during the Vietnam war, summoning ghosts; a plastic surgeon gives a girl a new face in the distant future; a missionary-doctor in the 19th century finds himself adrift in a culture he can’t comprehend; a student lies bleeding to death amid 20th century political protests.

The novel asks what it means to face the unforgivable, how we live with guilt and struggle with redemption whilst examining concepts of belonging and duty. In its scope, the book has much in common with David Mitchell’s Cloud Atlas, inhabiting both futuristic scenarios and an evocative past, mixing dystopia with history. In its fragmentary epiphanies, it carries echoes of Colum McCann’s Let the Great World Spin, combining vastness and intimacy-that sense of time being both unfathomable, yet condensed to precious moments: “Even the most glorious day should carry on only so long.”

Felicity Castagna
Europa Editions, €18
No More Boats chronicles a period of time bookended by two recent and seminal historical events, namely the Tampa Crisis in Australia in August 2001 and the 9/11 attacks on the World Trade Centre in New York. Told using four narrative perspectives, the novel takes place in the Sydney suburb of Parramatta, a site where cultural, linguistic, national and generational experiences intersect.

Felicity Castagna’s voice is honest and uncompromising and her novel brings a focused and unflinching gaze to bear on life in contemporary Australia, engaging consistently and candidly with the country’s complex relationship with its past. Her style encourages the reader to invest in and focalise events through her characters, which are written with a humanity that is endlessly relatable. Using the intricate relationships these characters operate within, No More Boats offers even the casual reader an in-depth exploration of what it means to belong, in a universal as well as a national sense, and an intelligent discussion of what home can mean in the context of the immigrant experience.