‘Writing a first novel is like wandering out into an unclear, inhospitable landscape’

Adrian Duncan writes about getting his novel to print, rejection and writing courses 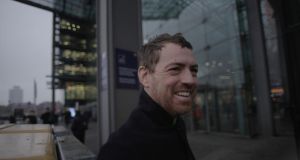 Adrian Duncan: ”I had all but given up on the project. I’d sent it to four more publishers and a few agents. The publishers turned it down and the agents had gone silent”

In September 2008, I left my job as a structural engineer to return to university to study fine art. I had also begun creative writing classes at the Irish Writers Centre under the Texan novelist, Greg Baxter, a then unpublished author and a complete unknown to me.

His classes consisted of reading and discussing the work of great writers. We’d submit writing and a week later we’d receive our text back, decimated with strikethroughs, edits, suggestions; and at the end of each exercise there was always a substantial note of criticism and encouragement. I ended up doing three 10-week classes in short form fiction and nonfiction. It exposed me to writers I’d not heard of before. My reading up till then consisted of some classics and whatever had been given good reviews in the broadsheets. I don’t remember Greg giving much by way of general advice throughout this time, other than that he insisted whatever we submitted was in no way to be planned out or plotted ahead. The openended-ness at the heart of this request at first sat uneasily with me. My habits of thought up till then had been, naturally enough, predominantly deductive.

Also during this time, at art college, I became particularly interested in sculpture. My understanding of material while I was an engineer was abstract and mathematical. When I began working in sculpture, I got to know material through my hands, and this had the effect of bringing me closer to the world. This formative period as a writer and an artist happened at the same time and as such I don’t distinguish much between them.

The role of a good literary publisher, I think, is not only to publish good writing, but to take seriously the rejection of promising writing

After I’d completed the writing courses, the recession was taking hold. By this time I was writing passable essays, but struggled to produce a short story of any merit. I took part in a course called Russian Short Stories, and over the subsequent months my sense of what a short story could be cracked open. The short story in Ireland has a vaunted position in the cultural imagination. It is, of course, justified, but it had created in me a sort of reverence that had somehow inhibited my ability to write one. Then, when I began studying these Russian writers (Bunin, Gogol, Tertz, Petrushevskaya, Kharms … ) their humour and irony fractured this reverence, and I began writing stories quite different to what I had been attempting before.

After about three years I began submitting stories to the Dublin Review, and though most of them were at first rejected, each one was posted back to me with a letter from the editor, Brendan Barrington, outlining what he thought did and did not work, but that he looked forward to further submissions. This kind or constructive criticism helps an emerging writer greatly. The role of a good literary publisher, I think, is not only to publish good writing, but to take seriously the rejection of promising writing too.

By late 2013 my girlfriend, Niamh, and I had emigrated with our dog to Berlin. We were among a new generation of emigrants heading towards mainland Europe as opposed to the UK or the US. Niamh had secured a job in Berlin with Sternberg Press, an English-language publisher of books about art and art theory. She travelled ahead, then a month or so later, I joined her, got work, and began (slowly) to learn the language and to earn some money.

We found a rent-protected apartment in Pankow, and this financial stability created mental space for me to work in. The apartment, however, came completely unfurnished, but I did not care, and during summer 2014 on a found table and chair, I set about writing the first draft of my novel, Love Notes from a German Building Site.

The novel is about an Irish engineer working on a building site in Berlin. Building sites have always fascinated me – the look of them and the hierarchies that exist amid the seeming chaos. My narrator describes his daily struggles with the German language, cultural norms, his increasing disconnection from his work, and the effect all of this has on his personal relationships and sense of self. A month or two later I showed a first draft to Greg, who suggested I send it to his publisher and his agent who both turned it down. What I assumed, for a brief exciting period, would be a straightforward process became four years of redrafts, hope, struggle, satisfaction, despair.

About 18 months ago, I had all but given up on the project. I’d sent it to four more publishers and a few agents. The publishers turned it down and the agents had gone silent. The book had expanded and contracted greatly and the whole sense of the thing had drifted, so I decided to send the manuscript to the writer Selina Guinness. I’d met Selina at an event we were reading at the year before, and apart from the fact that I admire her writing, she seemed also to be the sort of person that might take the time to read my book and maybe offer me some advice.

Lilliput Press had turned down an earlier version a year before, so I was surprised when I got an email from the publisher, Antony Farrell

I think that part of the strength of Irish literature lies in the currents of criticism and generosity that flow beneath its surface. Selina agreed and three months later we met again at the Gresham Hotel. She was on her way to teach a class at the Irish Writers Centre and I was home from Berlin to visit my parents in Co Longford. Selina and I spoke for almost an hour. She had a list of criticisms, most of which centred on the verbs I used throughout the book – these verbs were too passive, she said, and often just lazy, and to counteract this I’d stuffed adverbs around them in the hope of giving the text life, but this only leadened it further.

I took the evening train to Ballymahon, and that night I slept poorly. Then, lying in bed the next morning, it occurred to me that Selina had just given me a whole new set of tools with which to reapproach the text. The book is written in the first person, and I realised, as I began revisiting the verbs, that the narrator’s world (the building site) became more lively, and the narrator became more complex too. Then, the more complex he became the more likely he was to do something unforeseen. Once my narrator began to form, his personality bled back into the text and the whole thing sharpened, altered and came to life again.

In February of last year I sent the manuscript to Lilliput Press. They had turned down an earlier version a year before, so I was surprised when I got an email from the publisher, Antony Farrell, saying that he’d read my new manuscript cover to cover and that they were interested in the book. For the following months I worked with Seán Farrell, a talented editor at Lilliput Press, on improving the manuscript.

Writing a first novel, for me, seems similar to wandering out into a landscape the extents and form of which are not entirely clear or sometimes not even hospitable. Despite this, it is also a difficult landscape to leave. Working with an editor on a first novel is like meeting a stranger, by chance, on this landscape, but they are not bewildered by the landscape, they actually like the place, and they seem to have seen more of it more clearly than you, and they are interested in speaking with you about it.

As the editing process progressed, I often forgot that time was passing. Then, when Seán and I finished our work, the manuscript was formally presented to the board of Lilliput Press to see if it was worth taking on.