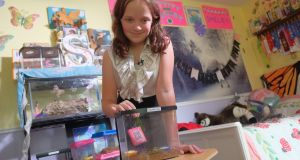 Houses are not just homes but also habitats, and habitats that may well be teeming with life.

In 1969, the microbiologist Thomas Brock reported a surprising discovery. He’d been studying a strange rust-coloured encrustation around the hot springs of Yellowstone National Park that turned out to be a species of bacteria. Thermus aquaticus, as he named it, was thriving at temperatures of up to 80 degrees, much higher than scientists had thought possible. It was to become a celebrated discovery, but what is less well known is that Brock went on to find Thermus aquaticus in rather less exotic locations. Specifically, he found it coming out of the hot tap at his faculty building, and related species have since been identified in domestic water heaters all over the United States.

Such stories, the ecologist Rob Dunn believes, have a clear moral. In Never Home Alone, he assembles an amiable and often fascinating miscellany of similar curiosities, forming a freewheeling survey of what might be termed domestic ecology. His aim, it seems, is not just to uncover the biological richness of the typical household, but to persuade us of its importance as a site of investigation.

For many of us, biodiversity is a vaguely nice thing that happens outdoors. It may come as a surprise, then, to learn that our houses are not just homes but also habitats, and habitats that may well be teeming with life. To begin with, there are almost certainly hundreds of species of invertebrates living in your house, and possibly several thousand. Some of these (like spiders and flies) will be familiar presences, but most (including countless unseen mites and lice) are probably going unnoticed. And the diversity of these populations is remarkable. As Dunn notes: ‘If you see two flies in your home, the odds are that they are two different species.’

If you think that’s impressive (or distressing), just wait until you hear about our live-in microbes. In a survey of a thousand homes across the United States, Dunn and his team identified some 80,000 species of bacteria and archaea. Most of these, he assures us, are likely to be harmless, or even beneficial. Many are found in our homes because they cover our entire bodies, patiently disposing of dead skin cells or devouring pathogens that would otherwise make us sick. But it will take decades, Dunn admits, to study even this modest sample.

It may well be worth the effort. Thermus aquaticus, for instance, turned out to be much more than a curiosity. DNA sequencing, a technology that has become indispensable to modern biology and medicine, relies on two processes. DNA’s double helix structure is broken down using heat, then the separated strands are copied (to produce a sample sufficient for study) using an enzyme called polymerase. Living cells use their own polymerase to do the same job, but the stuff in most cells is destroyed by the heating process. For Thermus aquaticus, though, these conditions are positively balmy. As a result, it is “at the heart of virtually every genetics test being done in the world’.

Even greater discoveries may lie ahead, Dunn believes. Among the countless moulds and encrustations around our houses are dozens of species of Penicillium, the fungus that gave rise to the first antibiotics. But our antibiotics are failing, increasingly overwhelmed by resistant bacterial strains that decades of overuse have invited. Their successors may come from creatures like the thief ants found in kitchens, whose secretions can kill bacteria resembling methicillin-resistant Staphylococcus aureus, more commonly known as MRSA.

Perhaps the most persuasive argument to emerge from these essays is that such promising discoveries are not as unlikely as they appear. Organisms have wondrous abilities, Dunn points out, because they need them to survive in highly specific conditions. This means that ecologists, who puzzle out these accommodations for a living, have a unique head start in the race to find new marvels. But while we may well nod along to all this, it is surely Dunn’s scientific colleagues who need to be convinced.

Still, Dunn does have some guidance to offer the rest of us, if hedged a little by scientific caution. Of the tens of thousands of species you’re sharing digs with, most are likely to be harmless and many are probably doing you good. You don’t need to ratchet up your household cleaning regime, and in fact, you probably shouldn’t. Many cleaning products end up killing things well beyond your home, and your immune system needs to meet bacteria (especially those from outdoors) to learn what’s really threatening. By explaining all this, Rob Dunn hopes to instil in us at least a tentative sense of wonder. Failing that, he suggests, we and our multitudinous lodgers should all just try to get along.

Paraic O’Donnell is a novelist and critic. His most recent novel, The House on Vesper Sands, is published by Weidenfeld & Nicolson