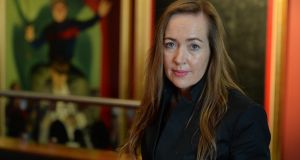 For Irish playwright Marina Carr, “writing is more about the things you cannot understand than the things you can”. The evocation of imaginative “pastures of the unknown” forms a thematic through-line within her work.

The plays of Abbey Theatre co-founder Lady Augusta Gregory offer an intuitive genealogy with Carr which can be identified through language, storytelling, nature, landscape and female characters. Tracing the rich creative lineage of Carr and Gregory challenges the patriarchal origins of modern Irish drama.

Carr’s theatre draws upon the rich well of pre-Christian folk-belief which is present in Gregory’s plays such as The Golden Apple (1916) and The Full Moon (1913). In a talk at the National Library of Ireland in 1995 Carr observed how art is: “The search for the unrepeatable road to new paths, new roads for ourselves on the journey towards divinity and eternity. On the unrepeatable road there is a precedence of the metaphysical world over the physical.”

Carr’s and Gregory’s plays are often named after women, places or the moon where internal rhythms of folklore permeate both playwrights’ dramatic visions, encompassing the intuitive power of the Otherworld as a powerful aesthetic and metaphysical realm.

Lady Gregory was the first Irish playwright to utilise the concept of waiting as a key dramatic device in The Gaol Gate (1906) which influenced Yeats, Beckett and Carr’s Midlands Cycle. Throughout much of Gregory’s and Carr’s plays pockets of surreal, inverted logic and irreverent humour can be traced from one of the first absurdist Irish plays, Gregory’s Spreading the News (1904), through to Carr’s Low in the Dark (1989).

Gregory and Carr foreground the dramatic power of storytelling and poetic language to alter the everyday world in their plays, a vital characteristic of Irish theatre. A visceral connection with the profundity of nature and landscape as sites of inspiration is also central to their visions. Carr is known for the theatrical power of her Midlands landscape and dialect in a tradition which began with Gregory’s unique blend of country speech, character and place of action.

This specificity of location gives their plays what Gregory calls “that poetry of the soil, those words and dreams and cadences of the people that helped me to give some echoed expression to that dragging driving force”.

Carr points out that the sound of her words are as important as the sense: “What you’re trying to do at best is sing, with the tools you have, and language is what I work with. At its best, it’s song; it’s music. When I am writing I always speak it out, and you hear the glitches and when it’s singing and not singing.”

For Carr, theatre is most effective and profound when there is “people, space, time and talk”. The power of language and mythmaking is central to both playwrights, where “talk” spins, unbinds and wondrously reconstructs reality.

From Spreading the News and The Rising of the Moon, Gregory’s theatre is a glorious panoply of all talk, no action, which anticipates Carr, Synge and Beckett. In a key moment of Irish theatre, inmate of Gregory’s The Workhouse Ward Michael Miskell says “All that I am craving is the talk”. Carr’s breakthrough Abbey play The Mai (1994) forms a natural bridge with Gregory’s work, enabling a channel of women’s voices to cross back, forth and beyond.

With its triple frame of female narrator, characters and playwright The Mai reconstructs the patriarchal architecture of Irish theatre on the Abbey stage. Now The Mai builds her own house by a lake “on the most coveted site in the county” in the same way that Marina Carr builds upon Gregory’s foundations for women on the most coveted stage in the country. Like the work of earlier Irish playwrights of the 20th century such as Margaret O’Leary and Teresa Deevy, Carr explores the depths of women’s experiences throughout her plays, addressing women’s sexuality, self-fulfilment, work and the complexities of motherhood.

The figure of the witch or Wise-woman, Biddy Early, recurs throughout this book as a way to rethink the hidden power of women’s dynamic histories. Mary Daly tells us: “Women who can identify with the Great Crones may wish to call our writing of women’s history Croneography”.

For Carr, playwriting is an intuitive process where “You pick things up from the atmosphere and you never know where writing comes from. In the olden days they used to think of writing as more like witchcraft and there’s something in that.”

Marina Carr now joins Augusta Gregory as a woman “on the wall”. On May 12th last year a portrait of Carr was unveiled at the Abbey Theatre. The evocative photographic portrait by visual artist Dorothy Cross presents Carr as a mirror-image of herself against a backdrop of roughly-hewn rock-face in the Connemara landscape.

This double-portrait reflects the dual-aspect of Carr’s dramatic vision as she and Gregory face one another on the stairwell of the Abbey Theatre. Out of eight portraits of women, only two have written plays. Now Carr and Gregory face one another on the key entrance and exit points of the foyers, opening new stages of visibility for women past, present and future.
Melissa Sihra is Head of Drama at Trinity College Dublin. Marina Carr: Pastures of the Unknown is published by Palgrave Macmillan