In praise of older books: Into Thin Air by Jon Krakauer (1997) 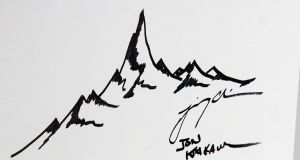 Why would anyone climb Mt Everest?

May 1996. Open season in the Himalayas. Mountaineers gathered. Some were experienced; others, novices paying to be dragged, pushed or carried to the roof of the world.

Jon Krakauer, journalist with Outside magazine, had joined a guided expedition led by New Zealander, Rob Hall, who’d already put 39 people on the summit. That May there were eight more waiting. As Krakauer flew to Kathmandu, he looked out the plane’s window. He saw “the unmistakable profile of Everest. . . I proposed to climb to the cruising altitude of an Airbus 300 jetliner. . . My palms felt clammy”.

Hall’s group assembled. They trudged towards base camp,17,600ft above sea level, crowded with climbers from other expeditions. As Krakauer said, “it sometimes seems as though half the population at base camp was clinically delusional.”

They inched upwards. Altitude sickness kicked in. Exhaustion, wasted muscles and fat, fluid-filled lungs, crushing headaches. Starved of oxygen, brain cells dying. As they reached the “Death Zone”, above 25,000ft, they used bottled oxygen. “English air” the Sherpas called it. Thousands of empty canisters despoiled the pristine slopes. Bodies, too, frozen solid, abandoned, some for years. A foretaste of what was to come.

At 1.12pm, May 10th, Krakauer, exhausted, disorientated, “found myself atop a slender wedge of ice, adorned with a discarded oxygen cylinder. . . with nowhere higher to climb”. He should have felt “a surge of intense elation”; instead he had an “overwhelming apprehension about the long, dangerous descent that lay ahead”.

What lay ahead was a sudden “murderous storm”. Nineteen men and women were trapped on the mountain. Eight would die. Frostbite would destroy the limbs of others. Guilt, despair and regret would blight the lives of the survivors.

So why? Krakauer writes with vivid honesty. “A triumph of desire over sensibility. . . The plain truth is that I knew better but went to Everest anyway. And in doing so I was a party to the death of good people.”