The Sky Is Falling: Muddled and a bit barmy 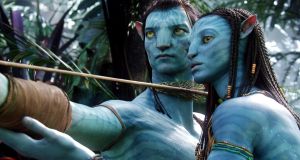 Avatar: Peter Biskind argues that the film was “such a big hit it’s easy to forget how extreme it is”.

Book Title:
The Sky is Falling: How Vampires, Zombies, Androids and Superheroes Made America Great for Extremism

Still best known for Easy Riders Raging Bulls, a gossipy doorstop that belatedly apotheosised Hollywood’s early 1970s, Peter Biskind here returns to the cultural meteorology he entertained in his 1983 book Seeing Is Believing. That volume’s subtitle laid out its reasonable proposal: “How Hollywood Taught Us to Stop Worrying and Love the Fifties”. The cover of Biskind’s latest appears to do the same. The Sky Is Falling will, it seems, explain: “How Vampires, Zombies, Androids and Superheroes Made America Great for Extremism”. This doesn’t quite happen.

Note that “Made America Great”. The unavoidable implication is that Biskind believes popular culture – and movies, in particular – foreshadowed the rise of Donald Trump and his MAGA hordes. “Our prophets of doom are not outlier economists, but the directors and writers of extremist content,” he writes. That does not seem like an unreasonable argument. Remember that the highest-grossing film of 2014 in the US was Clint Eastwood’s flag-waving, militaristic American Sniper. That alone should have alerted the complacent left to an ignored fly-over population that was set to soon awake in Shelley’s unvanquishable numbers.

Eastwood’s film receives not a single mention in The Sky Is Falling. Biskind’s thesis is more obscure, more muddled and – dare one say it? – a deal barmier than that outlined above. He is less interested in pitching left against right than pitching centrists against extremists from either wing. Early in a short book that seems long, he drags out sound arguments about the political consensus that followed the second World War. While Eisenhower tolerated remaining dregs of the New Deal, Hollywood told stories that hung around pluralism and compromise. Biskind is cine-literate enough to allow exceptions. In a pretty distinction, he suggests that right-wing movies favoured the “cops” (who would punish the bad guys) and left-wing movies celebrated the “docs” (who would cure those guys of their badness). But the author believes the prevailing tendency was – to paraphrase Derek Smalls of Spinal Tap – away from the fire/ice binary and towards lukewarm water.

At some point in the last several decades the moving image abandoned that cosy attitude and embraced the supposed horrors of “extremism”. Biskind never pins down when the switch is supposed to have happened. Political scientists would argue that the post-war consensus concluded with the ascension of Ronald Reagan and Margaret Thatcher at the end of the 1970s. But that seems awfully early for a warning of impending Trumpism. Sure enough, Biskind plucks most examples of “extreme left” and “extreme right” content from the current century.

Here is where the book’s arguments begin to take on the quality of late-night musings at the junior common room bar. A cultural commissar more suited to the court of Pere Ubu than Comrade Stalin, Biskind scatters films and TV shows semi-randomly about his political spectrum. Christopher Nolan’s Dunkirk (conceived as early as the mid-1990s) is a “pro-Brexit morality tale”. Vampires are, apparently, centrists and zombies are extremists, but The Walking Dead, which concerns the latter category of undead, is repeatedly described as a centrist show. How are such decisions being made? “Whereas the centre frowns on personal agendas, the left indulges them,” Biskind writes. Okay then.

If you don’t remember Avatar clearly then fear not. Biskind is happy to recount its banal plot at exhausting length

If the loyal comrades find that hard to swallow they will require the Heimlich manoeuvre after any attempt to ingest the author’s views on James Cameron’s Avatar. That’s the same “extreme-left” space opera that became the highest-grossing film of all time at the start of this decade (a title it still holds). Cameron is certainly a committed, ecologically minded liberal, but the People’s Revolutionary Front of Malibu will be waiting some time for his attendance at the mimeograph machine. “Avatar was such a big hit it’s easy to forget how extreme it is,” we read through rubbed eyes.

If you don’t remember Avatar clearly then fear not. Biskind is happy to recount its banal plot at exhausting length. Just when the reader has forgotten about the blasted thing, he or she will encounter the words “meanwhile in Avatar” as we return to another episode from the film every wag once called “Dances with Smurfs”. He does the same with The Walking Dead and the vampire show True Blood. The sense emerges of an author furiously trying to paper over a thesis that withered in his brain shortly after the submission was accepted.

Yet there is some excellent critical writing here. His pastiche of right-wing paranoia about “social justice warriors” is spot on. Biskind has the dinosaurs complaining about “delusional feminists noisily imagin[ing] men massaging their penises behind potted plants”. That passage also points us to the real cultural heralds of the Trump revolution. The signs were evident in the socially reactionary GamerGate campaign that helped launch the grim career of Milo Yiannopoulos. They were there in Reddit groups whining about the feminisation of comic books. You could find them under every second rock in the digital slime.