Drive your Plow over the Bones of the Dead by Olga Tokarczuk: much to admire 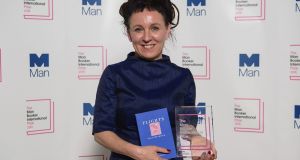 Book Title:
Drive your Plow over the Bones of the Dead

Janina Duszejko has found her neighbour dead in his house and with the help of another neighbour is making his corpse presentable for the arrival of the relevant authorities. She is particularly struck by the feet of her neighbour whom she has nicknamed appropriately Big Foot and she falls to thinking, “it is in the feet that all knowledge of mankind lies hidden; the body sends them a weighty sense of who we really are and how we relate to the earth. It’s in the touch of the earth, at it’s point of contact with the body that the whole mystery is located – the fact that we’re built of elements of matter, while also being alien to it, separated from it”. This mixture of graphic realism (Big Foot’s feet are described in forensic detail) and broad speculation are characteristic of the style of Olga Tokarczuk, one of the most distinctive and original voices in contemporary European literature.

Unlike Flights, winner of this year’s Man Booker International Prize, Drive your Plow over the Bones of the Dead does not range across different places and historical periods but remains focused on one place, the Plateau, a remote region on the border between Poland and the Czech Republic. Duszejko is an English teacher who looks after the houses of summer residents in the winter months. The life of the sparsely populated community on the Plateau is brutally disrupted by the unexplained murders of a series of local notables involved in hunting and culminating in the death of the local hunt chaplain, Fr Rustle. These deaths are framed in a wider narrative of the animal deaths accompanying the active hunting tradition in the region and the slaying of the heroine’s dogs which unleashes its own cycle of destruction.

At one level, Duszejko is a radically understated eco-warrior, a discreet apostle of animal liberation who tells a sceptical policeman: “Its animals show the truth about a country”. She is also an amateur astrologer who seeks out correlations between the contents of films broadcast on television and the configuration of the planets. It is precisely her ecological (the animals took revenge on the hunters) and astrological (the planets were in the wrong place) explanations that lead to her being dismissed by the authorities as a crazed crone, a female St Francis with her head in the stars.

Tokarczuk’s singular achievement is to show how the marginalised, the disregarded, the despised have access to ways of knowing that are outside the perimeters of conventional thinking. The title of the novel and the epigraphs and quotations scattered throughout the book are taken from the writings and letters of William Blake. There is a Blakean scepticism that runs through the pages about the validity of a form of reason that is all too often the alibi of privilege – the privilege of gender, species or wealth. There is also a Blakean preoccupation with spirit and matter and with what to do with what Duszejko calls “a troublesome piece of luggage”, namely, “this body of ours”.

Oddball’s feet pose the question of how we square our existence as material animals caught up in the living cycle of Earth’s organisms with the anxious speculations of human consciousness.

Tokarczuk’s previous novel Flights is full of tales of plastination, the history of the technique used in anatomy to preserve bodies or body parts. There is a similar fascination in Drive your Plow over the Bones of the Dead with death and the physical life of the body after death as the material afterlife that continuously interrogates us about life itself.

Like her heroine, who sees everything as connected to everything else and every event bound up by a “complex cosmos of correspondences”, Tokarczuk has a compelling capacity to seek out parallels or juxtapose stories or experiences that constantly draw the reader off trail. On many occasions, the disorientation is a kind of laughter in the dark. Janina Duszejko, at one point, offers a theory about what happens to men after a certain age. She dubs this “testosterone autism” which she defines as “a gradual decline in social intelligence and capacity for interpersonal communication, as well as a reduced ability to formulate thoughts. The person beset by this ailment becomes taciturn and appears to be lost in contemplation. He develops an interest in various tools and machinery, and he’s drawn to the second World War and the biographies of famous people, mainly politicians and villains”.

Duszejko’s friend Dizzy is fortunately not afflicted by this ailment and while talking away happily translates Blake in her kitchen. Tokarczuk has every reason too to be grateful for the linguistic friendship of another translator Antonia Lloyd-Jones who has once again done a remarkable job of capturing the uncanny distinction of Tokarczuk’s prose in English. There is much to admire in this book and even more to learn.
Michael Cronin is 1776 Professor of French in Trinity College Dublin and director of the Trinity Centre for Literary and Cultural Translation