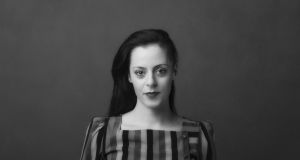 Annemarie Ní Churreáin: I believe poetry has the potential to unbury us and restore us back into the landscape to which we truly belong

I grew up in northwest Donegal on bogland named Cnoc Na Naomh. Legend tells that on this hill four men met to decide who among them would convert the area from paganism. It’s a legend I heard all though my girlhood and one that remains popular, not least because it contains all the ingredients of a good story; conflict, strong characters and, of course, the divine intervention of God.

When I think today of that hill, I think of the dark bleed of the horizon in the late evenings as the birds rise blackly out of the heather. I think of the way the bog wants to carry the human voice. I think of the fact that I was raised in the shadow of men who wanted to conquer the wildness around them. As I prepare to launch my debut collection of poetry, Bloodroot, this landscape is very alive in my mind as I reflect on certain questions: what is the relationship between landscape and lyrical control? Between control and imagination? Between the place that I physically come from and the State in which I, as a woman in Ireland today, now exist?

Bloodroot is a book dedicated to my foremothers, in particular the women of my family whose voices were not always heard. The title poem references the journey my grandmother took in the spring of 1951 from Northern Ireland down into Co Westmeath where she gave birth to my father at the Castlepollard Mother and Baby Home. It was here, in the same year that Noel Browne resigned as minister for health following the failed Mother and Child Scheme (which the Catholic Church called “anti-family’) that my grandmother was forced to relinquish her child to adoption. It is at this point in the history of the State that poetry as a form of protest began like a code to write and rewrite itself into the DNA of who I am.

For me the urge to name things and speak aloud comes from a self that predates verbal language or literacy skills. It’s a desire so bound up in ancestral loss that by the time I learned to write a word on a page, the sensitivity for poetry was already fully formed. Growing up in the 1980s with this type of predisposition was both exciting and terrifying, and all around the atmosphere of the State was as potent as the scent of mink on the hill. I attuned my ear to the tone of family conversations about adoption records, legal rights and tracing. I observed registered letters, secret numbers, pensive moods. When you live with someone who might be anyone, you learn the mixed-up language of fear and expectation. I watched my family roots get traced out of one county and into another as on The Late Late Show three girls who were hoping for the Virgin Mary to appear said they too were waiting for a sign.

Sometime in the early 1990s a name and number scrawled on a torn paper was pinned to the noticeboard on the kitchen wall. The first name was my nickname: A-N-N-I-E. It was also the name belonged to my newly traced grandmother and overnight what I was called became a hushed word imprinted with loss and all the tricky and messy dynamics of reunion. Even today, that name is hard for people I love to say. In 1994, Ireland’s first female president stepped forth and I, a sulky teenager, was packed up and sent unhappily over the Derry border to meet the new “real” family. Of this trip all I can recall is the new currency, the accent, the mere outline of a woman who referred to me for a while as “one of her own”.

Throughout the 1990s, this experience of family in flux was further amplified when I found myself in the role of foster sister in my own home to kids in care. It was the State care system that shifted me out of my everyday spoken Irish and into the language of court orders, disclosures, social worker plans. In just a few short years I accumulated more than 30 siblings, becoming at various points the “oldest”, the “middle child” and “the youngest of the teens”. If I cannot recall with any clarity the “C case”, after the “X Case”, and the burgeoning debate around the reproductive lives of Irish women, it is because I had been catapulted into a crisis relationship with the children of the Irish State. If I remain wary today of State care systems and policies, it’s because they disappeared from my life, without explanation or proper support, many of the people I have loved. It is at least in part the State that has taught me what I know in my poetry about space, power structures and the unsaid.

Over the years, the State’s influence has, like a lake beneath a lake, revealed itself as a presence in the back of my work. For me, poetry is not only about language; it’s about control. Poems come out of the self as a form of revolt against the push and shove and thrust of a deeply patriarchal society. Bloodroot has been a deeply emotional journey and I hope that this book will be read in a spirit of reflection and in support of the women of Ireland today who still find themselves, their bodies and their families, at the mercy of the State.

To the business of hope, poetry brings not only a mysterious radio but also a high regard to brokenness and repair. As poets we count syllables, break lines, separate verses; we strip, part and pair to free a new meaning that moves us backward and forwards in time, alive and embodied.

One of the great joys of my life is the opportunity to read poems aloud. When the poet recites, attention returns in towards the body, the mouth, the lung, the air. In my poem The Kerry Foot, written after “The Kerry Babies”, I write of the body as “claimed and buried enough”. I believe poetry has the potential to unbury us and restore us back into the landscape to which we truly belong, placing the body back at the centre of human experience, placing human experience back at the centre of the State.
Annemarie Ní Churreáin is Kerry County Council Writer In Residence. Bloodroot is being launched by Doire Press at 6.30pm on Thursday, October 26th at the James Joyce Centre, 35 North Great Georges Street, Dublin. More info doirepress.com

Six Ways to Wash Your Hands (Ayliffe, 1978)
for the Mother and Baby Homes Commission of Investigation

1
Wet hands, apply soap and rub palm to palm
until a white lather forms like the spit and rage of women,
who, having lain among waves, were dragged back up again
by the hair and stripped of their names to pay for the wrongs
in their bellies, as they stitched lace, pressed linen sheets,
and each week bowed their heads to the post-partum girls
all lined up at the font like a row of roots half-pulled
out of the earth and still holding on to their young.

2
Rub right palm over left dorsum and left palm over right dorsum
to ensure the scent of infant leaves your skin: the sour fumes
of bottled milk, triangled terry cloth, ice-cold smears of cream.
The scent of sin can cling for years as potent as a bad dream
of trade-deals, needle pricks, poppies bloomed on the skull.
The scent of a child in an unmarked grave may get in beneath
your fingernails and cause all sorts of problems in later life.

3
Rub palm to palm, fingers interlaced and around the wrists
to erase all trace of fathers. Never mention cuffs.
Never mention scars. Raise your head against the sky
and let the violet clouds overfill your eyes as the names
of these men become again unknown as birds.
When you see a wing, like a realm of thumbed pages
fluttering, take this as a sign: the fathers are no more.

4
Rub backs of fingers to opposing palm with fingers interlocked
and loosen the joints of wards, nurseries, bolted pantries
stocked with canisters of warm milk and cheese sold
by the yellow quart as the imagined cream of it dripped
from the mouths of hungry, swollen girls. Rub out the halls,
statues, sills. Leave only a rusted nail in a cemetery wall.

5
Rotational rubbing of right thumb clasped in left palm and vice versa
to disimprint the memory of files. Wash clean the data
until days, months, years signed by clammy hands run
like slip-streams into a great shaking lake. This means
that, even should your lips part to release a holy word,
all that will spill out is a wet pulp no one understands.

6
Rotational rubbing backwards and forwards with clasped fingers
of right hand in left palm and vice versa to wear thin the heart-lines.
Be a sister and repeat the law like a hymn into the sink.
Do not commemorate: Do not remunerate. Do not let
the wounded woman or her child speak in a bare tongue.
Wash in this way and rid your hands of Mother, Baby, Home.