No child should grow up without meeting Little Miss Muffet 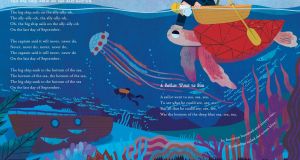 Nursery rhymes, songs, verse and lullabies are part of a child’s literary heritage. Passed down from parent or family member to baby or young child, they stretch back generations. No child should grow up without meeting Little Miss Muffet, the fighting Cats of Kilkenny and the Owl and the Pussy Cat.

Some children first encounter them in playschool, along with action rhymes like the Wheels on the Bus and I’m a Little Teapot, and the Government is to be commended for their early childhood care and education scheme which provides a free year of playschool or care for every preschool child in Ireland, which I hope provides an ideal opportunity for young children to sing and clap along to nursery rhymes.

Lullabies are found in every culture – designed to calm and soothe a child to sleep; they date back centuries. Nursery rhymes date back centuries too and come from many different sources – traditional riddles, proverbs, useful learning rhymes (30 days hath September), drinking songs, even political events.

She’ll Be Coming ’round the Mountain. It’s said to be about Mother Jones, aka Cork-born Mary Harris, a trade unionist who organised strikes for coal and railway workers

The term nursery rhyme was commonly used from the late 18th century. The first well-known nursery rhyme collection was Mother Goose’s Melody or Sonnets for the Cradle, published by John Newbery in London about 1780. No surviving copies exist – a common case when a book was popular and actually shared with and used by children. The “moral” tales with staid stories and unappealingly good characters tend to be found in mint condition. Rhymes which appeared in this collection included Hush-a-by Baby, Hey Diddle Diddle and Jack and Gill (sic).

I’ve always found the origin of these rhymes and songs fascinating. Hey Diddle Diddle is said to be either about Richard III and his path to the English throne, or Queen Elizabeth’s court, as she loved giving the members of her court nicknames. However, my favourite explanation is this – it’s a lesson in stargazing, outlined in one of my favourite books about nursery rhymes: Pop Goes the Weasel: The Secret Meanings of Nursery Rhymes by Albert Jack (Penguin). He says: “There are certain nights of the year, usually in April, when particular constellations all appear close to the moon at the same time. The line-up is the Cat (Leo), the Cow (Taurus), the Little Dog (Canis Minor), the Dish (Crater, a dish-shaped constellation), the Spoon (Ursa Major – the Big Dipper in the US, or the Plough in Britain), the Fiddle (Lyra), and the moon.” He explains that when all these constellations line up in the night sky, it’s the ideal time for farmers to plant their seeds.

Jack also explains that Humpty Dumpty was the name of one of King Charles’s most powerful cannons which sat on top of a church tower in Colchester in 1648. The cannon kept Cromwell’s army at bay until it was blown off the tower by his troops. News of this win for the Roundheads spread, bringing the witty new Humpty Dumpty rhyme along with it. There really was a Little Miss Muffet, daughter of Dr Thomas Muffet, a doctor known for his study of insects; and Mary of Mary Had a Little Lamb fame, may have also existed; she was said to be the cousin of the poem’s author, Sarah Josepha Hale, who really did bring a lamb to school with her in the 1830s.

When I had children of my own, I was itching to share the nursery rhymes of my childhood with them. However, when I went looking for collections I quickly realised that the only Irish rhyme in any of the books (mainly UK and US published) was Two Cats of Kilkenny. So I decided to do something about it.

I spent several years researching my first nursery rhyme collection (with Claire Ranson), Sally Go Round the Stars, trying to find Irish content. I trawled through old song books, books of folk lore, old children’s books and magazines, everything I could get my hands on.

For the latest collection, A Sailor Went to Sea, Sea, Sea (illustrated by Steve McCarthy), I went even further. I interviewed older people about the childhood rhymes they remembered, I read school books and poetry books, determined to find even more Irish content. I contacted contemporary Irish children’s poets and asked to read their work, both published and unpublished. I unearthed a treasure trove of poetry that I felt Irish children would connect with by a feast of different writers, some well known, others not so well known: Francis Ledwidge, Oliver St John Gogarty, Oscar Wilde, James Joyce, Alice Taylor, Julie O’Callaghan, Aislinn and Larry O’Loughlin, Lucinda Jacob. I added Óró, Sé Do Bheatha ’Bhaile as it always makes me sing along (there’s a terrific version by Seo Linn on You Tube), and I was fascinated to discover the Irish background to one of my other favourite songs, She’ll Be Coming ’round the Mountain. It’s said to be about Mother Jones, aka Cork-born Mary Harris, a trade unionist who organised strikes for coal and railway workers and was once called “the most dangerous woman in America” for her rebel rousing.

In the early 20th century artists such as Randolph Caldecott, Kate Greenaway and Arthur Rackham added illustrations to nursery rhyme collections, making them a visual treat for young children. Modern children live in an increasingly visual world and picturebooks and nursery rhyme collections are their first introduction to art. So I’m delighted to report that award-winning designer and illustrator, Steve McCarthy came on board once again to bring colour and life to the rhymes, poems and songs in A Sailor Went to Sea, Sea, Sea.

The collection is very personal – it’s a map of my childhood – songs my mother sang to me, poems my Dad read out loud as I snuggled on his knee, songs from Girl Guides (The Rattlin’ Bog and On Top of Spaghetti were campfire favourites), poems from school. I hope modern Irish children and their parents enjoy them as much as I did.
Sarah Webb is an award-winning champion of children’s books and a writer for both children and adults. She teaches creative writing in the Irish Writers Centre and runs writing clubs for children with Story Crew. www.sarahwebb.ie Her latest book is A Sailor Went to Sea, Sea, Sea – Favourite Rhymes from An Irish Childhood, with illustrator Steve McCarthy