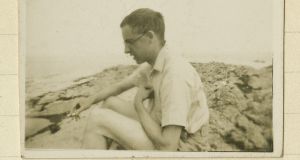 Philosophers have had nothing like the influence in Ireland that their fellows have in other EU countries. Compare, for example, the widely acknowledged philosophical education of Emmanuel Macron by Paul Ricoeur; there is no local example. Be that as it may, one leading philosopher of the 20th century, Ludwig Wittgenstein (1889-1951), visited Coleraine before the first World War and came to like Ireland when he visited again in the 1930s. The association became much closer when he resided in different locales – Wicklow (Redcross, near Arklow), Connemara (Rosroe) and Dublin– from November 1947 until June 1949.

Wittgenstein’s residence here did have an influence, if not in politics, certainly in the humanities. One can cite Richard Murphy’s poems (The Philosopher and the Birds, 1953 and Killary Hostel, 1985); Alan Titley’s short story Wittgenstein I gConamara, 1987; Terry Eagleton’s novel, Saints and Scholars (1987) and his collaboration in the script of Derek Jarman’s film, Wittgenstein, 1993. Then there is Brian Friel’s play Give me your answer, Do!, 1997. Notable also is Tim Robinson’s evocation of Connemara under a subtitle reportedly sourced to Wittgenstein: The Last Pool of Darkness, 2008.

So far as politics goes, the then minister for tourism, John Wilson, unveiled a plaque in Wittgenstein’s memory at the Ashling Hotel in Parkgate Street in 1988 and President Mary Robinson did the same in Rosroe in 1993. (The Ashling was rebuilt on the site of Ross’s Hotel, where Wittgenstein resided in a quiet top-floor room and enjoyed a period of creativity that fed into his second classic work, Philosophical Investigations.)

Crucial to Wittgenstein coming to Ireland to stay – the first visit excepted – was his friendship with Maurice O’Connor Drury, who was born in 1907 in Exeter to Irish parents. He was one of Wittgenstein’s first students when he took up lecturing in Cambridge in 1930. Teacher and student formed a friendship that lasted until the philosopher died in 1951. Meanwhile, under Wittgenstein’s influence, Drury abandoned an intention to take Anglican orders and trained instead in medicine at Trinity College Dublin. In this he was financially assisted by Wittgenstein’s patron, John Maynard Keynes, the economist, among others.

Shortly after registration as a medical practitioner in 1939, Drury joined the Royal Army Medical Corps. He first served in Egypt and then worked in a tented hospital in France following the Normandy landings. On demobilisation, he took up a temporary position in St. Patrick’s Hospital, Dublin. This arrangement turned into a career commitment to psychiatry. In 1950, Drury was asked by the director of St Patrick’s, Dr Norman Moore, to take over responsibility for St Edmondsbury in Lucan, an institution described on its notepaper at the time as “a branch hospital [of St. Patrick’s] and a farm” (supplying milk to the Dublin Voluntary Hospitals).

Drury married the matron of St Patrick’s, Eileen Herbert, in 1951 and thereafter lived in an apartment in the Lucan clinic. The couple had two sons. They came to prominence as Prof Luke O’Connor Drury, school director of the Astronomy and Astrophysics section of the Dublin Institute for Advanced Studies (immediate past-president of the Royal Irish Academy) – and Paul Drury, a very distinguished journalist, equally gifted in Irish and English.

Drury wrote a record of his friendship with Wittgenstein in a journal format; Wittgenstein’s biographer, Ray Monk, was “captivated” by it when he read it as a postgraduate student on a bus from London to Oxford. Drury also gave lectures in “normal psychology” to medical students in the Royal College of Surgeons and to fellow psychiatrists. The latter lectures were published in a book entitled The Danger of Words in 1973. He also gave lectures on philosophy in TCD and an important one in UCD in 1967.

He also wrote a series of letters on philosophy for the benefit of his son, Luke. These were circulated in mimeographed form in America for many years and finally published in 1983. In these ways, Drury shared his experiences of his teacher and friend but took care to replenish his own interpretation by means of a correspondence with one of Wittgenstein’s literary executors, Rush Rhees. Rhees was an American academic who lectured in philosophy at the University of Swansea.

One can find in the Drury writings insights of considerable relevance to interpreting Wittgenstein. One example is a remark that Wittgenstein made shortly before he died

One can find in the Drury writings insights of considerable relevance to interpreting Wittgenstein. One example is a remark that Wittgenstein made shortly before he died: “I am not a religious man but I can’t help see every problem from a religious point of view. That is how I would wish to be understood.” This was the original version given by Drury. Later, when quoting it again, he dropped the last sentence. In doing so, he almost certainly did not intend that the import of the remark would be weakened. However, this is what has happened in the extensive technical literature, which cites the abbreviated remark ubiquitously. And there are many other remarks that Drury cites in severe criticism of interpretations of Wittgenstein, including by such contemporary luminaries as Gilbert Ryle, AJ Ayer, and JL Austin.

Drury was a modest man and for many years, I as a practitioner of philosophy in Limerick have felt that he was neglected – maybe on that very account. Others have also thought that something should be done about this, notably Prof David Berman of the philosophy department in TCD and Prof Michael Fitzgerald of child and adolescent psychiatry in the same institution. These two invited me to join them in the task of reproducing a version of some of Drury’s writings published by the Thoemmes press in 1996. This led to my meeting Drury’s sons, Luke and Paul, and their offering me their father’s papers, which were later deposited for the benefit of visiting scholars in Mary Immaculate College.

An article of mine about Wittgenstein led to an invitation by Bloomsbury Academic Publishers to prepare a proposal for a full version of Drury’s writings and I persuaded Paul Drury to act as co-editor. We proposed that the book would be introduced by an account of Con Drury’s friendship with Wittgenstein and capped by an appendix covering his Irish family background and details of his associates in the Wittgenstein circle.

Also to be discussed was Drury’s involvement in the debates concerning Wittgenstein’s interment as a Roman Catholic, his sexual orientation and his mental stability

Also to be discussed was Drury’s involvement in the posthumous debates concerning Wittgenstein’s interment as a Roman Catholic, his sexual orientation and his mental stability. In regard to the latter, Drury, who helped Wittgenstein over a depressive episode while he was in Wicklow, was to vividly illustrate in his writings how mental illness – the most pitiable of all medical conditions, he felt – could nevertheless co-exist with remarkable contributions to human enlightenment.

The bulk of the volume, however, was to be taken up by Drury’s writings – published and unpublished (mostly letters to Rhees) on Wittgenstein, philosophy, religion and psychiatry (including a treatise on hypnosis that had a disappointing publishing history).

To my great regret Paul Drury died, far too young, of cancer, a week or two after we received word from Bloomsbury that we were to proceed with the above project and hence I am the sole editor of the Selected Writings of Maurice O’Connor Drury on Wittgenstein, Philosophy, Religion and Psychiatry (Bloomsbury Academic, 2017, 470 pp), to which Ray Monk contributed a generous foreword.

Caoilinn Hughes: ‘The patriarch is still at large’ in Irish society
Real news has value SUBSCRIBE