The colourful life of the Countess of Blessington, Ireland’s forgotten bestselling author 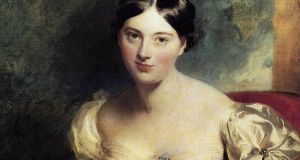 Visitors to Clonmel, Co Tipperary, might be puzzled by a sign near the bridge onto Suir Island – Lady Blessington’s Bath. Why not the Viscountess of Canterbury’s bath or La Comtesse de Saint-Marsault’s bath? It is equally improbable that Marguerite Gardiner, Countess of Blessington – at one time Britain’s bestselling author – ever bathed in that muddy weir.

No record exists of Suir Island’s toilet arrangements but it was certainly the childhood home of Blessington, then just plain Margaret, and her two sisters, who all ended up as countesses with no help from their father, Edmond “Beau” Power.

He was, nonetheless, an exceptionally colourful figure: an elegant sportsman, snob, drunkard and congenial host. Among those he welcomed with open bottles was Viscount Donoughmore of Knocklofty, whose majestic country house stands above Clonmel.

Before long she was the nation’s highest-earning writer, enjoying an opulent lifestyle and presiding over London’s most influential salon

Donoughmore came to tempt his gullible neighbour into the unremunerated position of arresting magistrate, hunting down Irish rebels with a ludicrous implication of a peerage. Power undertook his duties with such zeal that he neglected his land and business and was soon desperately in need of money.

His solution was to sell the 14-year-old Margaret to the insane Captain Maurice St Leger Farmer. Twelve weeks later the newly married officer was arrested on charges of violence, court-martialled and deported to India, while his severely battered bride returned to her near-bankrupt father. Unperturbed by this horrendous experience, which probably accounted for her infertility, Margaret forgave the hapless Edmond, and set about restoring her family’s fortunes.

Why so much about Edmond? Firstly, because it can be seen that the men who mattered to the Countess of Blessington were all clones of her father – fine-looking, overdressed, self-important fools. Second, despite the many hundreds of her preserved letters, prolific publications and mentions in innumerable biographies, little can be stated with absolute certainty about her early years.

We know that she was born in 1789 and she died in 1849. We also know that, after her father was acquitted of the murder of a peasant and struck off as a magistrate in 1808, she left Ireland and returned only once.

Captain Thomas Jenkins, an English gentleman of impeccable credentials, fell for her charms. They married and he took her to live at his splendid estate in Hampshire (now the home of composer Andrew Lloyd Webber). There she stayed for six years, devouring the family library, and emerged as the beautiful lady called Marguerite, who Lord Byron called his “Irish Aspasia”.

When Jenkins fell on hard times, like Edmond Power, his solution was a sale. The recently widowed Charles Gardiner, Lord Mountjoy (students of Dublin will know that O’Connell Street was once Gardiner Mall and will be familiar with Mountjoy Square) is reputed to have paid £10,000 (£5 million plus today) for an already-married trophy wife.

The spendthrift multimillionaire, having also purchased the title Earl of Blessington, waited until Maurice St Leger Farmer fell to a horrible death in the Fleet Prison before marrying Marguerite on February 16th, 1816. Their honeymoon was spent at Mountjoy Forest, Blessington’s vast estate in Co Tyrone, where the new countess became acquainted with her four step-children, cared for by his dependent family.

The Blessingtons were fabulously rich but not happy. Scandal and envy drove them from London. For seven years they roamed Europe, living in unmitigated splendour in a sexually complex menage a trois with the flamboyant dandy and artist Comte D’Orsay, 12 years Marguerite’s junior.

The greatly culled detail of their incredible adventures can be read only between the lines of the countess’s monumental Idler travelogues, where a few remnants of the sarcasm and sardonic wit for which she was famed survive. In March 1823, while in Genoa, Lord Blessington learnt of the death of his nine-year-old son and heir. Marguerite was then so enthralled by the company of Lord Byron, then living in Italy, that she forgot to show sufficient compassion and refused to accompany her bereft husband back to Ireland.

Displeased, Blessington altered his will, effectively leaving his fortune to D’Orsay, provided he married one of his two daughters when she turned 15. In 1827 Blessington ensured that his new heir did so – with disastrous results.

The Earl of Blessington died two years later, aged 46, leaving his affairs in chaos and his widow with a meagre annuity. She continued to cultivate D’Orsay – for reasons of love. When his unconsummated marriage was eventually dissolved he received a huge settlement but soon gambled it away, thus becoming dependent on Marguerite.

Undaunted, she exploited her plethora of influential contacts including Dickens, Disraeli – who wrote his novel Venetia whilse staying with her – Wellington, Captain Marryat, Bulwer-Lytton and Walter Savage Landor, and before long she was the nation’s highest-earning writer, enjoying an opulent lifestyle and presiding over London’s most influential salon.

During this time she wrote novels, poetry, cod philosophy, travelogues and editorials, while serving as editor for popular annuals such as The Book of Beauty and The Keepsake. Probably her most popular and enduring work was 1834’s Conversations with Lord Byron, though her Idler in Italy, published in 1839, and Idler in France, released in two volumes in 1841, were also bestsellers.

Then it all went wrong, again. Her health suffered and her work no longer sold. D’Orsay, in phenomenal debt, fled to Paris. Believing herself in similar straits, the sick and ageing Marguerite followed him and died in May 1849. In London her auctioned effects raised sufficient for her to have lived comfortably. Many of the buyers were her old friends.

Today, she is buried beside Comte D’Orsay in the hideous mausoleum he designed for them both at Chambourcy outside Paris.

Not only is it a tragedy that the brilliant child bride of Clonmel – and her remarkable family – are now all but forgotten, but that their story has been told with little wit or imagination.

In my fictionalised account of her life, Bounty of a Stolen Empire, I have tried to fill the gaps and make sense of the endless stream of extraordinary events which made the Countess of Blessington so fascinating.

Tom Hanks on Covid-19: ‘I had crippling body aches, was fatigued all the time and couldn’t concentrate’
Real news has value SUBSCRIBE