A good Frankfurt: how Irish fared at the book fair 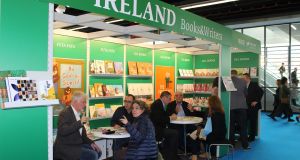 Every publisher dreams of having a “good Frankfurt”. This publisher is not free from such aspirations.

I am sitting here on a Saturday morning, exhausted in the aftermath of Friday night’s now legendary Irish party, the must-attend do for the Anglophone community in Halle 6.

Waves of bright-eyed book lovers (on a Saturday the general public is allowed in) scour the stands for bargains and fancy brochures.

I recall those overbooked restaurants, hotels that more than treble their room rates when the Book People come to town, agitated taxi drivers. Frantic construction everywhere to make sure there is room for those post-Brexit City bankers. I could go on with this ignominious list.

One encountered scepticism, condescension and corporate stupor, as well as raised eyebrows and budding interest in what our writers offer, and yes: it is worth it all.

Our recently announced co-operation deal with Head of Zeus is showing results. New Island writers such as June Caldwell, Conor Brady, Oisín Fagan and Mia Gallagher will soon be published in the UK and the Commonwealth in book and ebook form, with translation rights becoming part of their portfolio.

There is also the William Wall story: after winning the Drue Heinz Award in the US (the first European to do so) and well-timed coverage in Publisher’s Weekly, we are grabbing this opportunity to bring about a well-deserved breakthrough for this Cork writer; but that will be another day’s story.

Favourite shoutline seen (on the fair’s own behalf): “When we held our first Fair at Frankfurt, we thought the Earth was flat”. Nice one.

Will I be back next year? Certainly.
Edwin Higel is publisher of New island Books