From Notre Dame to Haji Ali Dargah Mosque, a parade of holy places in fiction 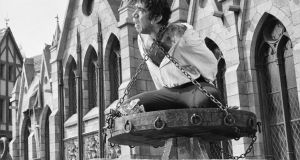 Anthony Quinn as Quasimodo in the 1957 film adaptation of Victor Hugo’s The Hunchback of Notre Dame. Photograph: John Springer Collection/Corbis via Getty Images

Since Chaucer there has been a long and rich tradition of writers creating imaginary religious buildings, cathedrals and churches in their novels. Sometimes the churches are all too real. One only has to think of Victor Hugo and The Hunchback of Notre Dame to see the powerful imagery that can be created through writing about a cathedral.

There are others who have been inspired by certain churches when writing their novels. For Proust, in his classic À La Recherche du Temps Perdu the Church of Saint Hilaire was based on the Church of Saint Jacques in Illiers-Combray. In The Name of the Rose, Umberto Eco was not only inspired by the Sacra di San Michelle, an imposing monastery on a mountainside located in Piedmont, but also by the abbey located at Moissac in France.

Closer to home, James Joyce could not escape the impact of the church seen through the eyes, words and actions of his fictional characters. In Ulysses, the central character is, like myself, Jewish but still spends much time in church or obliquely influenced by their liturgical ceremonies. Joyce is never happier than when mocking his characters’ relationships to the liturgy. For example, in Dubliners there are plenty of pious characters who are mocked for not really understanding the doctrine. Joyce, himself knew the doctrine all too well.

When it comes to inspiration for writers, it’s not only the most recognisable churches and cathedrals that move the creative dial, or often even require that much effort at disguise. The Nine Tailors by Dorothy Sayers features Fenchurch St Peter, a magnificent Anglican structure, which is not a great distance, or leap of imagination from St Peter & St Paul’s in Upwell where she lived at the time. Fenchurch St Paul is central to the novel’s plot.

Similarly Barbara Pym’s A Glass of Blessings, a novel that provides a window into 1950s England, has St Luke’s church central to the novel’s narrative. Indeed, it is the setting for many episodes, particularly the comic ones that set the tone for this under-rated novel.

Even children’s stories can find their way to enjoying the benefits of a church setting. Coincidently, not far from Upworth, the Reverend Wilbert Awdry – he of Thomas the Tank Engine fame – was vicar in Emneth where he wrote 12 Thomas books in his 11 years while also ministering to his flock there. In one of his stories, Thomas and the Tank Bells, the famous steam engine had to deliver the church bells to Vicarage Orchard.

Imaginary churches aren’t compulsory when it comes to the great creative minds writing fiction with strong religious overtones and messaging. In The Power and the Glory, Graham Greene rails against anti-Catholic purges in Mexico without needing to name the imaginary buildings he evokes so powerfully. Evelyn Waugh converted to Catholicism in 1930 and, as widely acknowledged, in his Brideshead Revisited published in 1945, religion permeates throughout the story. Interestingly, the novel ends with fiction echoing Waugh’s own life with his narrator Charles Ryder’s implied conversion. Some consider it the “greatest Catholic novel of the twentieth century”.

In her writing, Iris Murdoch is never far away from a church, fictional or otherwise. When it comes to invention, rather than lurk on imaginary architectural foothills, she likes to go right to the top in (think that there may be a clue in the title) The Time of Angels where she writes what some have characterised as a death of God soap.

Some contemporary novelists, especially younger ones, even if they grew up within a strongly religious community, defy the imperative to create fictional religious building. A case in point is Eimear McBride, who grew up in Tubbercurry but, it seems, Russian literature and drama along with the buildings of St Petersburg have been far more influential upon her imagination and fictional worldview than the churches and religious buildings she grew up seeing much more frequently.

When it comes to stirring sincerely held strong religious feelings, few can equal Salman Rushdie who grew up on Malabar Hill within walking distance of the magnificent 15th-century Haji Ali Dargah Mosque. Though name-checked as itself by Saleem in Midnight’s Children, Rushdie prefers to channel his religious imaginings elsewhere in this novel rather than also create fictional religious buildings.

The central character, if you can call a building that, of my latest novel – the Chiesa di Santa Maria church in Florence – is a fictional amalgam of various existing Renaissance Florentine churches. These, of course, include the Basilica San Lorenzo and the Santa Maria del Fiore. My own foray into creating fictional churches was heavily influenced by the composite features of many stunning Florence churches. Of course, the Basilica San Lorenzo was my first reference point. It was a real inspiration, not least because it is a beautiful Renaissance church with Brunelleschi’s fingerprints all over it.

Like so many fictional religious buildings, when you enjoy reading about them, the actual real churches, cathedrals and mosques that inspired their authors invariably repay a personal visit.
The Indomitable Chiesa di Santa Maria by Daniel Peltz is published by Book Guild Publishing