Grace’s Day by William Wall: a novel that wallows unhappily in itself 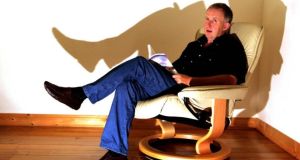 William Wall’s latest novel tells the story of two sisters, Grace and Jeannie, who are subjected to some unconventional parenting. At the behest of their father, a successful nature writer, they and their mother live a throwback neo-agrarian existence on an island off the west coast of Ireland. He is often away on book tours and the girls, who do not attend school, are socially isolated – “information comes to us as a kind of pleasant static from another country” – and practically feral. Like many a child of Sixties hippies, Grace wonders if her eccentric upbringing has damaged her: “We should have been happy, secure, loving people but we were not.”

The story revolves around two events: the death of their younger sister, Em, who falls from the island’s watchtower, and a tangled sexual intrigue which is breezily summarised by Grace at the start of the novel: “Richard Wood was a poet and my father’s friend, but he was of course also my mother’s and my sister Jeannie’s lover.”

The narrative perspective alternates between Grace and Jeannie, following them both into adulthood. Jeannie resents her father and considers his metier a faddish fraud: “The reality was a few lines of salt-blanched kale. The reality was trying to rot seaweed for fertiliser and having to live with the sour fish smells. Agriculture practised at the most desultory level.”

She moves to East London and becomes a geologist, her interest in rocks and fossils an apt cipher for her meditations on narrative and memory – “The slow deposition of meaning that is a life lived, a tale told.” Grace, who has always been closer to her father, becomes a psychologist and marries a man named Bill who reminds her of him. The marriage is an unhappy one, and when they are on the rocks Bill taunts her by saying: “You knew I’d be like him.” The story’s denouement features a dramatic showdown that calls to mind Thomas Vinterberg’s classic film, Festen (1998), in which a powerful patriarch is confronted by the long-repressed grievances of his adult children.

Grace’s Day pays a backhanded compliment to the various intellectual traditions it draws upon. Grace’s self-effacing disparagement of “All that Freudian shit” is only semi-ironic; her references to Electra and Oedipus are invariably qualified with an acknowledgement of their cliché status, a scepticism echoed in Jeannie’s remark that she finds psychology “tiresome, a kind of literary criticism of dreams and chance utterances masquerading as science”. And yet the entire novel is suffused with the stuff.

In a similar vein, Jeannie is withering about her father’s nature writing – “I often think his idea of nature is really a wild patch in someone’s back garden” – but the narrators’ internal monologues are punctuated with naturalistic vignettes and travelogue-style descriptive set-pieces. Here is Grace recalling a stolen afternoon on a boat with Richard Wood: “The mountain sheep knew the way, those that came to the island. The seabirds and the cliffs knew. The seals, the dolphins, the fin whales. Their sinuous bodies found the seaway without pain.” Wall’s descriptions of early-1970s Dalston poignantly evoke the homesickness and poverty of Hackney’s Irish diaspora, amid the “rag-tag roofs of east London, its merry gables and hips and saws and scallions and mansards and pavilions”.

Perhaps the author is trying to have his cake and eat it; alternatively, by deploying well-worn tropes whilst ventriloquially highlighting their tiredness, he is making a subtle point about the limitations of certain motifs and interpretive frameworks that are particularly prevalent in contemporary literature. At any rate, writing and writers do not come out well in these pages. The charismatic Richard Wood is every inch the portrait of self-absorbed literary egotism. Grace wryly observes that he is “quite well-known for a poet,” and he says pretentious things such as: “What I love is the imperfections, perfection is a dangerous myth, what we need to love is our immanence not our possibilities.”

Grace’s Day, which is William Wall’s fifth novel – he has also previously published three volumes of poetry and three short story collections – exudes the weary cynicism of a man who has been around the literary block. It is fascinating to encounter a novel that feels, for all the elegance and poise of its prose, so wallowingly unhappy in itself; comprising, as it were, its own lukewarm review.