A late change of plan may have saved our lives 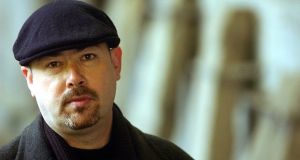 Dr Paul Burgess: his new novel is both brooding thriller and satire for the insane times in which we live

We have all at some time engaged with that most retrospective of tropes; “I remember where I was when I heard that…”

Every generation has claimed it. You know the kind of thing. “I remember where I was when I heard that John Lennon had been shot”; “when JFK was assassinated”; “when Houghton/Armstrong put the ball in the English/Spanish net.”

For many, perhaps the most iconic image that defined our zeitgeist was the unforgettable appearance of the twin towers under attack. For me, this event contains a particularly personal resonance. Why?

Because I remember exactly where I was on the morning of 9/11. I was in Newark airport, NYC, preparing to board a plane to Las Vegas for the honeymoon trip of a lifetime. A late change of plan perhaps saved our lives that day. Moreover, the experience would provide the impetus for my novel Through Hollow Lands.

The proposed road trip with my wife, Mary, was to take us to San Francisco, Las Vegas and LA. There was no little deliberation regarding the itinerary. Where should we make our first port of call? Eventually, after much discussion and last-minute rebooking, we chose Las Vegas over San Francisco.

Flying into Newark in the early morning of September 11th, we had to hurry to make the connection to Las Vegas. On arriving, jetlagged, we collapsed into sleep. A telephone call from home in Ireland awoke us. Mary’s brother enquiring after our safety and urging us to switch on the TV.

Unforgettably, there was the now instantly recognisable effigy of the smouldering twin towers. Later, when more details emerged, it became apparent that the terrorists had been targeting west coast flights (as they were more heavily laden with high-octane aviation fuel.)

In that moment, I realised that had we chosen the San Francisco option we would have been on board the doomed Flight 93 that was to tragically crash into a Pennsylvania field later that day.

With all flights grounded and rental car stock exhausted, the ensuing days spent trapped in the seeming purgatory of Las Vegas were to prove the most surreal of my life and afford a creative catalyst for my writing.

In many respects, to die at the hands of Islamic extremists that day would have prompted a certain irony – the darkest of sardonic twists of fate – for someone who had grown up in working-class west Belfast throughout the worst of the Troubles.

It can perhaps be claimed with some confidence that by most measures, my personal and professional journey from the loyalist heartland of Shankill Road, to the leafy campuses of University College Cork (via Oxford University and a spell in the UK top 50 record charts) has proved something of “a life less ordinary”.

My Twitter handle rather blithely describes me as; “novelist /songwriter/musician trapped inside the body of an academic. All views are my alter-ego’s”. In truth, it is to some degree an accurate summation.

I had a less than stellar school career, a troubled youth in a troubled Belfast comprehensive, but still owe a debt of thanks to the herculean efforts of a few talented and committed young English and history teachers. They earned their spurs in this toughest of learning environments and inspired me to pursue a career in education in the process.

I worked for a while in Short Brothers aircraft manufacturers before leaving to pursue a BA in English literature at the University of Ulster under the tutelage of the late poet James Simmons.

Above all, I was encouraged by key actors along the way to develop a “critical consciousness” and that has stayed with me throughout both my academic and creative writing. I hope it is evident in the work that I do today at UCC in training community activists. (Two lord mayors of Cork and counting!)

This same quality was perhaps brought to bear successfully as a songwriter and performer with my band, Ruefrex – Belfast in the Troubles era being a particularly fertile environment for young punk rockers.

Ruefrex achieved commercial and critical success with the release of seven singles and three albums. Most notable amongst these was the scathing commentary on American funding for Irish republican violence, The Wild Colonial Boy, which entered the UK top 30. The British music press described my writing as, “a line of poetry written in a splash of blood” and labelled Ruefrex as “the most important band in Britain” at that time.

The band played a prominent role in cross-community, anti-sectarian ventures and actively lobbied and raised funds for the (religiously) integrated education movement in Northern Ireland.

Soon after, I was afforded the opportunity to attend Oxford University on a scholarship, studying ethics and moral education.

On graduating in the early 1990s, I returned home and threw myself into community relations and conflict resolution work.

Then everything imploded on one swelteringly hot July day when I was diagnosed with advanced heart disease at 39. Triple bypass surgery was required.

Feelings of incredulity were followed by anger then trepidation. Everyone I met seemed to say, “you’re very young for that” until it turned into a kind of benign but infuriating mantra!

It was perhaps inevitable that I should seek catharsis in some respects, with a semi-autobiographical novel. White Church, Black Mountain (Matador Press) is a political thriller, dealing with the emerging “post-conflict” society of Northern Ireland and exploring the legacy of the Troubles and how its residue impacts on those who seek to build a personal and communal future in its aftermath.

I had the immense pleasure of having my writing style compared to two of my literary heroes, by Northern novelist Colin Bateman; “… just sucks you in. Like Brian Moore given a makeover by James Ellroy”.

With Through Hollow Lands, I have relocated my focus to New York, Las Vegas and the Grand Canyon. The novel is both brooding thriller and satire for the insane times in which we live.

I believe that the events of 9/11 marked the beginning of the moral slide to where the US languishes today and I have attempted to provide a tortured, shadowy chronicle to it all.

So if it now seems that I have packed a lot in along the way, I can only reflect on the periodic reminders that I have experienced personally; of our fragility and impermanence; of the randomness of events and of the need to embrace fully, second chances.

Enlightenment values in the face of fundamentalism and Donald Trump are something that we are (incredibly) fighting to maintain in the early 21st century.

Be assured, these are dangerous times and nothing can be taken for granted.