The Saturday poem: The New Information 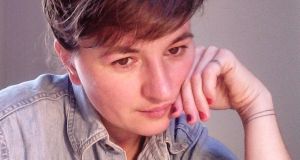 When it seems my estranged mother
can’t grow stranger, my father tells a story:
years before they met, she, twenty-six,
and her not-my-father, had an accident
leaving the dance, and she was thrown
from the sleigh. The year was 1967,
year one of Ceausescu, contraceptives
vanished, and it became illegal to abort –
This was, “to build the future workforce.”
This man and the State now indistinguishable,
he promised to reward the ‘heroine mothers’
who bore at least ten children. Few had more
than two or three. Ten thousand women
bled out in botched back alley jobs, neither
heroines nor mothers, for the next two
decades. My father says, “Your mother’s
obstetrician and his patients went to jail,”
and I reach for something that’s not virgin,
mother, widow. But no special name exists
in my adopted language for a woman
no longer one, and not the others. “But why
wasn’t her name among the rest?” I ask.
He makes the sign of notes greasing between
the thumb and forefingers. This happened
before the drunk driver carved the crescent
scar under my mother’s fringe, before
her two-year old son seized from fever,
before immigration, divorce, televised
revolution, her woman-loving daughter,
before the runners for her father’s cart
were laid to rust by the pig shed. I see her,
bundled in embroidered shearling, articulating
her arc through the night air. The horse
silently hoofs the ground, as quick to calm
as to spook, as innocent. My not-yet-mother,
village beauty, future chemist, chestnut hair
tumbling, dusts off the snow and death. A pearl
of blood quivers on her lip. A hardness to last
all of our lives stiffens behind the bone
where her head had kissed the iron ground.