Review: Land of Dreams: Ethnicity, Nationalism, and the Irish in Newfoundland, Nova Scotia, and Maine, 1880–1923 by Patrick Mannion 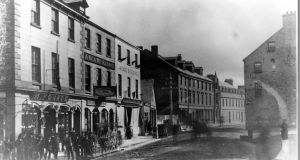 Book Title:
A Land of Dreams: Ethnicity, Nationalism, and the Irish in Newfoundland, Nova Scotia, and Maine, 1880-1923

When members of the Benevolent Irish Society gathered in St John’s, Newfoundland in 1882 to celebrate St Patrick’s Day, the festivities began with a series of toasts. The first was to “the pious and immortal memory” of St Patrick, the next to Queen Victoria and the royal family. Only after displaying deference to the monarch did they drink to “Ireland as she ought to be”.

The phrase expressed “a desire for peace and prosperity in the ancestral homeland”, Canadian historian Patrick Mannion notes, “as well as implied support for Irish self-government, though only in the form of a dominion within the British Empire”. The call for Irish freedom was muted – especially in the midst of the Land War and as Fenian extremists were ramping up a campaign to bomb and terrorise British cities – and reflected the need for Irish descendants living under colonial rule to be circumspect.

Mannion explores what it meant to be Irish a century ago and an ocean away from Ireland in A Land of Dreams, a study of how immigrants to three port cities in eastern North America retained and expressed their Irishness. “Engagement with the politics of the ancestral homeland,” he writes, “was the most direct, unambiguous manner in which those of Irish birth and descent expressed their ethnicity.”

A member of the history department at Boston College, Mannion compares four decades of life in the Irish communities of St John’s, his hometown, Halifax, the capital of the Canadian province of Nova Scotia, and an American city, Portland, Maine. Strung out along “the eastern prow” of the continent and facing the Old World, these communities demonstrate the impact of time, place and political circumstances on the Irish diaspora.

The cities are clustered along the coast (Halifax is in the middle, Portland about 350 miles west and St John’s is 560 miles to the northeast) but the Irish experience varied. A minority in the Nova Scotia and Maine ports, they accounted for a majority of the population of St John’s during the period covered by the study, 1880-1923. Backgrounds and arrival dates are another variable. The Irish began arriving in Halifax and St John’s in the 1700s and were drawn from the southern counties, while Portland’s Irish were mostly Famine refugees from western Ireland. They did have one thing in common – the communities were overwhelmingly Catholic.

Mannion focuses on how charitable and fraternal organisations and the Catholic Church helped the Irish build and maintain a sense of community. Local organisations devoted to helping the poor were joined by the Ancient Order of Hibernians, which was founded in New York in the 1830s to ensure “the preservation of Irish culture” and established branches in Portland and Halifax. St Patrick’s Day events and parades – the Irish in St John’s first took to the streets in 1851 – became an annual celebration of a common heritage.

The political context dictated how each community responded to Home Rule, the most pressing Irish issue of the day. Newfoundland was still a British colony, which accounts for the muted support of Irish self-determination in those St Patrick’s Day toasts. The Irish in Halifax – a British military outpost and headquarters for the Royal Navy’s North American squadron – also treaded lightly on the issue.

In Portland, as in other American cities, there was no need for the Irish to show deference to Britain. The Maine city, for instance, offered stronger support for the Land League than its coastal neighbours. But local leadership, political rivalries and press attention, Mannion found, influenced each community’s response to Charles Stewart Parnell’s drive for self-government.

Portland’s Irish displayed less interest in Home Rule than their counterparts in Canada and Newfoundland, who embraced the proposal as an Empire-friendly solution to the Irish Question.

Mannion extends his study through the Easter Rising and the Anglo-Irish War, when support for Irish independence reached its zenith in each community. Again, national borders determined the response. The Irish in Halifax and St John’s, long accustomed to British rule, supported self-government and dominion status within the Empire while their Portland cousins, citizens of a republic, backed the republican cause and independence.

This is a deeply researched, detailed account, with a scholarly tone and presentation that’s designed for an audience of academics and specialists. But it’s filled with historical nuggets (who knew that out-of-the-way Halifax was on high alert for a Fenian attack in 1885?) and insights into the Irish experience in the US and Canada. It also introduces smaller communities and regions often overlooked in histories of the Irish diaspora.

The book’s title comes from a letter written in 1920 by students at a Newfoundland school, who described Ireland as “a land of dreams” they knew only through “the medium of song, story and history”. Mannion’s book demonstrates how expatriates such as these, several generations removed from their homeland, preserved and asserted their Irishness.
Dean Jobb teaches nonfiction writing at the University of King’s College in Halifax. His new book tells the true story of Dr Thomas Neill Cream, a Victorian-era serial killer who murdered at least 10 people in Canada, the US and Britain.

Ennio Morricone, genius: ‘I didn’t know I was doing anything new or revolutionary’
4