Paschal Donohoe on social media and the death of democracy 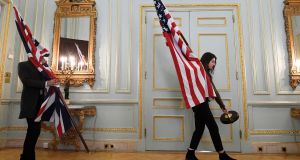 UK and US flags: The future of international co-operation is at stake. The challenges facing the UN, the EU and the Paris Accord are obvious examples. Photograph: Toby Melville/AFP/Getty

Foreign Affairs, a leading journal of international relations, recently dedicated an entire volume to answering one question – “Is Democracy Dying?”.

The editor pointed to the undermining of democratic institutions, the weakening of civil liberties and the use of public office for private gain as evidence of decline.

He noted that some believe that this is the worst setback since the Great Depression and the early stirrings of fascism and that “it will continue to retreat unless rich countries find ways to reduce inequality and manage the information revolution”.

Those who hold this view are described as optimists; “pessimists fear the game is already over, that democratic dominance has ended for good”.

This starkness points to an uncomfortable truth. The last decade was devoted to rescuing our economic institutions such as banks and the foundations of our shared currency, the euro. It is looking increasingly likely that we are now in a period of similar struggle for our political and civil institutions.

The future of international co-operation is visibly at stake. The challenges facing the United Nations, the European Union and the Paris Accord are obvious examples of this challenge.

The freedoms of journalists and civil society organisations can no longer be taken for granted in some parts of the world where we hoped these rights were settled.

These are not separate and unrelated periods of change. Some of the causes of these periods of economic and political flux are common. The movement of capital, investment, people and vast amounts of data through nation states has seismic consequences, that are both political and economic.

The publication of these excellent books is therefore timely. While focusing on separate dimensions of our discontents, the themes and issues are interwoven. Amid a surge in such publications on a changing world they stand out for their clarity of analysis and writing.

The Populist Temptation, Economic Grievance and Political Reaction in the Modern Era by Barry Eichengreen identifies the economic roots of our political challenges.

The declining fortunes of early 19th-century English hand-loom weavers and the fate of American midwestern farmers due to monopolistic railway owners are the opening examples of how economic prospects shape the contours of political possibilities.

At times of intense change and dislocation, voices are raised, anxieties are heightened. However, as the introduction notes, “the problem is that political institutions are not malleable. By design, they are hard to alter, precisely in order to prevent the players from changing the rules in the middle of the game.”

The creation of a welfare state by Bismarck in the 1880s, the Social Security Act of 1935 by Franklin D Roosevelt and the expansion of the welfare state after the second World War are leading examples of political responses to seismic change.

Radical at their time of introduction, these new institutions quickly became foundations of the social contract between the citizen and the state.

The slowdown of economic growth after 1973 slowly began the erosion of this contract. The growth in American national income slowed to 1.2 per cent between 1973 and 1992, down from 2.4 per cent in the preceding period. Governments, Eichengreen argues, underestimated the income and employment effects of global trade.

Centrist politicians, lulled into complacency by economic growth, were bewildered by Brexit and the election of President Donald Trump. However these developments were nearly inevitable as “The populist temptation is greatest when economic concerns fuse with identity politics and when the two are inadequately addressed by mainstream parties.”

The book starts and ends with political institutions: “all political systems are imperfect. But some are more imperfect than others.”

These political imperfections and their causes are the focus of Ctrl Alt Delete, How Politics and the Media Crashed Our Democracy. Tom Baldwin, the author, worked as political editor of the Sunday Telegraph and assistant editor of the Times. He then worked as communications director for the British Labour Party during the 2016 general election.

The title is the three-fingered manoeuvre used to restart stalled computers. A similar approach, this book contends, is needed to save democracy.

Saving is required as “the rotting smell that permeates democracy means the decay has gone deep”. The personal experiences of the author give an authoritative perspective on the causes of this rot.

This book covers now-familiar ground on the impact of social media on politics. However, this is laced with burning insights from life in the political arena.

Baldwin excoriates standards in his former profession. Turning a dark lens to British journalism he writes “Britain did not need Macedonians producing false news standards when our own indigenous industry was doing the same thing under the mastheads of old Fleet Street.”

Under pressure from declining circulation, falling advertising revenues and the demand for instant comment, he contends that some of the behaviours of British journalists are not too different to the wild excesses of social media.

Politicians are equally culpable, leaders rendered from genuine engagement with citizens by the lure of big data. Seeking to divine the intentions of their electorate from rows of harvested data, they abandoned the genuine interrogation of national hopes and fears.

With a verve typical of many passages in this book, Baldwin writes that “Mainstream politicians had effectively locked themselves in a windowless room with only a laptop, while populists or even more sinister figures prowled outside the gates. And darkness was coming . . .”

Similar to Eichengreen, he argues that centrist politicians must engage, that they have been too quick to surrender. Elections must be protected, electoral laws must be strengthened to recognise the reality of new technologies.

With the burning passion of a citizen who cares and the skill of a professional communicator, this book is not a lament, but a demand to do better. The stakes are too high – nothing else will suffice.

These books are deeply worried, but not without hope. Whether the hope is false or not can only by determined by all who care about public life. Our efforts have more hope of success if the warnings, recommendations and exhortations of these authors are heeded.

Remembering Jimi Hendrix 50 years on: the guitar god and the Irish connection
4